Not a Basketball Fan

The screaming has continued. 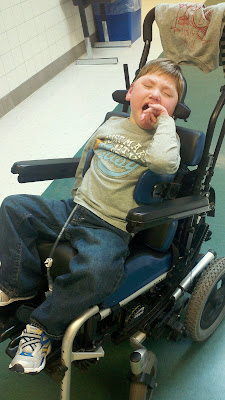 He did it Friday night (but slept fine that night).  Then Saturday.  It started as soon as we picked him up from his bed.  It continued that morning, then to the car, then to Carter's basketball game.
I tried to watch the basketball game from the hall while I walked Brayden back and forth.  Then I found a vending machine...a very loud vending machine.  I parked him by the vending machine to see if the noise would help calm him down. 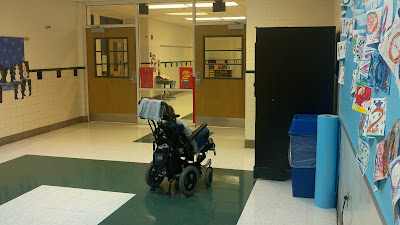 It did...for about two seconds.  Then back to the screaming.  I walked him some more, he looked like he may go to sleep but obviously the noise of a basketball game was not helping.  So I parked him down the hall in a little corridor, a bit away from the noise.  I stood at the door of the gym to watch the game and watch Brayden parked down the hall in a corridor. 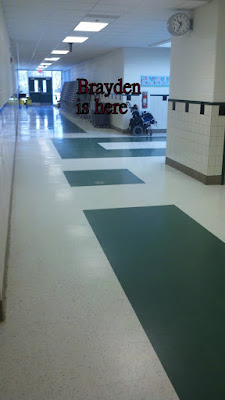 Well, that corridor was not far enough away.  So I parked him further down the hall in the janitor's doorway (not pictured because my camera phone could not zoom that far).  I stood at the door to the gym while I watched Brayden (or the back of his wheelchair) down the hall.
Did I mention the random strangers offering their advice on calming him down?  As if I was not grouchy enough already.
Brayden has been to basketball games before and even ones at this gym.  It is not just the lights and sounds at the basketball game that were bothering him...he started before we even left the house.
Oh and Sunday...he was a gem.  Totally fine.  He went to church, to lunch, all fine.  But don't worry it started back up again today with school and at home.
He is only truly content, on days like this, if he is in his bed (that is not ok with me and will blog about it later).
Posted by Jenkins at 4:18 PM

Oh I am just so sorry. It's so hard to know what to do during times like this. Sending my love!