Behind the scenes of our hospital visit

Brayden is not an only child. He has two wonderful big brothers who are 6 and 4.

We do our best to not have them upset by the ever changing events surrounding Brayden's medical care. This summer has been busy for the big brothers, lots of camps and they have really enjoyed it. Carter, the oldest, was signed up for football camp but Luke was too young by 1/2 a year. The coaches for the camp saw Luke's enthusiasm for football and offered for him to join the camp too (Luke was so excited he smiled the entire week). Little did I know what a gift that would be, for the Tuesday of that week was when Brayden entered the hospital. What a wonderful blessing to have Carter and Luke in the football camp having a great time. Since we had no idea when Brayden was coming home we frantically tried every day to arrange help with them after camp. Carter and Luke were 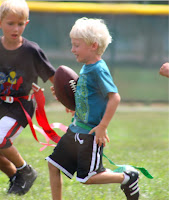 with some one different almost every afternoon but they got the royal treatment from pool time to yummy snacks (that mommy would never allow so they enjoyed it even more). Jeremy and I would talk to them every afternoon to check on them and they always seemed to be having a blast.

I would handle the day time at the hospital while Jeremy was off to appointments for work or just running home (we were an hour from the hospital) for a shower and to check on the dog. Everyone was back and forth some where.

Since Carter and Luke were staying with other people, Jeremy did the long night shifts with Brayden at the hospital, I was home alone for a few nights. Arriving home some nights way after my bedtime, I was walking into a dark, quiet, empty house. I was not scared, mostly lonely and desperately wanting everyone home. One afternoon last week there was an attempted break-in in our neighborhood. If you are not familiar with Waterford...well stuff like that just doesn't happen. I am by no means an alarmist, still felt safe coming home at night by myself.

Then come Friday morning, 4:45 a.m. It is dark outside, when you live out this far there are no street lights. The door chime went off, a chime that beeps twice when a door or window is opened in the house. I sat straight up in bed. Did I really hear the door chime? Then the house alarm went off and the dog was barking like a mad woman. I grabbed the phone and called 911. I was shaking so bad that I could barely push the numbers. I spoke with the dispatcher and was having problems hearing her over the alarm but explained to her I was home alone and wanted someone to come out. Then the alarm stopped and started up again. Then stopped again. I attempted to read the alarm panel to see what was happening and I realized that I did not have my glasses on...reading was not going to happen. But I realized, I did not set the alarm...I do not even remember how to set the alarm. I was still freaked out by the door chime and the dog barking like crazy. I sat and waited for the police to arrive. When they arrived they searched inside and out and nothing was found.

I think that it was a problem with the alarm system since I did not set the alarm. I was definitely not going back to sleep so I headed in to the hospital.

The chaos behind the scenes.
Posted by Jenkins at 5:28 PM

Seriously, and as if you haven't had enough craziness...glad everything was okay, though.

Oh my goodness, how scary for you..glad it's behind you.

I have been behind in my blog reading so I am just catching up with yours. I am so glad that Brayden is home from the hospital. I pray that you are able to get some clear answers. I cannot even imagine how frustrating and exhausting this roller coaster has been for you and your family. I hope that the change is seizures meds brings about a positive change in Brayden's health.

What a blessing it has been for you to have such caring people helping with your two older boys. I am sure that took a load off your mind while you were taking care of Brayden's needs.

The incident with the alarm sounds absolutely terrifying. I think I might have had a heart attack!