Clinic, Lab, another Clinic, to ER

Yesterday was long.  I knew that it would be long but no idea it would be for twelve hours.  This post will be long...
By the end of the day, Brayden had hospital bracelets on every extremity. 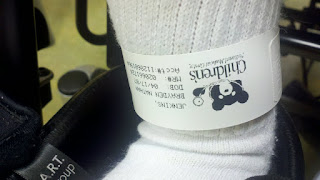 We (Brayden, his nurse and I) headed downtown to Children's.  A drive that became a 2 hour and 20 minute ride.  We finally arrived for the ketogenic clinic (the special seizure control diet).  The neurologist and nutritionist were happy to see Brayden looking healthy since the last time they saw him in person was back in the spring.  Brayden has been on the diet now for 1.5 years.  Since he is gaining weight and handling the diet quite well now (after some serious weight loss), we are going to increase the diet for, hopefully, better seizure control.  Still a few questions about one medication (Diamox) and how his pancreas continues to handle the diet. 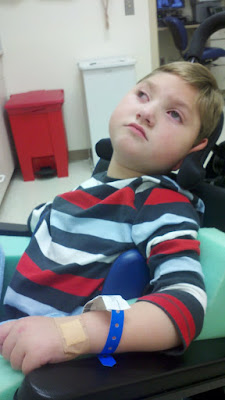 As part of the ketogenic clinic, Brayden has lots of blood work done.  We headed upstairs in the hospital for the lab.  I believe I saw 16 vials that needed to be filled.  I have learned to request certain people to stick Brayden.  He is a hard stick and we don't need people trying then calling for the "person who always gets it".  First stick and we got blood for a few vials but then it was gone.  Second stick, a slow a painful draw that filled more vials but then that vein was done.  Third stick and another slow dripping of the blood but the vials were finally full.  Did I mention Brayden is SCREAMING the entire time.
We left the lab for the cafeteria.  I dined on the usual pizza.
Then we headed to the orthopedic clinic to meet with the orthopedic surgeon and the physical medicine doctor.  We waited for 1.5 hours to see the doctor.  When we finally made it back to the examination room, my phone rang which surprised me because I do not get cell reception in the bottom floors of the hospital.  The call was from the neurologist at the ketogenic clinic.  Some of Brayden's labs were back and his potassium was "dangerously low", she wanted us to head to the ER.
The orthopedic surgeon came in to tell me that it would be just one second.  I politely (not really) said, "We have been here all day, waiting for you for way too long and now we are told that Brayden has to go to the ER because low potassium.  I have waited for this appointment for three months, I am not taking him to the ER until we can talk to you."  He did talk with me and the physical medicine doctor in the hall of the orthopedic clinic.  He showed the x-rays of Brayden hips.  Both femurs are not placed very well into his hip socket.  His bones did not form/angle properly for them to ever fit nicely into the hip socket.  This could mean a lot of hip displacement, pain and problems for Brayden.  The orthopedic surgeon said that Brayden needs to have surgery on both legs/hips.  Basically breaking his femurs, putting rods in to properly align everything.  WHAT?!  That is some serious surgery.  I asked as many questions as I could think of in that moment, standing in the hall.  We are scheduled for another appointment with ortho surgeon in two weeks since this did not really count as an appointment.  (if Brayden's pediatrician or ped nurse is reading this...I need to talk about this to make sense of it all...is it something that is necessary...it sounds like a very big deal for Brayden).

So to be honest, I completely blocked out the conversation with the orthopedic surgeon as we dashed down the hall to the ER.  We headed for more waiting but at least the neurologist called ahead of time to let them know we were coming and what needed to be done.  We made it back to a room and again more waiting.  We were told that if the labs did not come back looking better then Brayden would be admitted to the hospital.  If the bloodwork was better, then we were headed home.

Meanwhile, Jeremy is trying to decide what to do.  I have nothing to stay overnight with Brayden and I have his nurse with me.  What to do if Brayden is admitted?  So Jeremy, Carter and Luke started to drive downtown.  The weather was terrible which means the traffic was terrible. 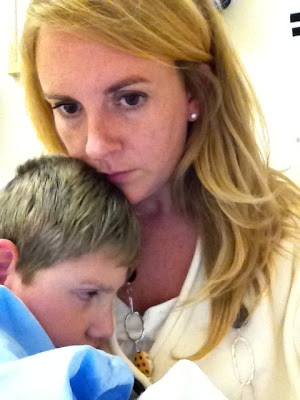 We waited and waited in the ER.  Finally someone came to take Brayden's blood and give him an IV.  Then we waited again.  Brayden was miserable.  He surrendered to a little nap once I rocked him for a bit.
Did I mention that it is 7:00 p.m. at this point?  Finally the results came back and things looked better, his potassium was within the normal range.  I have no idea what happened, we just packed up and headed out as fast as possible.

I called Jeremy to let him know.  And wouldn't you know it, he was just a mile from the hospital after a 2.5 hour drive.  He turned around, the boys had not eaten so they were headed toward food.

We drove home and crashed.

So if you see me this weekend and I am a tad grouchy then you know why.

And we still have one more appointment this morning (Fri) with the ENT dr to discuss Brayden's sleep apnea.

Ughh. You guys need a break. Just wish I could help somehow...

I am exhausted for you just reading this. So thankful Brayden didn't have to stay over last night. PMR/Ortho needs a major overhaul - new office managers to put that place into shape and they have to hire additional doctors. Praying for you guys. xx