Not much going on in our house this week. We have been waiting to hear from the doctors. Brayden's tube is loose/leaking and needs to replaced. We would like to have an appointment instead of waiting and waiting around like we had to do in the past. Hoping that we would get in sometime this week, I kept the schedules light.

Today was a free day, nothing planned. Luke and I dropped Carter off at a friend's house and ended up staying for a couple of hours. Carter goes to kindergarten with this little boy. The mom and I rarely get a chance to sit down and talk so this morning was nice. She has a brother with severe disabilities. It was interesting to hear her take on being the sibling and how her family has coped and is coping with her brother's needs. I relayed my concerns about Carter and Luke being the brothers of Brayden, how their life is affected. She found that she is a better person for having her brother in her life...that was nice to hear.

After leaving their house Luke and I picked up Brayden and his attendant to go to the park. Luke has recently come to love the swings (who wouldn't, flying through the air like that!). He spent most of his time swinging away. Then Brayden got in on the action. This park has a few handicap accessible things, one being a swing. Brayden enjoyed the gentle swing and almost fell asleep. We loaded him in the swing with his feeding equipment (yes we are still on 20 hour feeds out of a 24 hour day), propped his head with his pink fuzzy pillow and he was set! Brayden has not been in a swing since the fall and could only handle it for a short period of time. It was great to see him really relax in it this time. 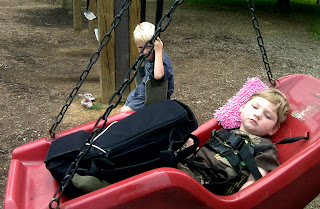 Of course it was the one day I did not have my camera so I had to make due with the phone camera.
Posted by Jenkins at 10:34 PM

Cheers for parks with handicap accessible swings! So glad B enjoyed the movement - so soothing. I will be praying for a appointment this week to have his tube replaced/adjusted.

It's great you got to go a park and they had fun, you all deserve a some fun. Great park.

I'm so glad you guys got to get out! I have never seen handicap swings--I didn't know they had them! That's awesome! I wonder if I could find one in our area for Dakin...