Brayden is doing much better after many hours of replenishing him with IV fluids. He was started on J-tube feeds with Pedialyte through out the afternoon and then started his formula in the evening. If all goes well then he will be discharged tomorrow. We have learned the rule for leaving the hospital is to pee, poop and eat. If those are accomplished successfully, then the papers will be signed to go home.

For once the excitement was not with Brayden...it was all about Carter and Luke today. Jeremy picked them up after they spent the night with their Grandma & Papa. They started their day with a trip to their cousin's swim meet, they were excited to cheer her on. After that it was off to the river for some outside time with the dog and a chance to get dirty (apparently Luke accomplished that quite well). They went home for a quick clean up, ran some errands and came to the hospital.

Carter and Luke came to say hello to Brayden and then Jeremy treated them to lunch in the cafeteria, which they loved because they were allowed to get a bag of chips. While they were at lunch I set up the Play Station in Brayden's room for them to play video games. They were thrilled. A little bit later, Carter, Luke and I

headed out to catch the movie UP at the old Tally Ho Theater in Leesburg (and yes the floor is unbelievably sticky and gross, the place is a mess). They both laughed and laughed at the movie, it was cute. Meanwhile Jeremy and Brayden were attempting a nap.

The boys and I arrived back at the hospital. They played more video games, I sat with Brayden and 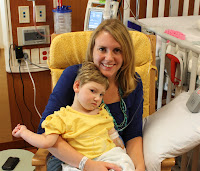 Jeremy headed out to grab a bite to eat and get some fresh air (not really fresh, it was so humid here in NoVA that you could hardly breathe). Jeremy came back and we hung out some more in Brayden's room. Carter requested bedtime prayers with Jeremy before we headed home. Luke cried about leaving daddy and Brayden. 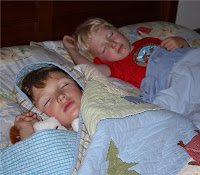 Carter and Luke crashed together in Luke's bed seconds after their heads hit the pillows. And yes Carter sleeps all wrapped up like that and Luke sleeps with two old blankets that need to placed a certain way.
Brayden was happy to have his brothers around today. He has not slept much but once his brothers arrived he had a nice long nap, with them as the back ground noise.
Posted by Jenkins at 9:36 PM

I am so glad you had such a great day, which is so ironic considering Brayden was in the hospital. :) You truly made the best out of it! I hope Brayden is able to come home today - so glad he is doing better. The photo of Carter with the blankets is adorable!

Love all the photos. Your family is absolutely adorable!