I wished a had more pictures of Brayden from our trip to Williamsburg but it was too cold (we even had snow during spring break).  He was wrapped up in blankets and not loving the idea of making himself available for pictures.
But I did get just a few... 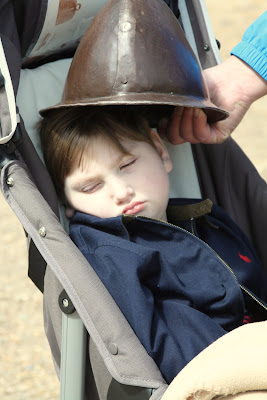 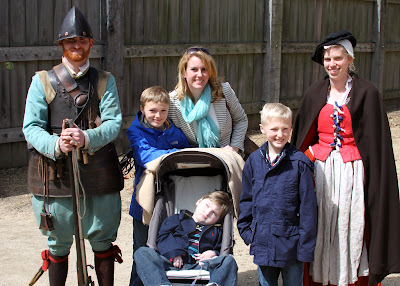 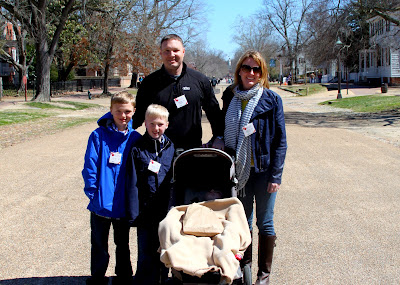 One thing I learned about the colonial times...we were not getting Brayden around.  The days of touring the area did not provide Brayden much respite from the winds.  Someone would stand outside with Brayden while the others went inside to look around.  Brayden was not too pleased about the weather and he let us know.  He did handle it pretty well but he made us aware of his limits.  For lunch in Colonial Williamsburg, we planned where to go but then quickly realized we could not get him in the buildings.  We did find one that had a back ramp exit so we enjoyed a nice lunch.

While we were in Colonial Williamsburg, I received messages from the ER and from his doctor.  Brayden not only had the Flu type B but his cultures grew and he had a UTI.  Well, I guess he was allowed to fuss a little...being sick and all.

After the outside adventures, we stayed at the Great Wolf Lodge (quite an interesting place).  Carter and Luke loved the water slides and Brayden loved the never ending sound of water, he was so content just sitting at the water park for hours. 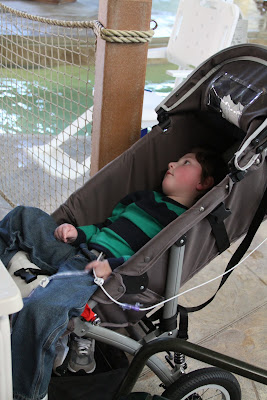 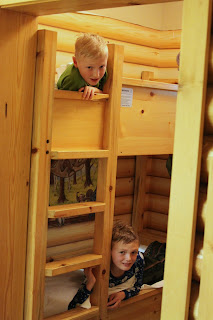 Brayden acted like such a big boy because he shared the little log cabin in our room with his brothers.  I told him he was camping with Carter and Luke.  The funny thing was, Brayden was a little too excited.  In the middle of the night we could hear Brayden kicking his legs and making his happy noises.  Carter would then talk to him not realizing that talking to him only encourages the noise because Brayden was excited to have him right there! 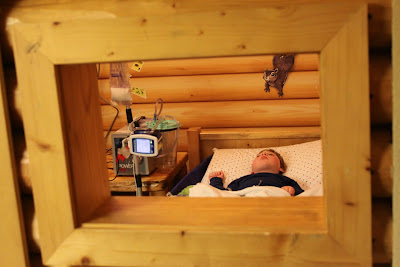 He looks so cute laying in his cabin bed! Looks like a fun vacation destination! Glad you were able to make the trip, despite his illness and all the stress before you left!

What type of stroller/wheelchair is Brayden in, in these pictures? Looks like a nice one for Gavin!