Am I fight or flight

Can I be both at the same time?  I fought to get out of town and fly down the highway.  I had to get away.

So the story starts a few weeks ago.  Jeremy has been traveling a lot the past several weeks.  The boys still have a lot of activities (of which Jeremy usually helps take to and from).  I have been taking Brayden out a lot and many times past his bed time to make it to his brothers activities.  And then getting him home is a task, his bedtime routine is tedious and takes some time.

Then Luke got sick.  At first we did not think it was much, just a normal kid thing when they get a fever and to goes away as quickly as it came.  But this time it did not go away.  I had to take him in, only it was a Sunday night.  Luke and I (and Brayden was coming along with me since Jeremy was with Carter at basketball) headed to Patient First.

Luke was getting more miserable by the moment.  A few tests and it came back that Luke had the Flu type B (the flu with respiratory problems), even though he had the flu shot which should cover this type of flu.  Luke was very contagious and not able to go back to school for several days.  We also missed the window to opportunity to take Tamiflu.  Luke was down for the count for an entire week.

Brayden had Botox in a couple of days so we had to keep Luke away from him.  A couple of days later Jeremy was laid up at home.  I still had to run the boys to all of their activities (a few too many).  Then Jeremy headed out of town again.

On Monday night Luke had a birthday party about 45 minutes away.  Carter had basketball practice as well.  His practice time was changed and the new time was 8:00-9:30.  I only had the nurse until 8:00.  We all had a very late night and I was getting overwhelmed and grouchy.

I felt like I was running around every where to get everything done.  And no time to catch up at home.

The next morning Brayden started to look under the weather.  Major constipation, major.  A little bit of a fever.  And his resting heart rate was really high, in the 160s when he was sleeping.  His blood sugar was spiking in the 150-160s.  What to do?

Oh did I mention we planned to leave for Williamsburg that afternoon.  I had not packed a thing yet.  And in case you did not know I am a packer, a planner.  I like to get everything very organized a head of time for any trip.  I thought I was going to pack while the boys were at school.

Rewind to two years ago, we had the similar trip planned and we had to cancel because Brayden ended up in the hospital.

I sent the boys to school that morning, they were thinking that as soon as they got home we were loading the car for Williamsburg (Jeremy was still out of town and meeting us a few days later).  I decided not the send Brayden to school and call his pediatrician.  It was decided it was best to take Brayden to the ER.

Off to the ER.  A few tests and it came back that Brayden had the Flu type B...great.  Got him some medication and we were going to "work out" the constipation issue at home. 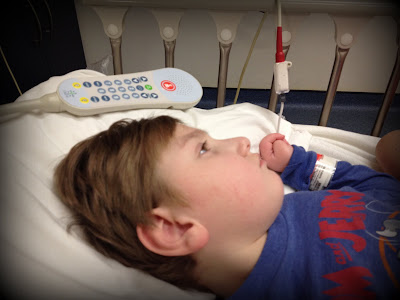 I was still planning on leaving for Williamsburg in a few hours.

On our way home, Brayden, his nurse and I were on the country roads of Waterford and I hear a loud pop/bang.  My tire blew.  I watched the tire pressure dropped to 8 in a matter of seconds.  I drove to the Waterford school parking lot.  I hopped out of the car and saw a very, very flat tire.

I did my best not to burst into tears or start cursing like a crazy person.  I called AAA and texted Jeremy (not really the best text I have ever sent...it might have sounded a little crazy) who is still out of town.  We waited and waited in the parking lot.  The AAA guy came, put on the spare tire which is a very different size than the tires so I cannot drive the car other than to the shop (the tires are special order and take a couple of days to come in).

Tears did come when Jeremy called to check on me.  I begged him to get me out of town, I needed it and I did not want to disappoint the boys.

My father-in-law came to the rescue.  Followed us home and then drove me to his house to get his Hummer for us to drive to Williamsburg.

Was it a still a good idea to go?

Um, yes.  I never get out of town and this was not going to be canceled.  Lord, are us telling us to bail on the plans or persevere?  I went with the persevere option.

It is 3:30 p.m.  I have not packed a thing.  The nurse helped me gather Brayden's things.  Carter worked to get some things while Luke and I had to run the dog to the kennel.  The boys and I packed in about 45 minutes.  More things tossed in the suitcases and then the back of the Hummer.  I have no idea how I fit it all in but the boys and I made it happen, there was a lot of shoving.

We were going to Williamsburg.  I was fighting to fly down that highway.

We finally left the area around 6:00 p.m. (after a pit stop at the pharmacy for more of Brayden's meds).  I was beyond stressed.  The boys knew it, I think they sat in silence for most of the ride.  And I was starting to get really tired.  We finally arrived around 9:30 p.m.

Brayden was doing pretty well.  But a couple of days later the ER called.  Brayden's cultures grew and he also has an UTI.  More medication.

We still had a good trip to Williamsburg.  Now I need another vacation to actually relax or a really long nap.  Oh and I still need to get my car to the shop, I left it in our garage and decided to ignore until we got home.
Posted by Jenkins at 3:06 PM

um. that is insane. positive note? we didn't have to think about/stress about "staffing" the nursery for conversations :-)

ohmygosh. the day from hell. i think i would've been crying and cursing long before the flat tire.