A honeymoon period.  It is what the doctors like to call the period right after we increase Brayden's seizure medication and/or ketogenic ratio...for a few weeks it seems to make a wonderful difference, less seizures and less time, then he adjusts and we start to see an increase in seizures.

Brayden still has his daily "iron-cross" seizures (he looks like a gymnast on the rings...thus why we call it an iron-cross, not a medical term in any way, just the way we describe it).  Those last for about 30-60 seconds.

Brayden has another type of seizure that is the cause for some concern.  We visited the ketogenic clinic, it see the neurologist and nutritionist.  This particular type of seizure last around 15 minutes, it happens many times after he wakes up.  The seizure is a large convulsion/jerking, always in the same direction.  He stops for a few second and then a big jerk.  This goes on for about 15 minutes.  Thankfully is causes him no distress (unlike what it does to the people watching him); his heart rate is not elevated, he is breathing fine and for the most part he is coherent.

The doctor is calling it myoclonic cluster seizure.

But what to do about them?  Obviously he cannot do it for 15 minutes.  Yesterday he had one that lasted about 25 minutes.  Yes we do give him Diastat but we do not want to give him a Diastat as often as he is having these myoclonic clusters, he would be snowed all the time.  We are increasing his ratio on the ketogenic diet.  He will be at a 3.75 to 1 ratio (don't worry if you have no idea what that means), the higher ratio should mean better seizure control.  If the increase in ratio does not do the job then we will look at changing his seizure medications.

A long day at Children's in DC (a 2+ hour drive in), met with the keto team, then Brayden was ordered some labs, so we headed upstairs.  We try to do all the labs as a one-stop-shop, so we try to get whatever labs he may need for any of his doctors in one stick (the marked up lab sheets below, some of the tests required a few vials...thus meaning lots of vials to fill). 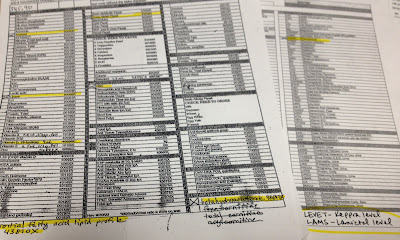 And we have learned to ask for the right guy in labs, he always does a great job finding a good spot for Brayden's veins (Albert is his name, been doing it for decades and on his off time, volunteers as an EMT, ask for him if you need labs at Children's National).

No word on the labs which usually means "no news is good news".  Brayden's labs are checked often because of effects the ketogenic diet and his medications can have, not to mention his unexplained anomalies. 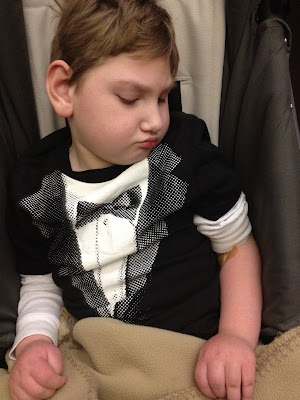 He is not too pleased with getting the blood work nor being gone all day.

Then we arrived home just in time to get Carter and Luke off the bus.  To which we discovered Carter had a large unexplained rash that was quickly spreading all over his body.  We rushed into the pediatrician (and we live about 45 minutes from the peds office).  No clue what is rash is/was, given some cream and steroids.  I did find another get use for our medical gloves...I love Carter but I was NOT touching that rash.

The doctor then to eat.  We dined at Bone Fish, just so I could have the Bang, Bang Shrimp.  The boys did homework there because we were not driving all the way home, just to drive back for Luke's wrestling practice.

All in all Brayden handled the day pretty well, although he had one grouchy look through it all.

Did I mention Jeremy was out of town all week too?!  Long days around here.
Posted by Jenkins at 6:58 PM