Brayden was put in the stander this week. 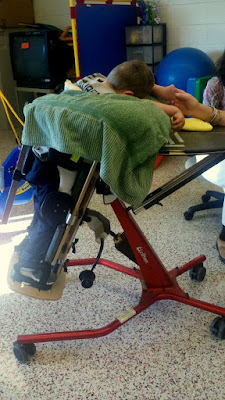 He has not been in the stander since early March (before the broken femur, botox and hip problems).

When Brayden was first starting the stander, over one year ago, he would scream and fuss.  It would take him about 10 minutes to settle down and be able to tolerate being upright in the stander.  So, leading up to this week in the stander was me being worried about it.  I checked with the physical med doctor twice to make sure that when she said "Give it a try", she really meant give it a try.  We have learned that some doctors say "give it a try" and they are really saying "don't do it but you are the parent so I can't really tell you what to do."  Anyway, Brayden got cleared from the physical medicine doctor and PT at Children's to try the stander again, despite the problems with his hip.

I was fully expecting Brayden to be mad/irritated/hurt/stressed/etc when put back in the stander after many, many months of not using one.  I went to school to talk to the physical therapist and Brayden's teacher while we tried him in it.  The PT scooped up Brayden put in the stander, I held my breath...


Brayden acted like it was something he had be doing all along.  It took Brayden almost an entire school year, last year, to be able to tolerate the stander.  He finally built up to being in it for 30 minutes or so.  This time, trying it after his leg and hip problems, we set a goal for him to be in the stander for 10 minutes.  About 5 minutes in, he feel asleep, standing up.  He remained comfortable for 15 minutes, then they wheeled him down to the front office to deliver the attendance, wheeled him back to the classroom...still not a cry or even a whimper.  He was in the stander for over 20 minutes without any problems.
Now the stander will be part of his daily routine.  I guess he has grown up. 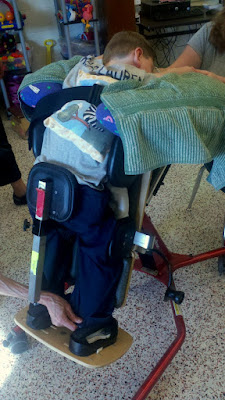 That is wonderful! Don't you love it when our kids surprise us, in a good way?