Pool to relax, Panic from Puke 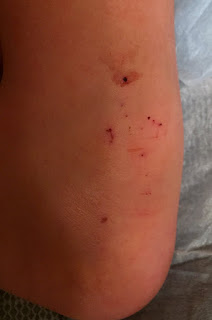 His little body went through so much at the hospital.  I am still in shock from how far things went and how he ended up in the PICU.

Once we were back to the rental house, Brayden needed a bath.  We started to remove all of the bandages and band aids.  His arms and legs look like someone took a baseball bat to them.  I realized that he had about 12 places where he had an IV or an IV was attempted.

Remember he had an arterial line, that took 2 hours to place (when we were told it would not be very long)?  Once we removed the bandages, we discovered why it took so long.  I was told the arterial line was going to be placed on top of his foot and it ended up being around his ankle.  The top of his foot and ankle area has over 15 spots where they tried to place the arterial line.  15 places.  Now I know why they closed the curtain on us and why Brayden was given anesthesia.

To decompress from it all, this weekend we headed back to our actual home for a swim in the pool.  Thankfully the pool is still working since it is on different electric.  The water was a bit cold for Brayden but he quickly settled in once he found his place on the raft. 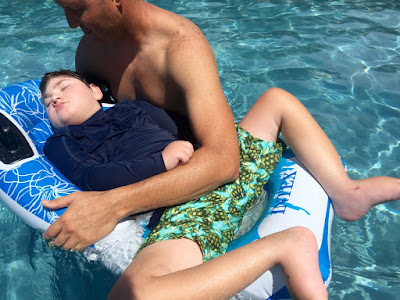 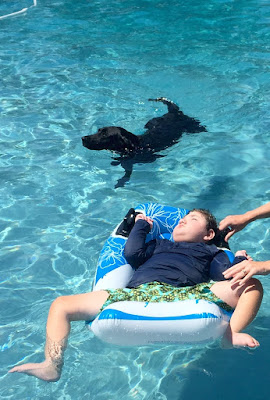 Things seemed to be going well.

This morning I walked in to start his morning routine and found him COVERED IN BLOOD.  He vomited blood.  It was like a scene from a horror movie.  Rolling out the sides of his mouth.  His chest and arms covered.  And the biggest casualty in all of it was his beloved tiger (you see in many pictures), who seemed to be the landing spot for most of it.  I shouted for Jeremy in a panic.  We have not seen this bloody emesis in years.  I have absolutely no clue as to what would cause it.  We have pictures of it but it is just too graphic to post, we hold on to the pictures to show the doctors.

Jeremy and I cleaned him up and his bed (tossed tiger in the trash).  He slept most of the day, praying he sleeps tonight.

Since he has been up to his regular feeds for a few days, we haven't seen enough stool.  And now I don't what to do for him.  We see the pediatrician tomorrow.  Children's Hospital contacted us the day after he was discharged to set up more appointments and tests (barium enema, sitz marker, anorectal manometry, colonic manometry).  Brayden will be busy the next several weeks.  Pray we find the best way to help him.
Posted by Jenkins at 7:01 PM