Brayden made it out of the hospital. 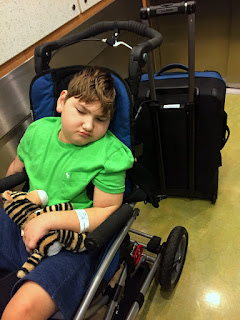 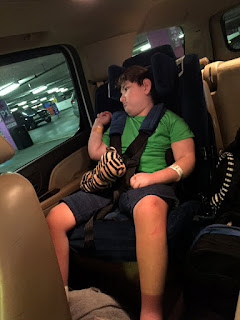 Before we headed out, it was a very busy morning with rounds and rounds of doctors.  I forgot that it is only August...in July everyone moves up in the doctor world; new med students, med students move to residents, etc.  The first rounds this morning included 12 people.  Then rounds with GI.  And finally rounds with the fellow and attending doctors.

All said Brayden was ready to be discharged.  All of that happened before lunch time.  But we did not receive the discharge papers until 7 hours later...crazy frustration.  We finally headed out of the hospital, much later than I anticipated. 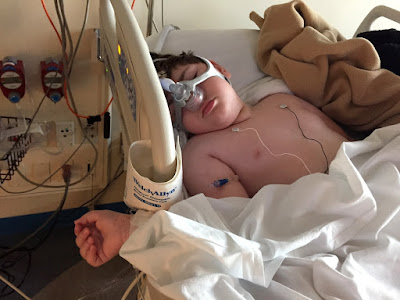 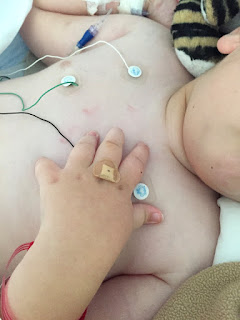 Thankfully Brayden was feeling much better.  How do we know?  He scoots around the bed. 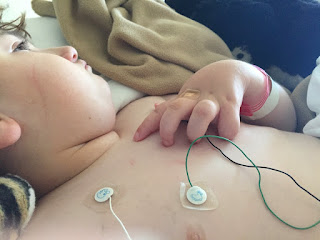 And his new trick this summer is to hold on to cords, whether it be his drain tubes, feeding tubes, monitors.  He wraps his fat little fingers around them and holds it like a lovey.  He drove the nurse nuts on the general floor because he was tugging and would set the monitors off.

Brayden has a long list of appointments and tests that will need to be done over the next month.

As I went over his discharge papers, I finally saw in black and white the reasons Brayden was sent to the PICU.  His electrolytes were a mess (possibly from being dehydrated and/or the results of over using enemas), which caused problem for his heart and kidneys.  Scary to see the list of problems.  Thank goodness we drove him to Children's that night.
Posted by Jenkins at 9:32 PM

Nice post. Well what can I say is that these is an interesting and very informative topic on ostomy supplies near me