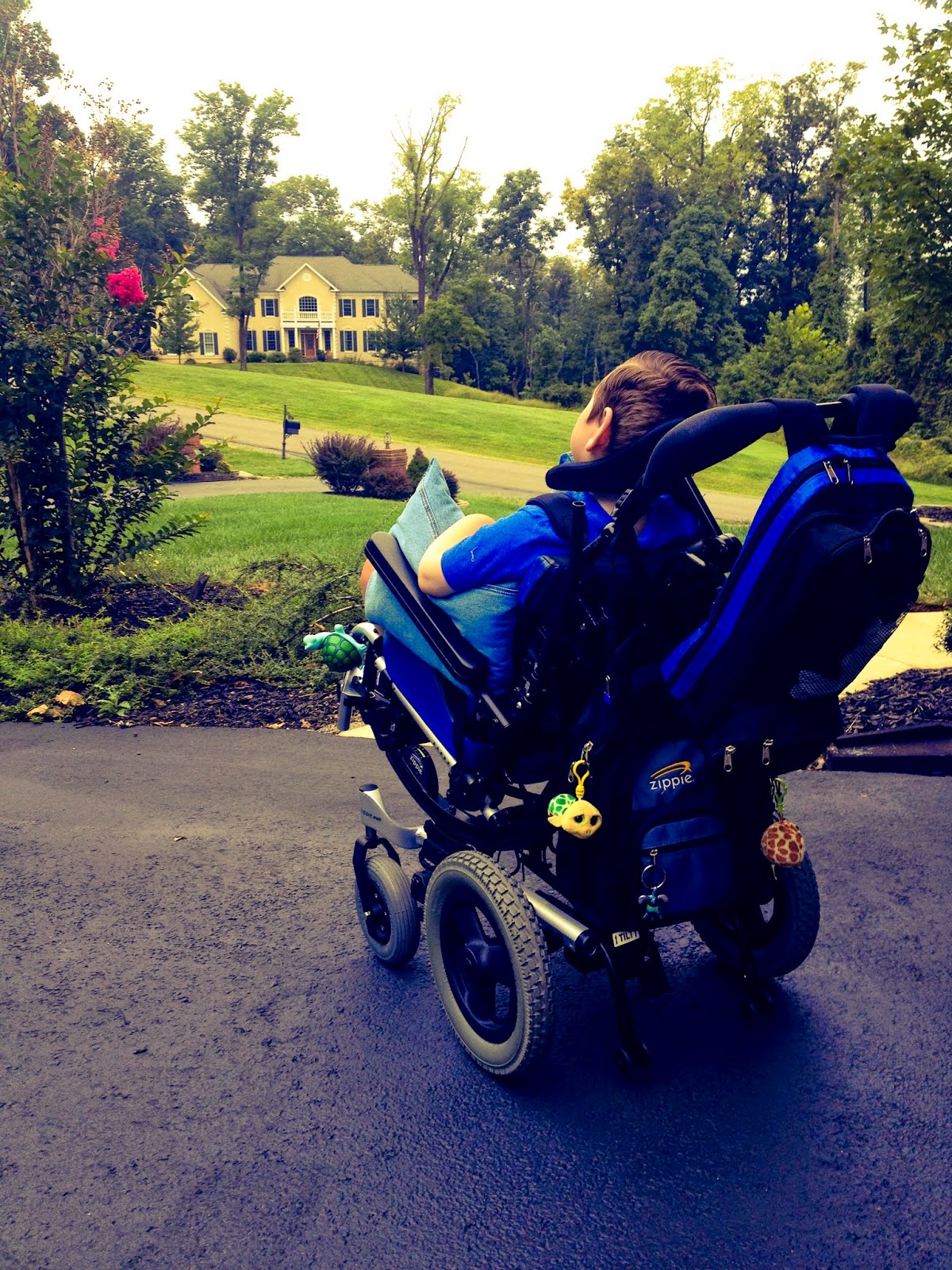 This is Brayden waiting for the bus.
The bus never came. We were told NO bus for the first week of school, so I drove him. Told bus would be there Monday, NO bus. Assistant principal called transportation, told him we had a bus, but NO bus again on Tuesday morning. We originally heard that over 60 special ed kids in our county have had major bus mix ups this year (later to find out it was more than 100). Most of these kiddos attend school outside their community and need to get to a school that can serve them. Now many have missed school or been tardy because of transportation. Even once they are at school, transportation has been unreliable; one girl was there after school for an hour because a bus never arrived, another child given the wrong route (thankfully the school figured it out before the bus left), bus showing up for children that don't even attend that school anymore.
Transportation offers no explanation or apology, they hadn't even been answering the phone.  It is ridiculous.
Sending your special needs child off to ride a bus is terrifying.  Brayden's first couple of years I followed the bus on several occasions.  You have to put a lot of trust in transportation...I believe that trust has been broken this year.
Tuesday I dropped Brayden off at school, again.  I attempted to call transportation.  No surprise, they did not answer and still had not called me back from a few calls last week.  I cannot believe they would not take care of the most vulnerable students.  The more I thought about it, the more bothered I became.  The assistant principal at Brayden's school had been working hard to work with transportation but was getting no where; and it is the start of school so he has many other responsibilities.
I came home and called the Superintendent's office.  I talked with his assistant and she directed me toward an Assistant Superintendent who over sees transportation.  He listened.  I explained the problems, stressing that I was not the only one with the problem, the problem was huge.  I stressed that our assistant principal was working hard to fix the problems but not getting any real resolve.  The Assistant Superintendent was kind and seemed completely unaware of the special ed transportation problems.  He apologized and promised me that I would hear something back shortly.
I politely told him that I was headed back to Catoctin to pick up Brayden at 2:00 because I had to get back to Waterford in time to get my other children.  So you can imagine my surprise when a woman from transportation met me in the parking lot while I was picking up Brayden, calling me by name.  She attempted to explain the situation...funny thing is we got a different explanation than the school and the bus drivers; she told me that the person who coordinated it all left in July and all the info was locked in her email. The school was told the bus drivers forgot the route.  And the bus drivers were told the school did not send the paperwork in time.  Any parent that does an IEP and transportation request, knows that we complete that paperwork long before the previous school year has completed, many people sign the forms and we get hard copies once submitted.
After the woman from transportation explained Brayden's bus times and route, I asked the woman to go in to the school office to explain it all because Brayden was not the only one (I would like to assume that was her plan any way).  After she left I met Brayden's afternoon bus driver in the parking lot who told me that Brayden's morning bus driver and afternoon just got the schedule this afternoon...thus Brayden (and I am assuming other kids) were not planned for at all.
After I left the school, the Special Ed Transportation Director actually called me back (not so friendly), tried to offer some explanation and go over Brayden's route.  Then Brayden's school called to check that I got the same info as they did.
Talking to the Assistant Superintendent got things moving, rather quickly!
Come Wednesday morning, Brayden's bus arrived.  And in a separate car, the woman from transportation came as well, to make sure everything was working out.
Brayden loaded the bus. 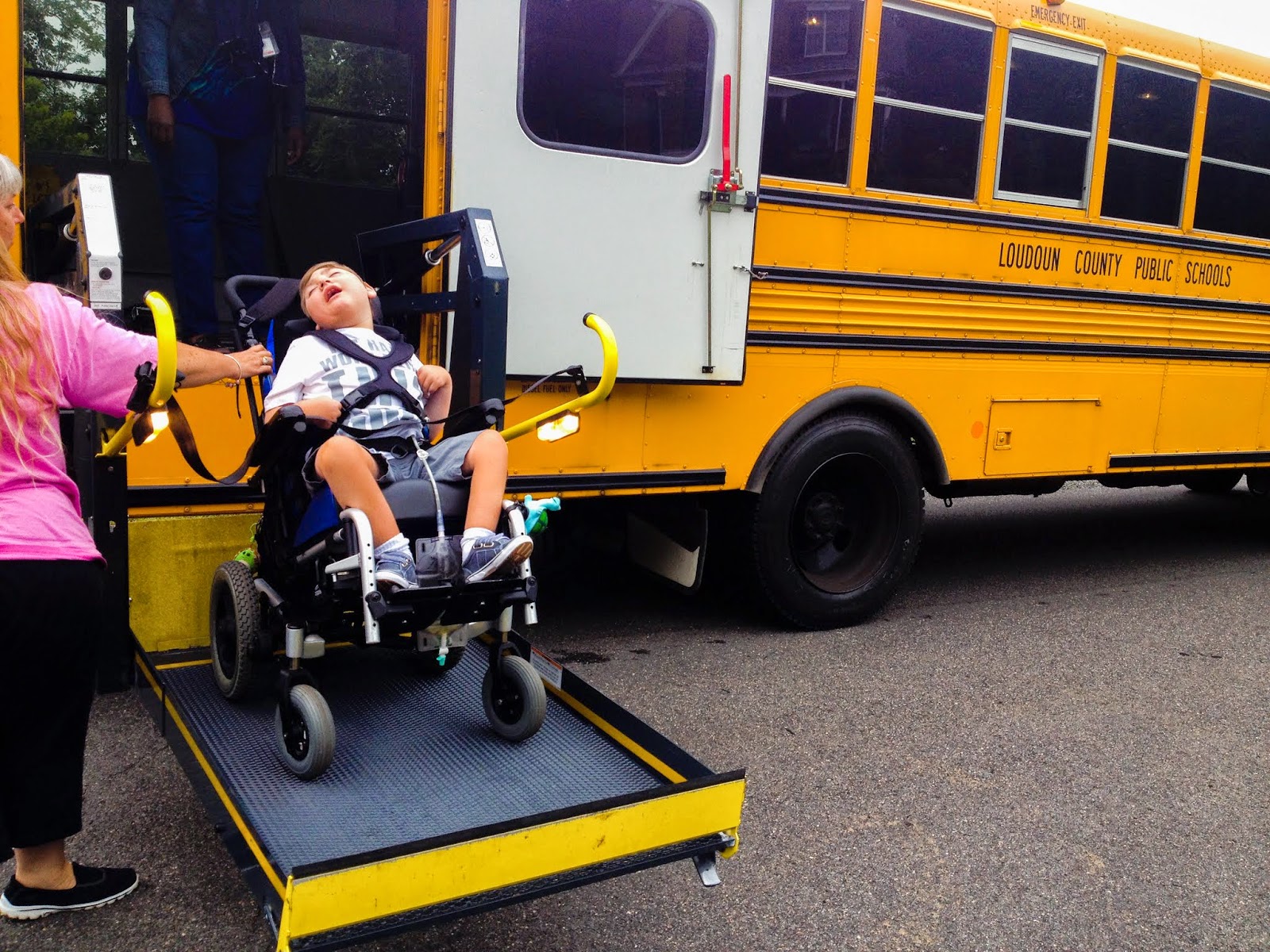 I was happy to see the bus...Brayden not so much. 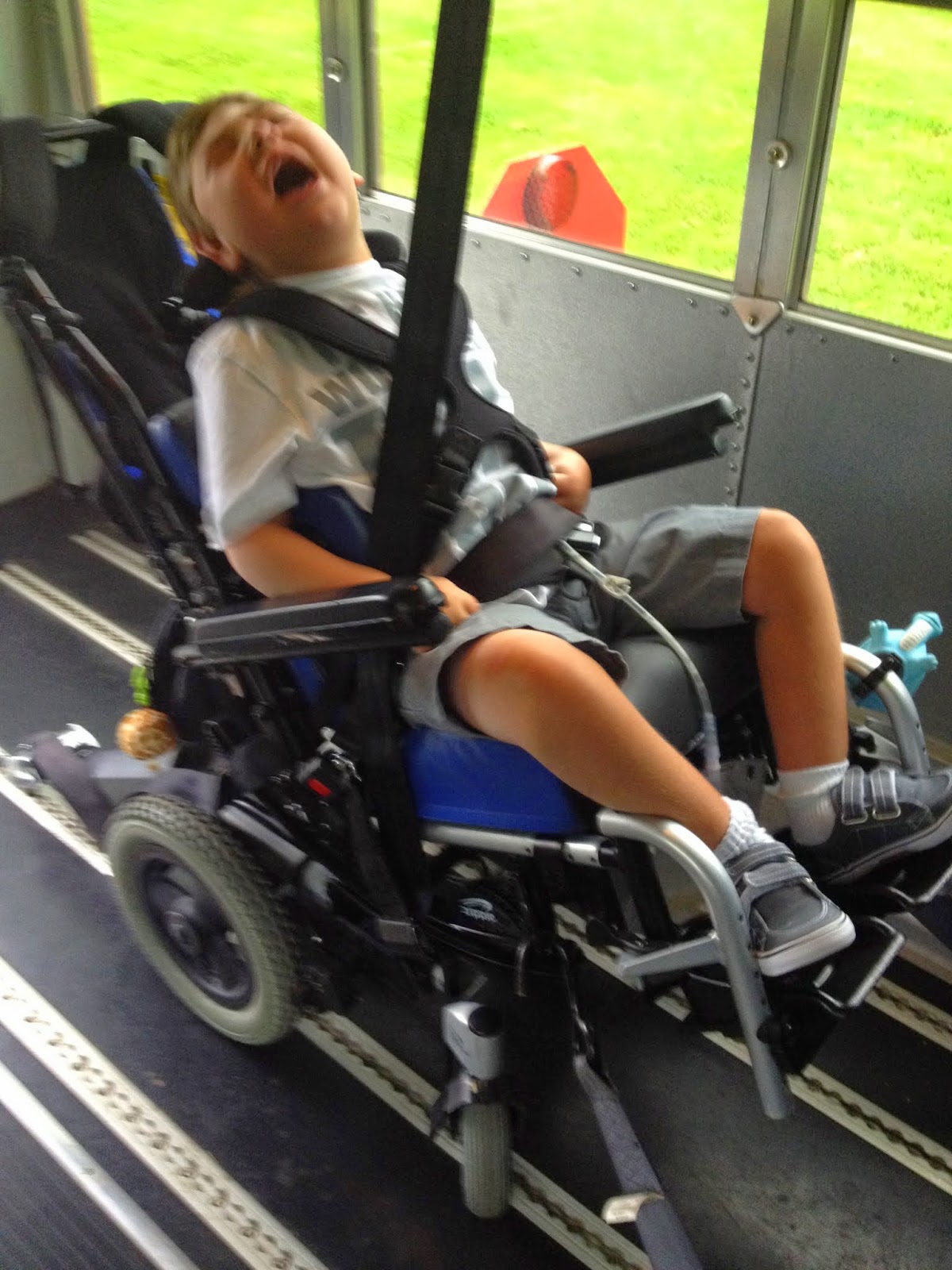 Brayden's afternoon bus brought him home, no problem.  And it worked out for the rest of the week.  I only hope it is working for the other kids.
I still cannot believe transportation was such a mess, they offered no truthful explanation (only offering an untruthful explanation that suits who they are talking to), and certainly has not offered a real apology.  This is Brayden's 5th year at the school, buses have never been so unreliable.  Oh the stress.
Posted by Jenkins at 6:59 PM

Carrie - you should send this to Channel 9 call for action; http://www.wusa9.com/local/call-for-action/.
Maybe they can get some answers and at the very least they might be able to check on the other kids in the county.