So Starts the Wean

Brayden is coming off the ketogenic diet in order to improve his bone health.  He has been on the ketogenic diet for about half his life, 3 yrs and 8 months on the diet.  The ketogenic diet puts the body into ketosis by eliminating all sugars and every derivative of it (in shampoos, toothpaste, sun tan lotion, medications, etc.).  We have carefully watched every little thing he gets.  We have carefully mixed and measured his food (Ross Carb Free Soy Formula, Microlipid, Elecare Junior, MCT Oil, Lite Salt, Vitamin and water, just in one batch).

The ketogenic diet literally has been life changing for him...and I am not being dramatic.  It has really been that good for his seizure control.

Before the diet he had over a dozen major seizures every day (and I didn't even count the little disappearing ones) and we were at the ER every month for seizures we could not control at home.  So many times he had seizures that lasted hours and hours.  Many that were terrifying; for a long time Jeremy and I thought we would loose Brayden to a seizure one day.  Brayden had seizures that we were not sure he was ever going to come out of...some that lasted over 8 hours (to our local ER, then transported to Children's in DC) with more medication that it would take to put a horse down. 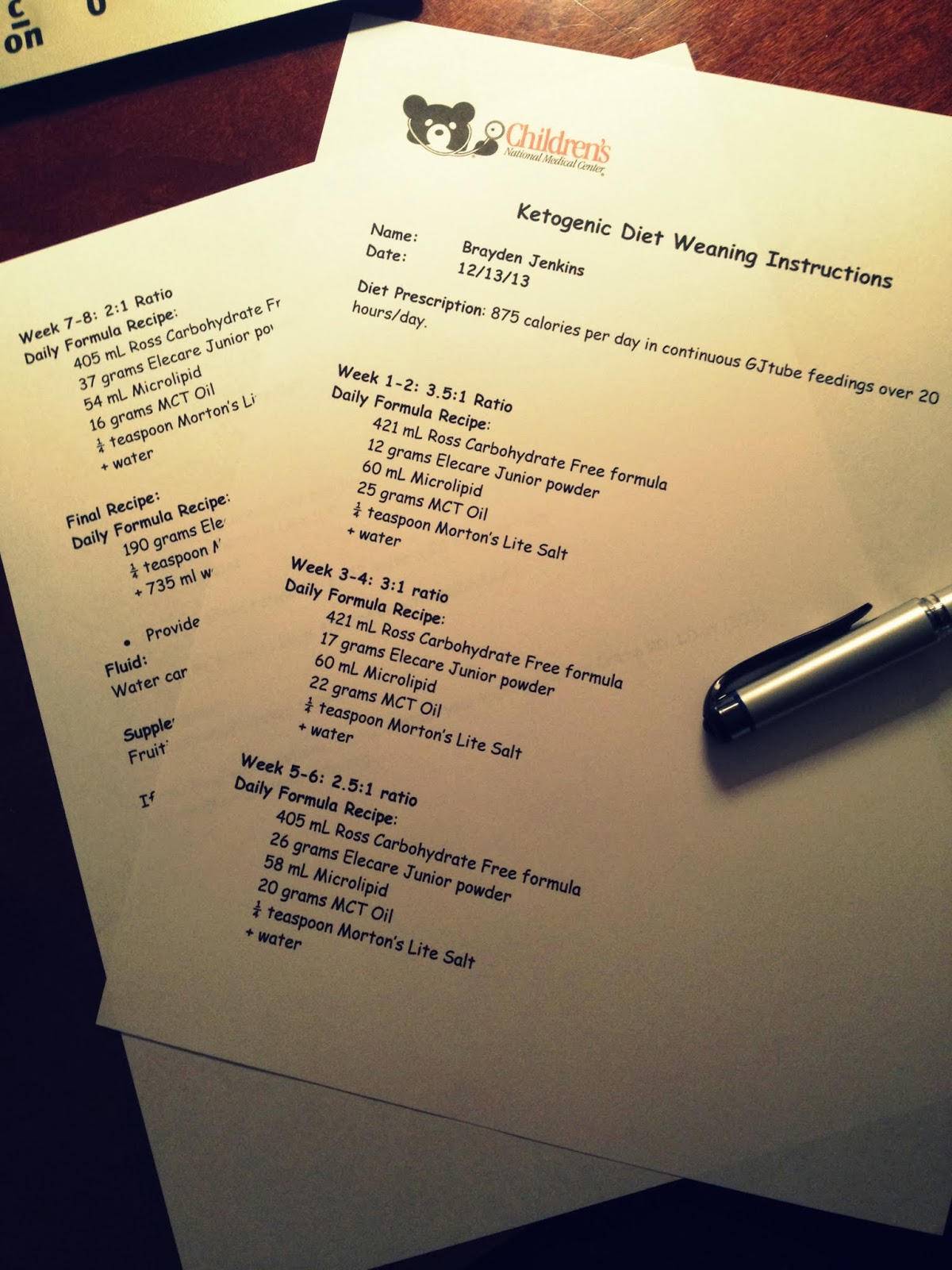 Once on the ketogenic diet, Brayden's seizures only happen 1-2x a day, and if there are more we adjust his keto diet and it helps.  Not only have his seizures been under control, Brayden has blossomed.  He is not overwhelmed with constantly having seizures or being completely snowed with medication.  So we have seen his personality so much more.

The ketogenic diet can (and hopefully will for Brayden) almost snap the body out of those bad patterns of seizures so that someone can come off the diet still doing better than before they started the diet.  Typically, someone is on the diet for only 2 years.

Over the next two months, Brayden will be weaned off the ketogenic diet, changing it every two weeks until he is completely off.  And I am sure there will be changes to his medications (he is currently on Keppra, Phenobarb, Lamictal...others too but those are just his seizure meds).

Please pray for a smooth transition.  Pray that this will improve his bone health.  Pray that he starts to absorb all those good things bones need. Pray that his GI system will handle the transition as well, it typically has not liked change in the past.  Pray that we can still control his seizures.  Pray that he is comfortable, we are not sure what has been going on with him the past couple of months but he spends a lot of time being uncomfortable in his own body.

The doctors have been great about communicating thus far.  At Children's 2 neurologists, 1 endocrinologist, 1 orthopedic surgeon, 1 nutritionist (and some other doctors were involved but I forget and didn't pay much attention to them since they did not seem to be the decision makers) and Brayden's ortho dr. out of Fairfax...and of course Brayden's pediatrician who talks me through it, calming my nerves.

We have been communicating with them over email mostly and will continue to do so.  We will see Brayden's neurologist in January.  Then back to the bone health clinic in March.  And labs along the way (hopefully no x-rays till March because we don't want any new problems).
Posted by Jenkins at 7:48 PM

will be praying for Brayden as he transitions off the diet. Junior was on the keto diet 6 years and like with Brayden it made an absolutely amazing difference in his life. Even now about 5 years after being off the diet his seizures have not returned to the pre-diet level.

Praying for you all Carrie!
Love you,
Karen

We are also praying!!

love from the Netherlands,

Your blog has been such a blessing to me as a special needs momma. I will be praying for Brayden in the days and weeks ahead!