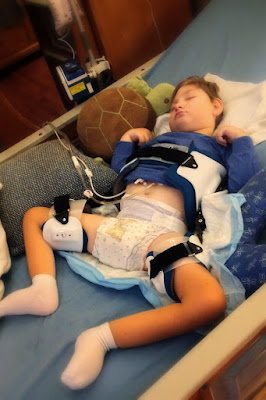 Brayden is back in his hip brace for bedtime.  He typically fights the process of getting strapped in (I mean, who wouldn't fight this contraption) but he settles down quickly and typically sleeps great for the night.  It is a task to get him in the brace, especially his legs.  In protest he will hold his legs up tight in the frog position so we have to take our time helping him stretch out.  And we know we cannot force his legs out ( past broken bones and all).

This night, I strapped him in.  I left the room for a bit to tend to the dog, who was demanding it was her dinner time, and then I did a little laundry.  I went back to Brayden's room to finish up the last of his bedtime medications and he was deep asleep...but I smelled something.

He needed a diaper change (we all needed his diaper changed because it can stink up the house, the keto diet and his medications must be the cause).

We joke that you don't poke a sleeping bear in our house.  The bear in this case is Brayden and bothering him when he is sleeping is never good...never.

So the question was, How can I change his diaper without taking the entire brace off and not wake him?  Or at the very least not cause him to have a screaming fit?  It looks possible but the leg braces are attached to the chest brace, all one big piece.

With no one home to help (boys at football), I went to work.  There was no way to change the diaper with him in the brace and I did try.  So I tried to just take out one leg...which lead to a bit of a mess and Brayden awake and mad.

Finally all was cleaned up and Brayden strapped back in and still mad.  Although he did calm down faster than I expected.

About 20 minutes later I hear Brayden coughing and then the vomiting noise was starting.  I dashed to his room.  We usually roll him to his side when he vomits or sit him up...neither was an option in the brace.  And I could not get him out of the brace quickly enough to help.  So it was rolling down the sides of his face to the back of his neck.  I turn on the oral suction machine to help.  Another clean up and he is back asleep.

This brace is supposed to help him, right?  What a pain.
Posted by Jenkins at 9:49 AM

How frustrating :( I remember seeing my sister run to manage vomits with her kids. Not pretty, not easy, and always a little scary. God bless you xx