Jeremy and I have been helping with our church's AWANA program.  A program for the kids.  In years past, Jeremy would take Carter and Luke in while he volunteered.  This year, Jeremy and I are both helping thus Brayden has gone to AWANA a few times.

Jeremy and I have been helping with the kindergarten age group (oh the crazy things those little kids say...stories I can only say in person and cannot put in writing here).  After Brayden was with me a couple of times, it all of sudden occurred to me that these were his peers.  He was actually in a room of his peers (a room of 50 excited and loud 5 year olds).

Brayden does not go to his Sunday school class.  He hangs with us during Sunday morning church service.  He has not been to AWANA or VBS or even any 'ol regular class with kids his age, since he was about two years old. 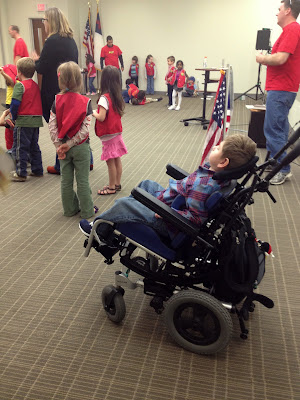 I had to process this picture.  Brayden in his wheelchair, developmentally still a baby but five years old sitting in a room filled with other five year old children, who were all talking, walking and having a great time.

I have had to remove myself from comparing him or thinking about what he would be doing for "normal" development.  I had to let that go a long time ago because it did nothing but hurt.  Today, it is almost to hard to imagine what he would be like as a "normal" five year old, not in a hurtful way, but in a way that Brayden is who he is and I cannot imagine him being anything else.

Well as for AWANA, Brayden is not quite a fan and not sure he will be a regular.  The kids are too loud, it is too late for him and he would rather be at home.  However one night, he made it through the entire program...even the rowdy game time.  He almost seemed to enjoy it.

The kindergarten kids have been very sweet to him.  One little girl stands about one foot from him and just stares with her heard tilted to the side.  She may come to get me if he gets upset but otherwise she just stands and stares, in a very sweet way.
Posted by Jenkins at 9:40 AM

We have struggles with this too. Emily is in a Sunday School class with her peers, but during the church service and during AWANA she is with younger kids. I struggle with this. I want her to be with her peers, but it has not really worked well so far. I am learning to accept the fact that she is going to hang with the young ones for a bit. And the comparison thing is really hard - definitely something I try to avoid at all costs!