Last night we went trick or treating. Carter and Luke were Batman and Robin. When we went costume shopping they

picked out a chicken costume for Brayden. Not sure why but they thought he would like it. When it came time to get ready last night, I just couldn’t torture Brayden with a costume. He had a rough day and I (with Jeremy’s persuasion) just put a sweater on him, no costume.

I was putting the chicken costume away and I started thinking…

Who is Chicken Little you ask? This comes from an old fable about a chicken that believes the sky is falling. She was sitting under a tree and an acorn fell on her head. Convinced that the sky is falling, she runs around telling everyone and tries to prepare for disaster.

The past two weeks have been rough. Brayden’s vomiting has not gotten any better, in fact it seems worse. Last Friday night he vomited blood (not the first time this has happened). The blood was fresh. I panicked, thus one of my Chicken Little moments. Jeremy was out with Carter and Luke in DC. I was home alone with Brayden. It was about 8:00 p.m. or so. Who do I call? Any random on-call doctor will immediately send us to the ER and I could do most of what they do in the ER, right here at home. Brayden’s GI doctor is out of the country so I called our pediatrician. I did not call the office or the on-call phone number. I called her personal cell phone. Who does that? Anyway, she answered, recognizing my number. She talked me through a game plan for feeding and medicines and of course, “If he vomits blood again, take him to the ER.” I sat with Brayden, held him while he slept and once in his crib, checked him every half hour. I was ready for the sky to fall and head to the ER. He did not vomit blood again…at least for one week.

Which leads us up to yesterday morning.
I check on Brayden first thing in the morning. Every morning he vomits, so my day starts with his bath. Yesterday he did not vomit. I let him sleep because of his long day at GU hospital the day before. About an hour later, I checked on him. I could smell the vomit before I could see it. I walked over to the crib…

The sky had fallen. Brayden vomited blood. Appropriately, it was Halloween morning and I had my own bloody horror. When he has vomited blood in the past it is about 1-2 tablespoons. A couple of times the bloody vomit put him in the hospital. This time, the spot on his bed was the size of a large dinner plate; it was big and he was covered in it. The amount of blood made me freak out. I could barely figure out what to do. I called the pediatrican. Same as before, “If he vomits blood again, take him to the ER.” I wait, he does not vomit blood. He still vomits but thankfully no blood.

Meanwhile the pediatrician makes some calls to several ENT (ear, nose, throat) doctors to help figure out where the blood is coming from. Brayden’s GI track has been scoped and nothing is ever seen. Now the thought is that the vomiting and some extreme crying caused some damage up in his throat area. This is 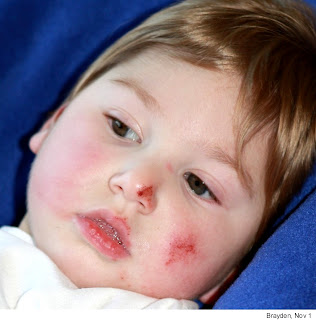 what happens to his skin on the outside, can you imagine what happens on the inside? His vomit landed on his crib bumper and sheets. His face was up against the bumper and he rubbed his face in the vomit causing the burns.

For now we are waiting to see an ENT doctor, hoping in the meantime the sky does not fall.

There are many times I feel like Chicken Little. I do not know when and what is happening, when to panic, or when the sky is actually falling. Thankfully Brayden’s pediatrician answers all of my calls (even on a Friday night) and helps me through those Chicken Little moments.
Posted by Jenkins at 4:31 PM

I just want to give you a hug right now...I want to kiss Brayden's sweet cheeks...I want answers for you...and healing for him...I admire your strength Carrie. You inspire me and have put so many things in perspective me.

It may feel like the sky is falling but you are no chicken little, few people in the fable believed chicken little but you handle it all (major rough stuff) with dignity and grace.

You are so far from Chicken Little! You are one amazing Mommy to that sweet little boy, and I so admire you. Every time I read your blog I cry... Sorry I didn't see this before I talked to you on Sunday. I pray answers will be had soon!