Mother at the Swings

We went to the Clemyhontri Park in McLean, VA. again. If you remember, our last experience there was interesting (click here for the story and here for pictures). This time Brayden made it to the swings. This swing is one of many swings there for handicap children. It seemed to offer him just the right amount of support. He seemed to really like it and he even fussed at me when I put him back into his KidKart. 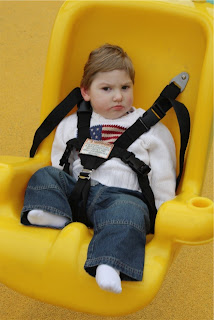 Uploading this picture, I remembered an article that I stumbled upon. I appreciate this women's feelings and conversations that she was willing to have. Conversations that I dodge because I do not know how to answer some questions.
The Mother at the Swings
by Vicki Forman
It's a Sunday afternoon. My nine-year-old daughter Josie is at home drawing cartoons with my husband and I'm swinging my six-year-old son Evan at the park. Evan laughs and giggles and with each wide arc of the swing, his smile grows ever larger. The mother next to me smiles herself and says, "Boy, he really loves that, doesn't he? I mean, kids just love to swing, don't they?"
Yes, I think, kids do love to swing. But the reason my son loves to swing isn't the same reason her daughter, in the swing next to us, loves to swing. My son loves to swing because he is blind and non-verbal, because he has what is termed "sensory integration dysfunction" and requires enhanced "vestibular input." Swinging gives my son the kind of stimulation other kids, those who can see and talk and run and ride a bike, get by simply being and doing.
And, yes, he also loves to swing because all children love to swing.
I smile back at this mother and I swing Evan higher and he laughs louder, his squeals of delight growing bigger with every push.
"He really loves to go high," the mother at the swings says. "He's not afraid at all."
"He's not afraid because he can't see," I say. "He has no idea how high he's swinging."
"Well, he must have other ways of knowing," she says. "Because he definitely loves it."
My son was born at twenty-three weeks gestation, weighing only a pound. His twin sister died four days after birth when we removed her from life support. Evan was hospitalized for six months and came home blind, with feeding difficulties, chronic lung disease and global developmental delays. Soon after that, he developed a serious seizure disorder and was on medication until his fourth birthday. He did not walk until he was five, still does not eat anything other than pureed baby food and formula from a cup, and has only a word or two -- variations on "muh muh" -- which he uses indiscriminately for "more" or "mama" or "open." I have watched my friends' newborns become toddlers and school-age children who can walk and laugh and talk and read, all while my son continues to function at the level of a two-year-old.
And yes, he has a beautiful laugh and a beautiful smile which grow only louder and wider on the swings.
When Evan was still in the hospital, a social worker gave us a handout, a road map for the potential reactions of friends and family members to our new status as parents of a super preemie. Potential support people came divided, according to the handouts, into the following categories: the rocks, the wanna-be-theres, and the gingerbread men. It warned us that people we might think were "rocks" could unexpectedly turn out to be "gingerbread men." Just like the story, they run, run as fast as they can from you when they hear of your baby's birth.
I quickly found that the guide was right, that I was supported by only one or two rocks, and that the rest of my friends and family members had become gingerbread men. As Evan's disabilities became more obvious, after he left the hospital and in the time that followed, I found new rocks and said goodbye to the gingerbread men. And I found a new category for the characters in the social worker's handout: the mother at the swings.
The mother at the swings wants to know. It's why she makes her observations, and why she pretends there is nothing different, nothing dissimilar about her child and mine. All kids love to swing. The mother at the swings would like for me to tell her what it's like, how my son is different, and how he is the same. She wants to know about the cane he uses, and the challenges of having a non-verbal child, and how I manage to understand my son and communicate. She'd like to ask, What does his future look like? And How are you with all this?
She wants to know but she doesn't know how to ask. And so she tells me that all kids love to swing.
~
It has taken me years to know what to say to the mother at the swings, and how to say it. To reveal the truth, graciously. To let her in and help her understand. To tell her that yes, all children love to swing, and my son loves to swing and the reasons are both the same and different. That it's hard to watch her daughter, with her indelible eye contact and winning smile, and not mourn for what my son can't do. That some days my grief over my son is stronger than my love.It has taken me even longer to appreciate the mother at the swings, to know that she and I have more in common than I once thought. To know that her curiosity is a mother's curiosity, one borne out of love and tenderness and a desire to understand a child, my son, one who happens to be different. That she will listen and sympathize when I offer my observations. That her compassion and thoughtfulness mean she will take the knowledge I share and use it to understand other mothers like myself, some of whom could be her neighbor, her cousin, her sister, her friend. And, finally, that she wants to know so that she can teach her own child, who also loves to swing, how to embrace and treasure what makes us all different. And the same.
Posted by Jenkins at 4:10 PM

Thank you for the nod. I am thinking of you and your little one.

Truly truly humbling. She puts it all in perspective...especially as we go about the busyness of our day not really appreciating all that we have...how many times have I taken for granted that I put my kids in a swing...never realizing how incredibly different that experience is for special needs kids. I am so glad that Brayden can experience that pure joy...and that he fusses when he wants out!