Quite the Poopy Summer

As Carter declared (in frustration as he huffed his way up the stairs), "This better be my worst summer ever."

I could not agree more.  At some point the level of which our stress and chaos has reached is utterly ridiculous and at times laughable.

Case in point, our temporary housing was without air conditioning up until a couple of weeks ago.  It has been one hot house.  We have had a parade of mice, ants and spiders, so now the house is like one big trap for any small thing.  Then on Monday we discovered the refrigerator/freezer was not working.  And we did not notice until very late in the day, probably stopped working on Sunday.  Thus we lost all the food (that we finally started to replace/stock from losing it all in our fire) in the refrigerator and freezer.  Borrow coolers and bought some dry ice, we at least needed something for Brayden's stuff.

Seriously, that just has to be ridiculous.  We keep telling ourselves that at least this house has plenty of room for our crew and it is still in Waterford. 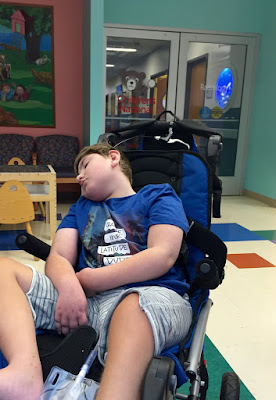 On Monday, Jeremy and I trekked to Children's in DC for Brayden's Barium Enema.  Fun, I know.  Thankfully the techs and radiologist were amazing.  Even let us play music from our phone to help relax Brayden.  Brayden's was given the barium enema; I can't even begin to explain how big that bag of barium was going in to him, yowsa.  The tech was worried that putting the tube into his rectum was going to upset him, we assured her that for better or worse Brayden is quite used to the enema action. 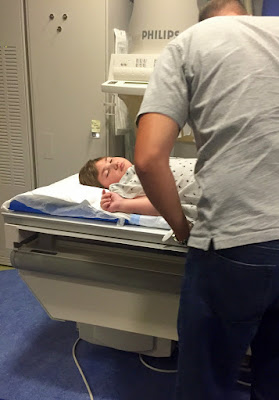 The radiologist was quick and efficient, taking many x-rays as the barium enema made its way through Brayden lower system. He even took the time to fully explain his findings. As he said, "I have good news and bad news.  The good news, his anatomy looks perfect.  The bad news, this gives you no answers to his motility problem."  The tube was lowered from Brayden's rectum and it flushed him out...in a way that I imagine colonics to be (and a confirmation as to why I will never have colonics).  The tube was completely removed and we were ready to head out.

One test down and a few more to go.  The other tests are more complicated and we are still working out all of the details.  But the plan is to move ahead with the testing over the next few weeks.

Meanwhile we are still struggling with Brayden having regular bowel movements.  He just has absolutely no control over it anymore.  Just moving him and little tiny squirts (yes I typed squirts) of watery poop roll out.  That can happen when he sneezes or coughs as well.  However it is just not enough to consider a real, productive bowel movement.  This morning, I was changing Brayden, moved out his diaper and here comes the squirt on to his bed.  Time to change the linens.  I clean him up and move him to a spare bed in the adjacent room.  I feel something drip on my foot.  A little squirt was running down my pants and dripped on my foot.  Then I look around.  His squirts of watery poop happened as I was moving him.  Literally sprayed his bed, the floor, some equipment, his wheelchair, a rug and me.  It covered over 30 feet.

Quite the poopy summer.

One summer I cannot wait to be over.  I cannot even begin to explain all that is going on so for now, we talk poop.

And the refrigerator was fixed.  And Brayden's room is very clean now.
Posted by Jenkins at 12:21 PM