Benefits that come with Brayden

Like Handicap parking, small thing for having Brayden in the car.

But sometimes there are greater benefits, without even knowing what is happening.
Take this past weekend for example.  We headed to Baltimore to visit my brother and sister-in-law for an Orioles game. 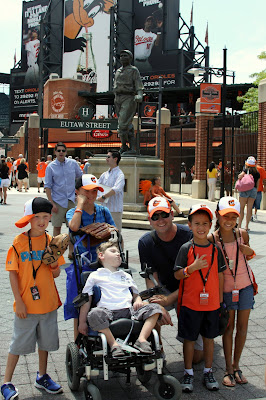 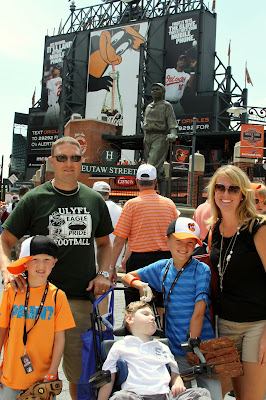 My brother arranged for the tickets in the main section.  Good seats and a great place to park Brayden.  It did end up being a bit hot but Brayden was covered (too many times that he was looking pasty) with sunscreen, had his fan and an umbrella. As the afternoon went on, our seats were in the shade. 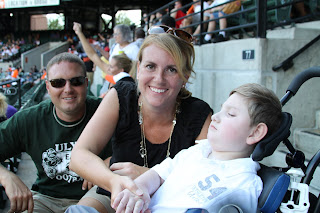 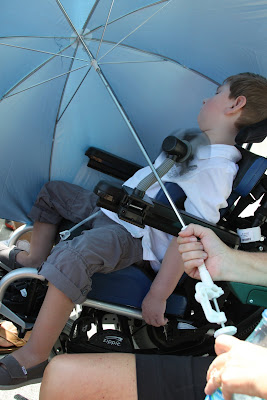 Brayden enjoyed being outside and having all of the family around him.  Although he screamed on the way to Baltimore, feel asleep, and cried for too long when we unloaded him from the car but he finally settled down.  I did worry that he may not be cut out for a baseball game, which could have made a disastrous family outing. 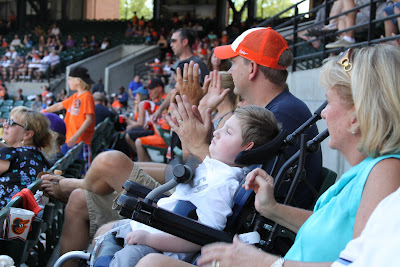 We had planned to stay after game because it was a night the children could run the bases.  I inquired about wheeling Brayden around the bases.  Close to the end of the game we headed to the location for children waiting to run the bases.  The line was long and seemed to wrap around the outside of the stadium.  We were told to find an Orioles attendant that could help us with Brayden.  After going through a sea of people, we were told to head to a little room with a desk.  This desk was for the family and friends of the baseball players.  Everyone was getting passes to head down to the locker room area/family waiting area. 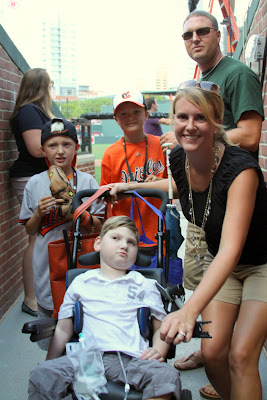 An attendant was there waiting for us and told us to the follow.  We loaded an elevator, down we went and into the halls of the baseball stadium.  Parts of the stadium that looked too official for us to be there.  We passed the press room, locker room and family waiting room.  Apparently we passed some players too (I had no idea who they were because they were not in their uniform).  The Orioles attendant opened the door and we were right behind home plate.  We waited there briefly and then they called us onto the field.  Carter and Luke (cousins too) were the first to run the bases.  Brayden wheels were not allowed in the finely manicured field so he watched from the side.

We finished running the bases and watched some players come out to the field with their friends and family and then we were ushered off the field (I did try to get pictures but there was not enough time).

Oh the life of Brayden. 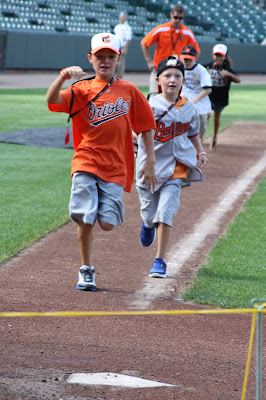 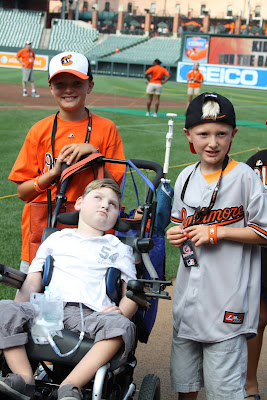 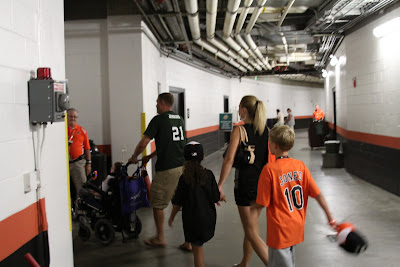