An afternoon of chaos

A Friday.  Just Brayden and I.  The nurse worked different days this week so she was not there on Friday.  Carter and Luke were at school.  Brayden and I were headed out to run a few errands.  First stop to get a haircut (pictures later).  Then the bank and dry cleaners.

Brayden started screaming in the car.  A peculiar cry for him.  I noticed his arms and legs jerking.  I watched it while in the bank drive through, then to the dry cleaner parking lot.  I pulled him out of the car and could feel it...he was having a seizure.  A seizure that is not his typical daily seizure.  This seizure looked much worse than something I have seen in a while.  His arms were banging above his head.  His legs jerking (which does happen sometimes).  And this scream/cry.  In between the jerking and banging, he was screaming.  A scream like he was trapped.  As if he knew he was stuck in a seizure and could not get out...it was an awful noise.

Still screaming and seizing.  I call Jeremy.  Luke has a presentation in about 30 minutes in front of his class and the parents...and I had his props with me in the car.  I realize that I need to call 911 for Brayden, seizure still going.  Jeremy starts driving towards Waterford for Luke's presentation.

A mile from home, I get a call from the school.  Carter is sick with a fever in the nurse's office and I need to pick him up.  I told them I would be there shortly, however Brayden is still seizing and not getting better.  I call the school back and actually asked (not mother-of-the-year moment), "How sick is he?  Is he just tired?  Do I really need to come get him?"  I decide to drive straight to the school; run in, drop of Luke's props, tell him daddy was coming, grab Carter (my car parked in the fire lane, Brayden in the car seizing) and head home. 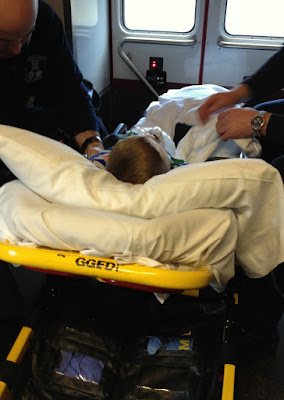 Finally arrive home, take Brayden to his bed and he is still seizing.  I call 911.  The crew arrives and then the medic...I do not know a single one of them (usually we know at least a couple of them).  I feel like I need to keep explaining things.  Brayden came out of the seizure before he was loaded into the ambulance.  But he was very deep into the postictal state and absolutely unresponsive...even to painful stimulus - no response.

I know the Diastat knocks him out a bit but this seizure really took it out of him.  The seizure lasted at least 2 hours.

We drive to the ER.  The doctor and the two nurses were people that have helped Brayden several times in the past...which makes it all much easier.  After a little discussion, we all decide to just watch Brayden, make sure he comes out of this postictal state and does not go back into the seizure (no IVs or tests, thank you).  Meanwhile, the ER doctor will check in with Brayden's neurologist at Childrens.  The ER doctor talks to the neuro then passes the phone to me.  We all agree that Brayden is fine to go home.  No changes to his medications unless another prolonged seizure happens in the next couple of weeks. 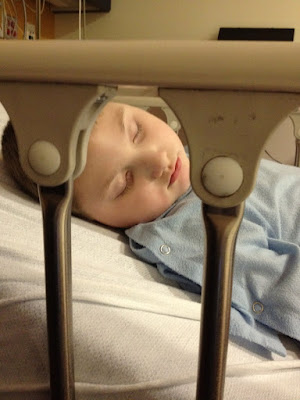 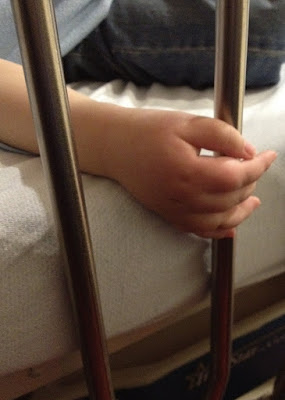 The ironic thing - on Thursday we were downtown at Children's for the ketogenic clinic (will blog about all of that appointment later).  We talked with the nutritionist and neurologist.  I said, "Brayden has not had a prolonged seizure for a long time.  We have not have to call for an ambulance in several months...a record for him."  All considered his medications and diet was doing great and we could wean off one of his medications.

A little time in the ER and Brayden starts waking up.  By the time we arrive home, Brayden was all smiles as if the seizure never happened.
Posted by Jenkins at 3:56 PM

so scary, oh how we hate seizures. Glad he is okay and back home.

I am so sorry to hear about this crazy day. SO stressful! Happy to hear that Brayden is home and doing well. He looks adorable in those pictures. I could just kiss that chubby little hand!

wow...that's some serious multi-tasking! you did awesome!!!

WOW! What a day!! Sounds like you handled it all with such grace and a clear mind! Great job Momma! Hope your days have been boring since then! Hugs!