Just the hotel was an adventure

Brayden and I...a Myrtle Beach hotel room just to ourselves.  Jeremy traveling for work.  Carter and Luke with their cousins, papa and great-grandpa elsewhere in Myrtle Beach.

Sounds relaxing and for the most part it was...

Except one night Brayden and I were leaving to meet the family for dinner and a massive storm was coming through.  Power in the hotel was going on and off...no way was I getting on an elevator to be stuck.  So we waited it out.

Loading Brayden and his wheelchair in and out of the car was a task in all of this nasty weather.  Thankfully the valet guys at our hotel were a huge help.  They even comp'ed the valet parking, which meant I did not have to pay for them to park my car, not even once at the hotel and they pulled it around under the covering for us to load.

And there was more fun.

The hotel fire alarm went off a few times.  The first morning an announcement said the problem was identified and everything was fine.  The next morning the fire alarm went off pretty early, followed by the same announcement.  An hour later, the fire alarm went off with an announcement to evacuate the hotel. Umm...the elevators get shut down (obviously).  So to the stairs Brayden and I go, I did grab a few of Brayden's essentials in case this was the real deal.  I have to carry him, with his big cast, down a few flights of stairs.  Now I understand why they put accessible rooms on the bottom floors.  And wouldn't you know it, by the time we make it outside, everyone was allowed back in...at least I got a little work out.

For most of our vacations, we have rented a house on the beach.  We have not really stayed at a big beach hotel except in Myrtle Beach.  Pool chairs and a spot on the beach are HOT items.  People wake up at pre-dawn hours to "save" their spots.  Which made it impossible for Brayden and I to find a place to sit, since I could not get down there to save chairs.  One morning, I wandered and wandered...not a place to be found. So I "borrowed" a spot.  A large family group saved several tables and tons of lounge chairs at the pool...and most of them were at the beach never to even use their pool spots.  Another day I was unable to find a place to sit.  A woman told me about another pool across the property that usually had chairs.  The pool was a part of the timeshares not the hotel.  The valet guys and the concierge tried to find Brayden and I bracelets to use that pool.  In the meantime, the concierge set Brayden and I up with the posh chairs, the ones available for rent (except he did not charge us).

And let me tell you, Brayden could get used to this kind of pampering.  The lounge chairs, came with cold bottles of water and full service. 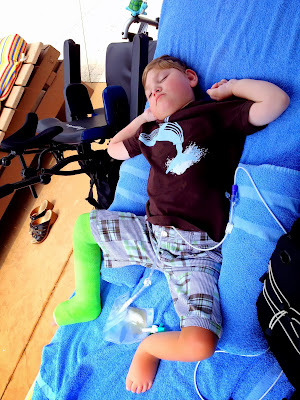 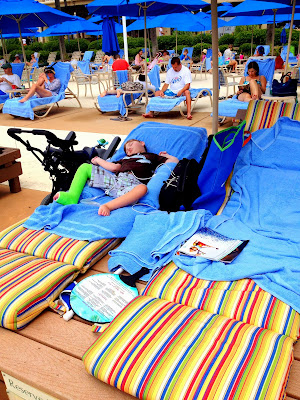 Those lounge chairs only last for a short time, another storm came rolling in.  Brayden and I quickly relocated to the hotel lobby, where the concierge gave Brayden and I some complementary t-shirts.  Made it back to our room and found a message that the valet guys got bracelets for us to use the timeshare pool.

Either I was looking incredibly pitful and like I needed some serious help or this hotel had incredibly kind and thoughtful staff.