I worry about Carter and Luke.  I know that they handle things pretty well but they are just little boys whose lives can be chaotic because of Brayden.  They do love him and do their best to understand our circumstances.  The past few weeks have been stressful, to say the least.  Luke had a presentation that I missed,  Carter had my father into school for a presentation, the spring break trip to the beach was canceled, then back-up plans for amusement park and movies were canceled.  Jeremy and I barely saw them for two weeks; an hour here, an hour there.  I was feeling incredibly guilty that they were being disappointed with one thing after another. 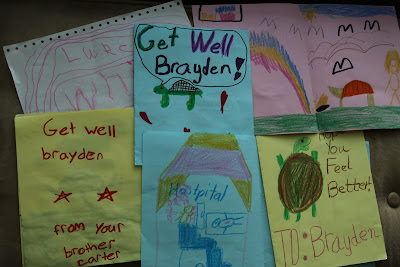 Being concerned, I emailed Carter and Luke's teachers to let them know that we were at the hospital with their little brother.  I did not want work and/or any correspondence with school to fall through the cracks since the boys were with me one minute, neighbors, grandparents, etc.  The teachers are incredibly kind and I know watched out for the boys.  Carter mentioned to his class about his brother (most of the class knows Brayden).  Carter thought it would be a good idea for the class to make Brayden some cards.  He stood before the class describing what would work best for Brayden...he told them that Brayden likes turtles and bright colors; he picked pink, yellow and blue paper since Brayden seems to see those colors better than others.  Carter proudly pulled them out of his backpack for us to take to the hospital with a promise that Carter would read all of them to Brayden once he came home.
Luke then decided he needed to make some cards and then helped me gather toys to take to the hospital for Brayden.

Both boys wanted to come to the hospital to see Brayden.  Luke said he would sit in bed with him and read him books.  They did come visit one night and both were disappointed to leave.  They enjoy the cafeteria, video games and playroom.  After a while they just wanted everyone home.

Luke had a meltdown one afternoon.  Sobbing and clinging to me...he was tired from being at other's homes, had not eaten well and just was out of sorts.  He wanted everyone home.  I tucked him in blankets on the couch and he dozed off for a bit.

Thankfully, we have amazing friends and neighbors who treat our boys like stars.  All who came to the rescue with yummy treats, gift bags, even sleep-overs with a trip to Dave and Busters for some out of control fun (I owe you for that one).  The boys had time with their grandparents, whom they convinced they could have lots of junk food.

Carter prays for Brayden, "to get better and be able to be more like us."
Luke prays, "Help Brayden not be sick anymore and feel more better."  Luke has been saying this prayer, the exact same words, for at least two years almost every night.

We talk about things the best we can, answer any their questions and try not to appear stressed...
Posted by Jenkins at 9:57 AM

Those boys are amazing. They are going to be wonderful people. I see them doing big things for children like Brayden when they are older.

God is already using this to make them who He wants them to be. Different circumstances..different kids...but I worry similar things for my kids as we are about to add 2 more...but I trust HE will use it - even the hurt and disappoinments - for HIS glory. Not easy...not for our mother's hearts...but I have to trust it.

You and your husband do an amazing job. Be kind to yourselves, you have such a huge load to manage. You are only human and can only do so much, but you serve a powerful and loving God. I pray that His hand shelters you and His spirit brings you rest and restoration - for the whole family. xx