The list of Brayden’s aliments and medications is long. I have all of them memorized. I regurgitate the information a couple times a week to doctors, insurance companies, on medical forms, etc. In emergency I have to pass on the information to the EMTs, ER nurses and doctors, admitting physicians, floor nurses, head nurses, medical students, on call doctors, residents, attending physician…the list goes on and on.

After our last hospital stay, I created a card that contained Brayden’s information. All of it is there, spelled correctly, proper diagnoses, medicines and doses written, ready for anyone to read. Then I could concentrate on Brayden, comforting him. It looks something like this: 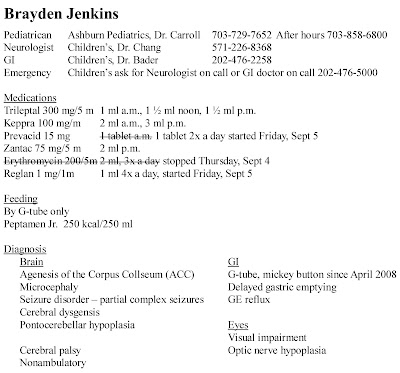 On Sunday, we were in the ER at Children’s and in the process of being admitted. We handed the card to the doctors who were seemingly impressed that we had everything right there ready for them to read. We waited and waited in the ER for Brayden to be transferred to his room. The admitting physician came in to get Brayden’s medical history. He asked a few simple questions about Brayden’s development, I did not hand him the card. Then he asked the big question; “What is his diagnosis?” I never really know how to answer that question. Brayden has so many things and no real label that would describe him. I pulled out the information card I created. The doctor started reviewing it, asking a few questions about his medications. Then he reached the part listing the brain abnormalities. He read each word. Then tried to make a joke and said, “I used to work with a doctor that said this and I am going to say it now. BAD BRAIN. He has a bad brain.” He chuckled. Jeremy and I were a bit shell shocked that he said it. We know that Brayden has a bad brain but have never had someone say it with such little tact.

I am looking at Brayden's photo on your sidebar...such a sweet boy.

I'll pray for that doctor to realize what a dumb remark to make, I just want to say not bad brain, because God doesn't make bad brains, he is a our miracle.

I can't believe he labeled it bad brain!!! OUCH!

Is the trileptal controlling the seizures? I was on that ( I have epilepsy) and it didn't help me much, but I've been on zonegran for a while, and its done wonders!

(From the Mom Blogs!)

I seriously want to scream. I cannot believe he said that. I know these docs see alot, and get desensitized, but that sweet child is just that, a sweet child of God. GRRRRR!