Brayden has been admitted for his electrolyte problems.  Friday he had labs and they did not look good.  Monday (yesterday), the labs looked a worse.  It was decided Brayden needed to head to Children's hospital. 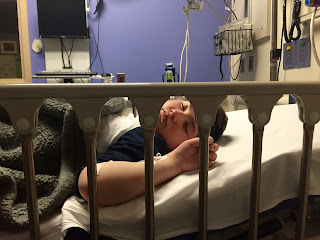 Several different doctors have come by since being admitted, not sure what specialty should take the lead. 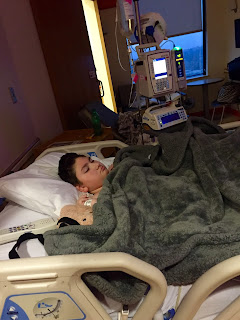 Morning rounds and morning labs have been done.  Brayden's labs this morning did not show much improvement and some looked worse, despite the IV fluids given.  The biggest problems seem to be his Sodium, Potassium and BiCarb.  From what I could assess during the team rounds, they are assuming that (in layman's terms) Brayden's body has not recalibrated since the ileostomy surgery, so he ins (food, water, etc.) are not matching up with his outs (stool in his ostomy and his stomach drain).  As to why this is happening and how to correct it remains the big question.  The Hospitalist and team is consulting GI and Neuro as well.

He is being given IV fluids and supplements via IV, more labs done this evening.  Given his food via his j-tube.  And it is all just a waiting game.  This is not an acute problem, seemingly ongoing for Brayden so they do not want to discharge him without some longer term plan to keep his electrolytes in the right place.