Lots of Questions in the Hospital

We have seen and talked to so many people in the past 24 hours.  Brayden's electrolytes were going down and getting in to the danger zone (some numbers were already there, thus being put in the hospital).  His electrolyte numbers are working their way in to the correct place.

I thought, naively, that a lot of Brayden's problems over the past year with his electrolytes, motility, weight, etc. would be resolved as a result of the ileostomy surgery.  Yes, Brayden's stool is coming out the ileostomy so we do have poop.  But what is going on with everything else?

Hospitalist - the guy leading the team and oh so many doctors.  Going over and over Brayden's past medical history, specifically Brayden's last few hospital stays and Brayden's current troubles.  The hospitalist and the team are trying to put together the seemingly random pieces of Brayden's puzzle.

GI Team - This electrolyte game seems to be all about Brayden's ins and outs.  The food, supplements, water, etc. going in to him.  And the ileostomy output, as well as his gastric drain output.  Every bit of it counted.  Brayden's food and water amounts do not seem to be working.  Does he need more calories? Higher concentration of food?  Not tolerating water?  Does he need supplements?  Brayden's ileostomy does not have much output but does more need to come out?  What amount should be coming out? 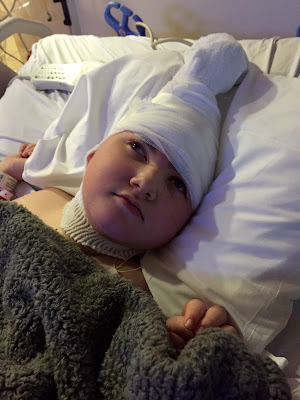 Neurology Team - related to Brayden's electrolyte problems or not, we have noticed for about 2 weeks (at home and at the hospital), Brayden has these retching episodes.  Yes he retches all the time, which are always quite dramatic.  But the past two weeks his retching is followed with apnea episodes.  He finishes retching and then shortly after he turns blue, he turn blues all over, not just his lips.  His oxygen dips way down.  It lasts about 60 seconds.  And it happens 2-6 times a day.  The neurology team wants to see if it may be seizure related so Brayden is now hooked up to an EEG for 24 hours.  Videoed and we have to click and document the retching/apnea episodes.  Are these episodes a result of electrolyte problems? Or something else? 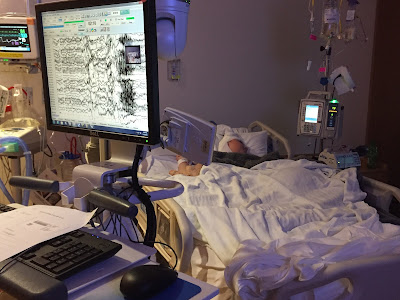 Lab Tech - come a couple of times a day to draw labs.  Which might be the worst part of the hospital, Brayden is such a hard stick and running out of places to get a good blood draw.  Everyone is constantly watching his electrolyte numbers.  His potassium, sodium, chloride and bicarb are the problems.  Numbers sort of heading the right direction.

Respiratory - Brayden's BiPAP and his apnea troubles.  Trying to get any sort of breathing mask on him with the EEG set up is proving to be quite a challenge.

Med Students - Yes Children's is a teaching hospital.  We found out that, currently, Brayden is the most involved child on the floor.  Which provides lots of discussion, teaching, learning during rounds and room visits, especially since Brayden does not have a diagnosis and so many things going on.  I do say, and will continue to say, that I like being in a teaching hospital.  I appreciate the thorough discussions.  Being a part of the rounds and discussions help me learn so much and understand the doctors' thought process.


The plan thus far, Brayden has been on IV fluids (that include sodium and potassium supplements) and his normal food via j-tube, trying to normalize his electrolytes.  Then Brayden should start his food via j-tube with some supplements in the food(that we are not quite sure what is in the mixture yet) and taken off the IV fluids.  He will be monitored while on this food mixture to see how his body responds.  Clearly his electrolyte troubles are not an acute problem.  Even if his numbers get to the correct place, will they stay there?  How can we keep them in the correct range?

Brayden will be in the hospital at least till Friday night or the weekend.  He is being monitored in every way.  Brayden does seem like he is feeling better.  As of yesterday afternoon, he has had more time being awake.  He is vocalizing more, expressing his dislikes and some happy noises. 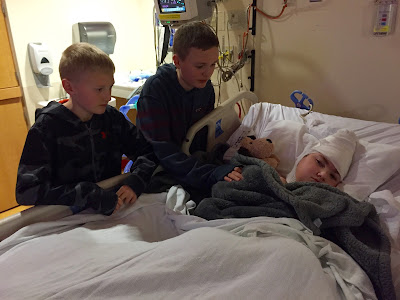 Jeremy brought Carter and Luke down for a visit.  Then I headed home so Jeremy stayed with Brayden at the hospital.

Please let me know if boys need rides or you need errands done etc. Im around.

We will lift up your family to the Lord. He knows what's going on. He will provide all the answers and He will be your rock. Hang I. There, Jenkins family. We are with you.

Jessie has been out of school, we had no idea. Give Brayden a hug from us. We're praying for you guys. Sorry honey.