Brayden had surgery yesterday.  The morning did not start so well and we were told Brayden's surgery would be pushed to another day.  His electrolytes were not so great and they were not able to clean him out all the way.  He was still a bit of a mess.

Many, many bowel movements and stuff was still inside.  I cannot believe how backed up he has been, how his little body could hold that much poop.

A couple of hours after morning rounds and they decided it was time for surgery.

Braydens body is not completely ready for the surgery but he needed the surgery.  He was taken down to pre-op.  We talked with the surgeon.  He was confident he could get the ileostomy placed however he was not sure he could remove the colon for several reasons.

Brayden was wheeled off and we waited.  We were told it would be about 2-3 hours.

The surgeon came out just over two hours later.  He was able to place the ileostomy.  However, he was not able to remove his colon, that was more than Brayden could handle at this time.  After the surgeon briefed us, then we waited and waited more to see Brayden.

It was determined Brayden
needed to be in the PICU (they discussed this prior to the surgery but not sure if he needed it or if there was room).  Brayden was taken to the PICU shortly after the surgery.

The afternoon and evening were about his breathing, pain management and seizure control.  He was put on BiPAP with some additional oxygen pumped through it.  He was shaking in pain and was given doses of pain medication every few hours or so.  And his seizure threshold seems low from the surgery., way too many seizures. 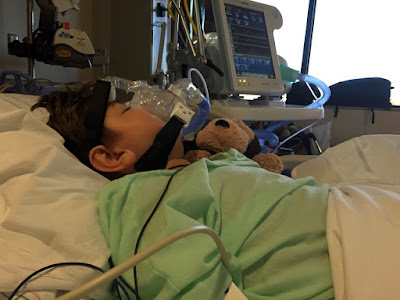 Then they are of course watching his ileostomy and the incisions the surgeon used to place it.

Brayden slept relatively well last night (of course he was a bit snowed with medications but sleep is sleep).  Jeremy and I didn't sleep much.  Jeremy braved the parent room to catch some sleep.  I attempted to close my eyes on and off at Brayden's bedside.  I forgot to mention that Brayden has roomies, the PICU is quite full and he is in a room with three other kiddos (one incredibly heartbreaking situation for a child in here, it is near impossible for me to sit here and not try to comfort her). 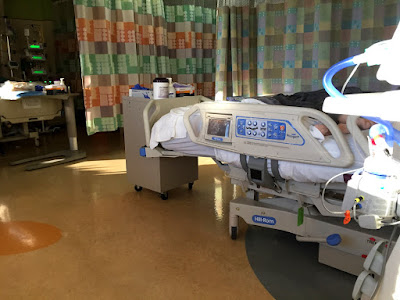 This morning started early for Brayden.  It started with  continual seizures for about 3 hours.  Finally all the medications settled in and he found some rest.  Then he was able to come off the BiPAP with oxygen. 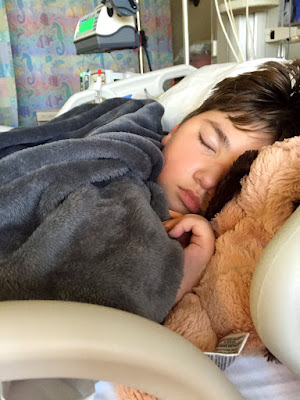 His ileostomy continues to look good, doing the right things so far.  The doctor team will watch it and decide when they will attempt feeding through his j-tube.  Once medications and food will be going through his j-tube (very tiny amounts at first) they will be watching closely to see how he absorbs things and how much comes out in to the ileostomy bag.  They may even attempt a little bit this weekend.

Brayden does not seem to be in much pain, until he move him around or mess with him but that is to be expected.  He continues to struggle with seizures and the doctors are actively working to control them.

If tonight goes well (and that is relative for Brayden), then Brayden could move out of the PICU to the general Med/Surg floor tomorrow afternoon/evening.  All things considered he is doing pretty well, actually better than I expected (my bar was set pretty low).

On a side note, I dropped my toothbrush on the communal bathroom floor here in the PICU...and I may have paused to actually consider recovering it...exhaustion is real, it clouds your judgment. I did snap back to reality and tossed it but was disturbed at how long I really considered keeping it.

Oh Carrie, we are praying and thank you for this update. Jeremy and you continue to be an amazing example of love and strength.

Hang in there, guys! Minute by minute, you've got this too.