Out of the PICU

Brayden has been moved to the general floor.  He is doing pretty well.  It is nice to be out of the shared PICU room.  The private room might be the best hospital view we have ever had; a panoramic view that includes the Capitol, Washington Monument and more. 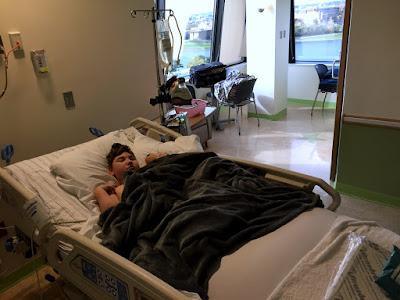 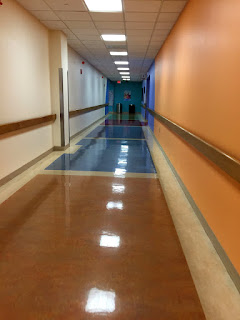 Of course Brayden still likes to keep everyone on their toes so he still struggled with seizures, almost 48 hours and still not breaking out of the seizures.  Pushing in to day 3 of seizures and he finally seemed done with the constant in and out of seizures and now we are only seeing his typical daily seizures.

To help with the seizures and test out his function of his GI system's ability to absorb, they gave some of his medications through his j-tube yesterday.

With the attempts to use his j-tube, it started up the activity for his ileostomy.  A bit too much "dumping" out yesterday and his electrolytes started to take a hit.  They ordered more blood work and an EKG.  They pumped him with some additional things to help with his electrolytes.  That helped him perk up and seem much more like himself.  Which was great since Jeremy brought Carter and Luke down for a visit.  And we had a family dinner with hospital cafeteria food (not the best choice on the weekend, slim pickins). 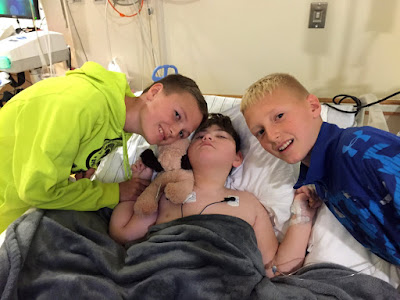 Brayden (and Jeremy) slept pretty well last night.  The doctors put orders in for Brayden to start his j-tube feedings.  Starting at 5mls/hour and slowly increasing. 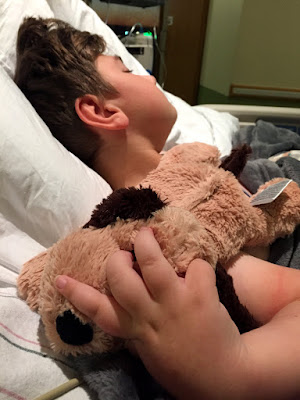 Today, Brayden has handled the j-tube feedings relatively well.  There was some "dumping" in to his ileostomy so they needed to replace those fluids with a big bolus of IV fluids.  The concern with dumping is losing to much fluid and being dehydrated (which causes problems for electrolytes, high heart rate, etc.), much like having severe diarrhea.

His ileostomy bag came loose and they needed to put a new one on.  Jeremy was able to see the process of the change and making it work for Brayden.  It is tedious and specific but we will get the hang of it.

Overall, Brayden is doing pretty well,  Today he seemed much more comfortable and showing signs of his personality.  And snuggling with his new little friend, puppy.  Oh how I love those chubby hands.
Posted by Jenkins at 4:52 PM

Hearing of progress is good. Glad to hear of your view... I hope the sunrises are beautiful for you and a reminder of how every morning God brings new strength and grace. Those chubby hands match the chubby feet at the top of the page, simply perfect. Praying for you, Elena

Love the little hands clutching the puppy:). Praying for you all - give Brayden a hug from us. Kim and Jay❤️