Just when I started to think I had to all together

then the longest day ever happens...

A weekend of a basketball tournament and Jeremy heads out of town.

Saturday was under control.  Carter had a couple of games (won one, lost one).  He did miss a couple of birthday parties but he was just as happy to play basketball.  Brayden was home with his help.  Luke tagged along with me and then headed out to his cousins birthday party.  Jeremy was able to help during the first basketball game but flew out of town before the second game (don't worry I face-timed him to see the game till his plane took off).  We were gone most of the day since the tournament location was about 40 minutes from home. 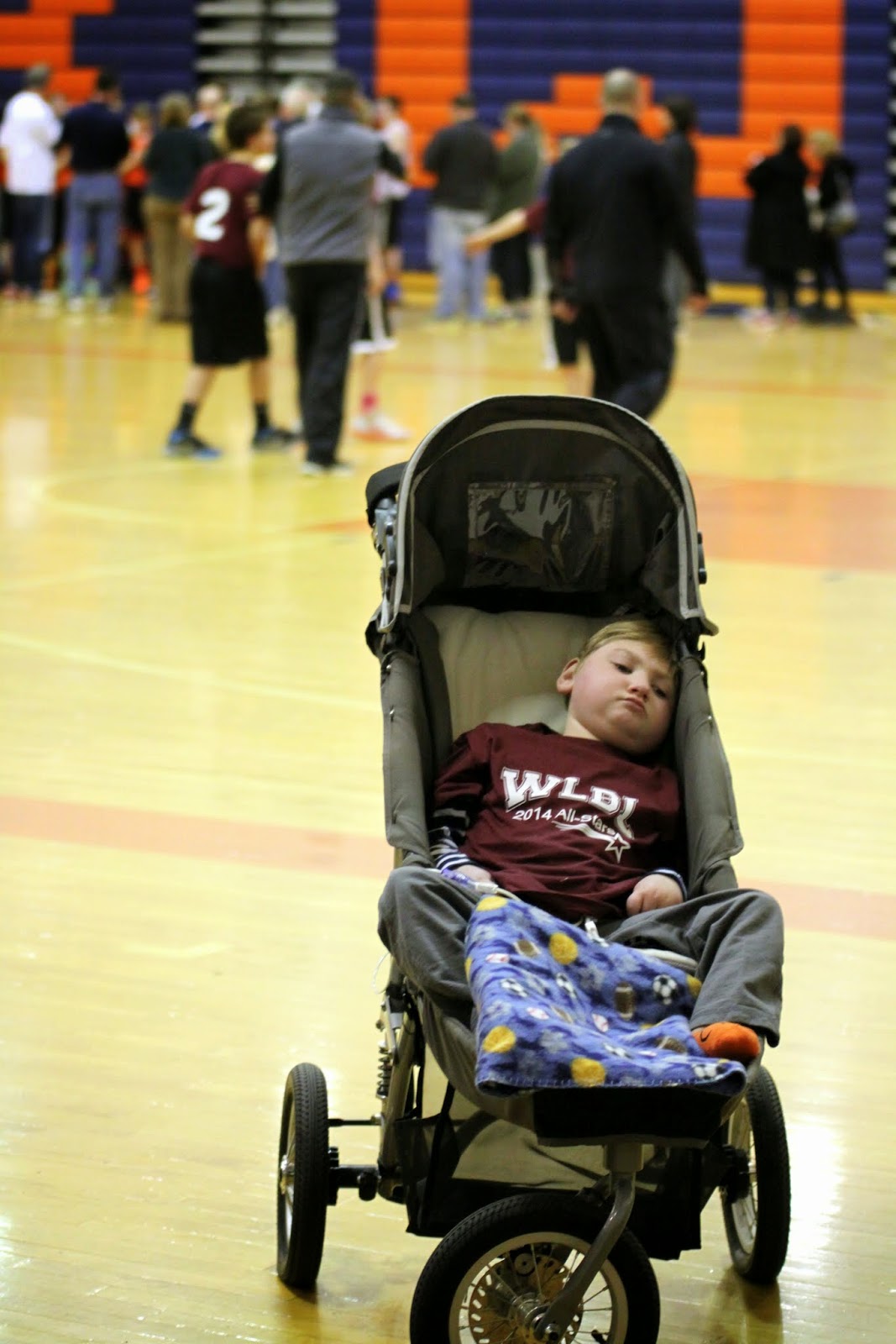 Then came Sunday.  I decided not to attempt church with just myself and the boys.  We left the house around 10:20 a.m. for the busy day.  I packed basketball gear, wrestling clothes, changes of clothes, food for Brayden, Carter and Luke.  Carter had his first basketball game, they won, so they played again in a couple of hours.  We head out to get some lunch before the second game, in the meantime I am trying to figure out how to get Luke to his wrestling awards banquet in a couple of hours...of course the opposite direction of home and the basketball tournament (did have arrangements for him but it got a little mixed up because of the basketball tournament).  Carter's team wins the second game of the day, so they play again in a couple of hours.  Carter goes with friends because I need to drive Luke into Sterling for his banquet.  Did I mention I have Brayden with me for all of these activities?!

I get Luke to his banquet just in time.  Then I did make a stop at the drive-through Starbucks.  And thank goodness I did because the real "fun" hadn't even started yet.  I thought I had everyone taken care of...Luke made it to his wrestling awards, Carter at his basketball and Brayden moderately content with me...and some where along the way everyone was fed something.

I make it back for Carter's game, which was supposed to start at 6:30 p.m.  It didn't start until sometime after 7:30 p.m. (I stopped looking at the clock because I just didn't want to know how late it was getting). 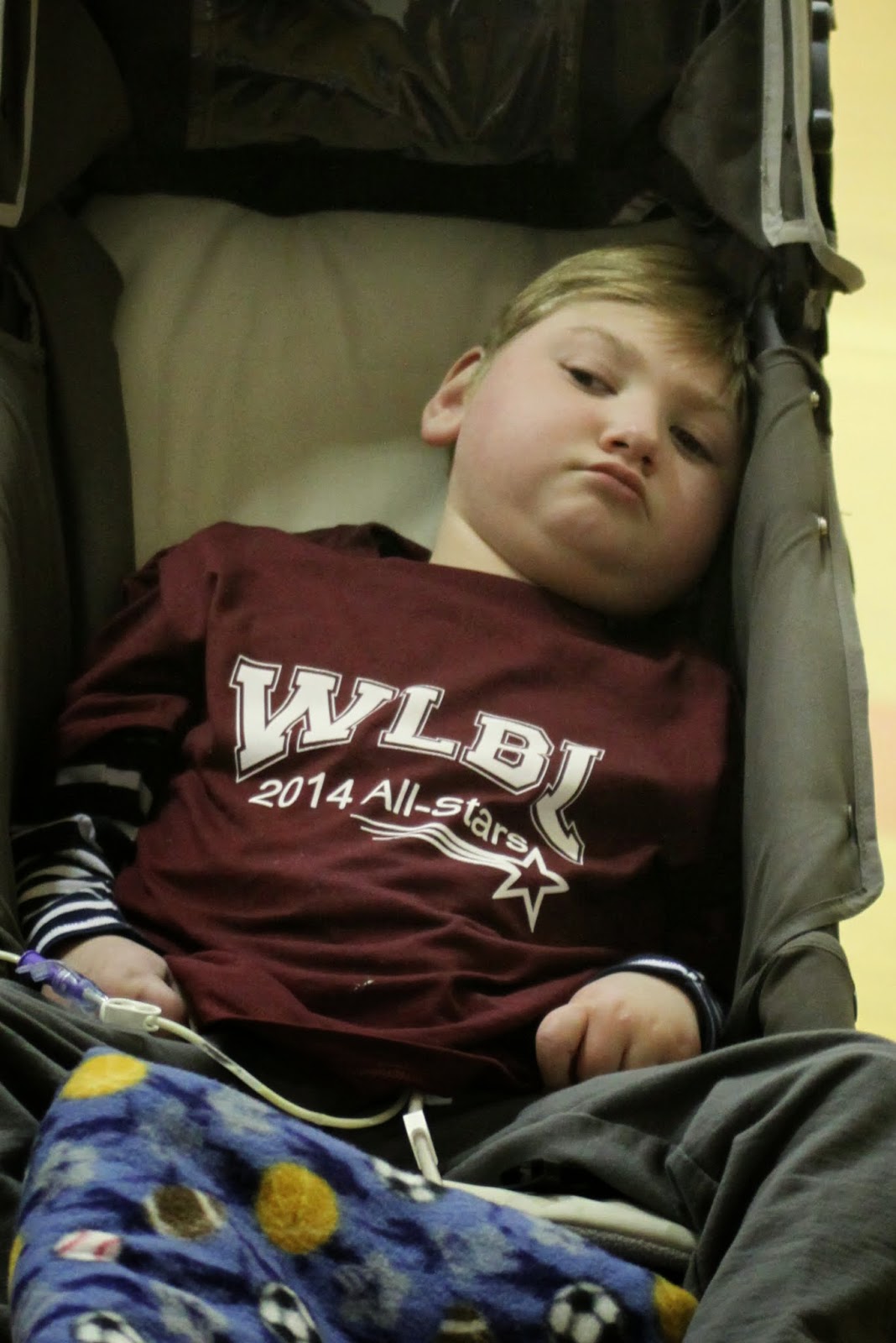 Now 7:00 p.m. is Brayden's bewitching hour.  It is his bedtime and medication time.  He was happy so I pushed it...thinking I had it all together (I really should have just taken Brayden home and Carter gotten a ride home with friends).  One of the buzzers/me yelling during the game set him off but he recovered.  Then I started to smell something, I couldn't change him at the car, like a prefer to do, because it was POURING down snow.  So  I dashed outside, while someone kept an eye of Brayden and gathered the necessary supplies to change him.  But the high school was pretty much shut down and I cannot change him in a bathroom so we went under/behind the gym's bleachers.  And it was a big clean up...and I did not have an extra pair of pants.  I finally cleaned him up (I was sweating a bit from trying to do it on the blanket on the floor) and he was content.

The championship game ended (Carter played barely a minute but was happy to just be on the All Star team).  I knew I was pushing Brayden too much.  It was already two hours past his bed and medication time and we were not getting home anytime soon.  I load him in the car, as he was screaming mad.  He screamed for awhile, which starts the gagging/vomiting but he finally passed out asleep.  I was worried about his medication because we have been seeing an increase in seizures at night time.  All I could think was to get him home and get his meds.  But I still needed to pick up Luke from friends who thankfully kept them at their house after his wrestling awards until I could come get him.

And at this point it is pouring down snow.  Snowing hard enough that it became hard to see the roads...not because the roads were covered, it was just snowing that hard.

We make it back home a little before 10:00 p.m..  And Carter and Luke have friends over to sleep since school was canceled the following day due to the snow.

I was busy working on Brayden while the boys were settling in, they were all ready to head to bed after the long day of basketball.  Then one of the boys comes to get me...Luke is throwing up all over the place.  I had to call the boys' mom to come get them while I helped Luke.

Poor Luke did make it to the bathroom but not the toilet.  He needed a shower but had to go to another bathroom for that while I did the clean up.  The shower curtain had to be taken down and the towels hanging on the wall.  The rug tossed.  Walls, doors, floor, toilet and bath tub cleaned.  He hit everything.

The boys left and Carter came to help me.  Finally got Luke to bed, finished up with Brayden and worked on the clean up.  Luke rushes to the bathroom again...thankfully made it this time.  Tuck him in again (while hearing an exhausted Carter murmur from his room if everything was alright).  About 12:45 a.m. my head hits the pillow.  And about ten minutes later Luke comes in to get me, he got sick in his bed.  I strip the bed, decide to only put him on towels and a sleeping bag to sleep (with the obligatory bucket and towels beside the bed).  I work on the clean up, again, and have NO idea what time I got to bed.

So thankful the following day was a snow day.  Luke was starting to feel better (got up one more time that night).  Carter spent the day at a friends house.  And Brayden was sitting by the fire...because he had another diaper situation and I needed to clean his bed as well.

Who wants to come do my laundry?!  I thought I had it under control until all of this.

And a side note. I made myself a late dinner that night but was busy helping with Luke.  I came down stairs to find the counter top empty...the dog ate it...which was kind of okay because I lost my appetite cleaning up Luke's bathroom.

Seriously, why does this happen when Jeremy's out of town?  Murphy's law kind of night.
Posted by Jenkins at 11:50 AM

Oh my goodness, that sounds absolutely awful. You poor thing - and poor Luke! I hope he is feeling better and that whatever it was didn't pass to anyone else in the family. Take care xx