From head to toe

Brayden had no idea that staying home from school was not going to be relaxing. 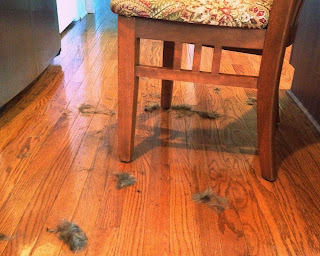 We started with a house call for Brayden's haircut.  Love that Micki came to rescue his hair, there was no way we could take him to her barber shop with that big cast.  He hair has been out of control.  With Thanksgiving and family pictures coming up, haircut had to happen, in a cast or not.

It was a lot of hair.

But Brayden's day did not stop there.  We had an appointment with the ketogenic clinic at Children's National.  Thankfully the neurologist and nutritionist prepared the lab requests ahead of time so we could arrive early to wait in the lab. 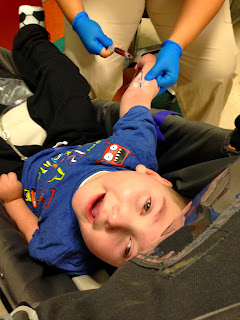 It was a lot of lab work...I think 14 tests?!  Oh and Brayden is such a hard stick, it feels like the blood cannot come fast enough.  During the lab work, my phone rang from a friend who was getting Carter and Luke from school.  I worried something came up so I answered the phone, with the bad reception in the belly of this hospital, all I could hear her say was "Are you okay?".  I had no clue what was going on but at the moment a Children's Hospital (in Wisconsin) was on lock down because of a shooting.  My friend just heard a shooting at Children's but she sent me a text to let me know what was happening but it was not in DC.  As I was trying to answer the phone, I snapped a photo of Brayden (the app open from trying to get pictures of his new haircut before we left the house but he would not cooperate), with a little cropping, you can see his desperate plea for help and crying to make it stop.

Oh how I wish he didn't have to go through this.  He hates it from the moment they pull up his sleeve.

After the lab, we headed down to neurology for the ketogenic clinic.  Lots to discuss.

Brayden's seizures have been more frequent.  And with the increase of seizures, he seems to be gagging at the end of each seizure and sometime during.  Thankfully his O2 seems fine.  But these seizures happen every time he wakes up, even if he just had a quick cat nap in the car.

So we wait for the lab results before adjusting his keto diet or medications changes.  We wait for the bone scan and appointment with the endocrinologist.

How does Brayden feel about all of this?
Still mad and still in protest of being poked and picked at all day...see his chubby little hands are still in a fist, his way to showing he is not pleased. 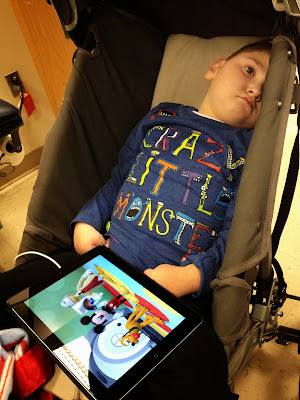