And he actually did well!  Not that I was thinking he wouldn't do well but...he does have a hard time with new unfamiliar people and places.  However when you are as spoiled as he was during the stay at Jill's House, there is not much fussing to be done. 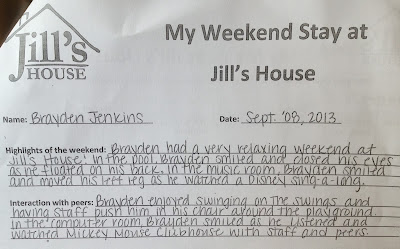 His fun:
The nurses handled all of his gear and requirements just perfectly (and no phone calls to me for questions).  The staff and volunteers were so wonderful and thoughtful.  Jill's House emailed us pictures of Brayden on the swing and in the pool during his stay.  They said he did have hard time with transitions, which is pretty much his norm on any day (but who really likes change anyway, especially when they take you out of the relaxing pool). 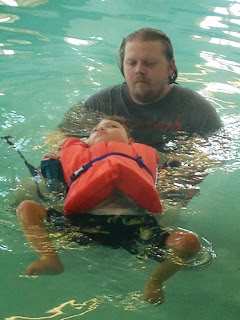 I went to pick Brayden up (Carter and Luke at basketball, Jeremy on his way to Alberta) and was so excited to see him.  This was the first time for him to be away from his family and I just wanted to get my hands on him.  They wheeled him out and I swear he looked bigger, more grown up.  And (kind of to my surprise) he was very content and comfortable.  As he heard my voice, his face became puzzled, trying to make sense of it all.

I loaded him in the car and we headed for home.

We pulled out of the parking lot and the tears finally came.  I was a bundled of nerves all weekend but no tears until that moment.

I have these moments where it is like I take a step back and realize that this is our life.  That I have a son like Brayden, that we are the people using Jill's House and we just left him for an entire weekend...what a big deal all of this is.  I was overwhelmed with finally seeing him, for what seemed like much longer than the weekend.  Overwhelmed that he actually did it.  Overwhelmed that he can go to Jill's House.  Overwhelmed with joy that he even has this opportunity.  I was so happy for him, so proud of him.

We are planning for future weekends, hopefully becoming a regular.

Now ask who was more of a mess this weekend Jeremy or I...

Carrie, I'm leaving a message just to say that I am so very, very happy that Brayden's weekend went well. I read your blog all the time even though I don't comment. I'm here, celebrating with you all of the big and small victories, and praying for your family and especially for you -- especially when you request prayers (but often even when you don't). Happy tears here, so glad the weekend went well.

What a lovely post. I'm so pleased to know it went well. I'm not surprised you felt overwhelmed by it all, but very happy know there is a fun, safe, perfectly resourced place for Brayden to go while you and the rest of the family can get some much needed respite. God bless xx