The day of his birth

Brayden is six years old today.  I cannot believe it.  I still call him my baby boy (in fact strangers still call him a baby when he is in his wheelchair...not sure how they think this long boy can still be a baby...).  He is spending his birthday at school (hopefully on good behavior). 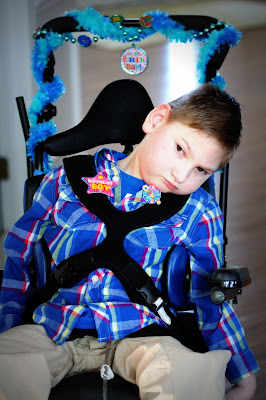 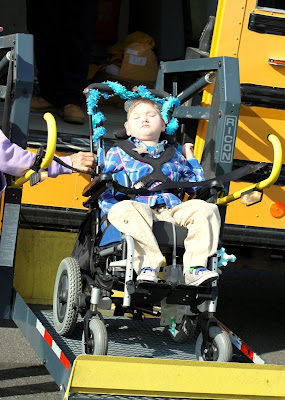 Yesterday for kindergarten registration I had to dig out his birth certificate, April 17, 2007.  I could not even bring myself to read over the words, I almost don't want to remember those days.  It was like lightening bolt flashbacks were coming to mind, images of his first few days.  I can go right to the moment after one of his first tests, when the radiologist told us his brain was abnormal and some parts may be missing...it wasn't so much what they were saying because I did not understand all the medical terms then, it was how they were saying it, that dreadful tone doctors get...we came back to our hospital room, I picked him up from the hospital bassinet and sat on the edge of the bed holding him as tight I as could, in complete disbelief that something could actually be wrong with my baby but I knew something was terribly wrong.  My heart races thinking about the fear and devastation we felt, that rocked us to our core.

His birthday is not about celebrating the day of his birth, I choose not to reflect much those dark first days (really first years).  It is really about celebrating we have made it six years.  Celebrating that he is healthier and happier than he has ever been.
And the boy is happy today...I tried to grab a few smiles this morning as he was leaving for school. 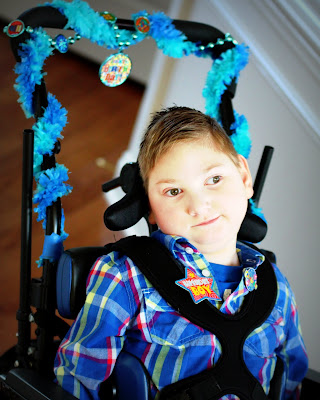 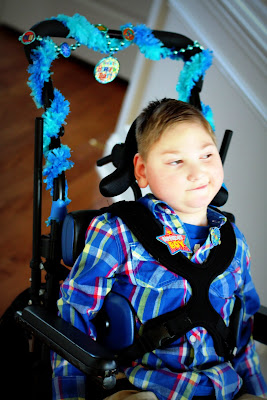 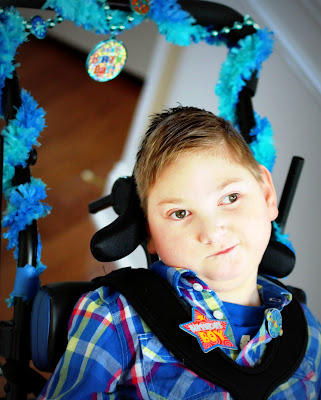 For most of his life I have not thought about his future, not in the way I think about Carter and Luke.  I did not want to think about Brayden's future...out of fear.  For the boys I would buy clothes at the end of the season (on mega sale) to put away for the following year.  For the first several years of Brayden's life, I rarely bought clothes to put away for the following year, maybe just a few things.  Some how I felt like if I tried plan even a little bit, it would not be.  So we have been all about being the moment with Brayden.

Did I think we would make it to six?  Sometimes yes, sometimes no.  The doctors scared us often and made his future seemed so dim and that no matter what his age, he would not be able to do much (one doctor was even shocked when Brayden moved his arms...I was shocked that the doctor was shocked).  We did not know what life would be like with a severely disabled child that could not talk, walk or even eat.  Who imagines that for their family?  We could barely function in the moment so thinking ahead to potential birthdays or milestones seemed impossible.

Wow, he is six years old!  This little boy has changed our life in so many profound ways over his six years.       We cared for him, prayed over him, cried over him, held him, rejoiced for him for six years.  Oh how deep this love is.  We thank God for such a precious gift and having us be his parents.
Posted by Jenkins at 10:17 AM

I have been so blessed by this blog. It has been wonderful to follow Brayden's adventures and she how he is thriving. He really has grown and looks so mature! I love the smile pics - especially the first one that looks like he is lifting one side of his mouth. It makes him look like he is up to something. Adorable!

I know what you mean about the day of birth. Emily's birth rocked us to our core and I have a hard time thinking back on those days. It was very traumatic. Of course, now we know what a blessing we have received, but at that time we were in shock. She will be 6 in October. My how the time flies!

Thanks for sharing your precious boy(s) with us!

Happy Birthday Brayden!!! You look so happy and handsome on your big day! Enjoy your day sweet boy!

DOES HE WEAR DIAPERS