Put in the Corner 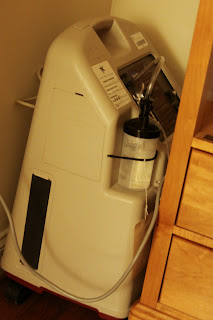 That awful oxygen concentrator is in the corner.  Possibly the loudest thing ever...and the siren/alert that goes off when you turn the machine on...deafening, Brayden may have wet his diaper a little each time the machine is turned on from being startled by the awful noise.


The reason Brayden had his tonsils and adenoids removed was due to pretty severe sleep apnea.  We would dstat many times at night, his oxygen saturation may dip into the 80s, 70s, 60s and a couple times it went into the 50s...dangerous I know.  I would gently wake him so he would take a deep breath and then watch his numbers go back up.
The couple of weeks home from the hospital, we still kept him on oxygen (nasal cannula) for sleep.  This past weekend I tried no oxygen.  I monitored several times that night (too many times, perhaps bothering him too much).  His numbers looked good, oxygen in the 90s.  The next night no oxygen, still checked him a few times.  We are now five days in with no oxygen at night and he is doing great.  I mean really great.  He is sleeping better, which makes his days better...he was even a good boy at school this week.
The tonsil and adenoid removal worked for him!

And I am also thankful that I do not have to wrestle him to get in the nasal spray, put on the nasal cannula and tape...oh that was a battle.  He does not like his face touched and he would get surprisingly strong to thrash his head back and forth so I could not do anything.
Now the oxygen concentrator is put back in the corner, not out in the middle of the room.  Still there in case it is needed or an ugly seizure (but we won't talk about that because he is doing good).
Posted by Jenkins at 7:29 PM

Awesome news! So happy for you guys!

i am saiful from Malaysia. my emel address ; sarkviolet@yahoo.com.my