Brayden had his adenoids and tonsils removed today.  The surgery was done at Children's in DC.
He was admitted directly to the ICU to monitor his breathing (since we have had a problem in the past); apnea; and seizures, in part due to the ketogenic diet that limits IV fluids and certain medications.

The surgery was quick.  The tonsils were completely removed; the top of the adenoids were removed 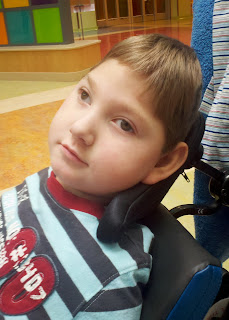 but the ENT left the bottom part due to him being hypotonic and help keep things a little supported.

The wait for the surgery was not quick.  As we waited in the pre-op room, they discovered that Brayden was not scheduled for the ICU.  Anesthesia, as well as the ENT, would not let him have the surgery unless he was going to be in the ICU for the night.  We waited as they scrambled to get things arranged.  First, there was no room in the ICU, then they could not get through to insurance to have the ICU approved.  All of this should have been arranged last week...thus the purpose of the pre-op appointments.  A couple of hours passed and we were still not sure if he was going to have the surgery or not.  Brayden was happy, in a great mood and even had a nap in daddy's lap.

Finally everything was set up for the surgery, anesthesia, ketogenic and ICU, so they rolled him off.  Surgery was done in about 40 minutes, a brief stop in the PACU and then he was taken directly to the ICU.


Brayden is in the ICU.  They are still working on managing his pain.  A respiratory therapist is right there watching and suctioning his secretions.  The neurology team stopped by to check on his ketogenic diet and try to figure out his seizure medications (hard to do on ketogenic diet and not all are available via IV).
Brayden handled the surgery pretty well.  They did warn us that after the surgery he may have still been intubated.  When we walked in the ICU we did not know what to find; but he is only on oxygen by nasal cannula (not at all intubated) so that was great to see and know he handled being intubated for the surgery.  He stills seems to be in pain despite the doses of morphine.   They will watch him through the night and tomorrow as the swelling continues.  If all goes well, he still could go home tomorrow late afternoon.  For now, lets pray his pain is controlled and he sleeps (and for Jeremy to get a little shut-eye since he does the nights at the hospital). 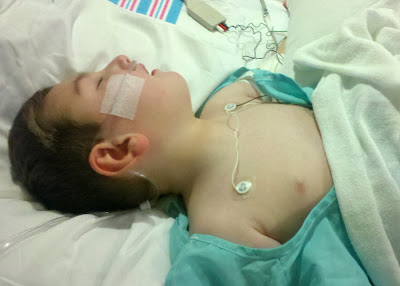 Thank you for your prayers, emails, texts and calls.
Posted by Jenkins at 7:40 PM

Such fantastic news, Carrie!!! I was thinking and praying for your family yesterday. I hope things continued to go well last night and you will be able to be home tonight. Sending lots of love your way!!