Last night was rough for Brayden.  Very little sleep fo him (as well as Jeremy), as they camped out in the ICU.  First they had trouble managing Brayden's pain.  It seems as though Brayden does not react well to morphine.  He gets more upset and agitated after the doses of morphine were given.  He was switched to Tylenol with codeine sometime in the night.  After the morphine wore off and the codeine set in, Brayden was doing a bit better.  But he was gagging and vomiting constantly throughout the night.  The extra secretions, pain, swelling and crying caused him to keep vomiting...then they would suction out his mouth over and over again. 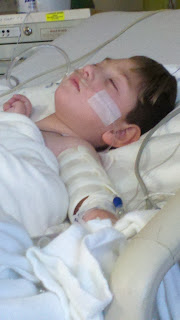 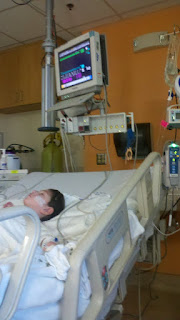 By the morning, Brayden was doing much better.  The tylenol with codeine was working and Brayden was not gagging/vomiting as much.  They wanted to watch him for the day to see if he could go home.  Brayden made it through the day with only a couple of vomits, couple of seizures and a few times of dsat while he was sleeping (which he does at home).  After talking with the ICU team (who talked to the neurology team, keto and ENT), they decided he could go home.  The discharge crew came by to make sure we had suction, oxygen, monitor, etc. at home...and those prescriptions for amoxicillin and codeine.
Now, Brayden is resting comfortably in his own bed.  He looks exhausted so hopefully he will get a good night sleep tonight. And I will being sleeping in his room tonight...there to suction at a moments notice.
Posted by Jenkins at 7:42 PM

I am so glad to hear that you are home again and that the surgery went well. I will be praying for a speedy recovery for your sweet little man.

Hope you both got a good night's sleep! Praying for comfort and healing! Hugs!