The appointment this morning was successful.

An early start...I loaded all three boys into the car shortly after 7:00 a.m.  Carter for the bus stop.  Luke for a neighbor (who had him over that early!).  Brayden and I heading to the orthopedist.

Rain, and lots of it, had been coming and going since the wee hours of the morning so we left pretty early because rain does some damage to the traffic in the Washington DC area.  Thankfully the traffic was not too bad because we arrived 30 minutes before the office opened.  We were the first ones in, first on the sign-in sheet and first for the cast. 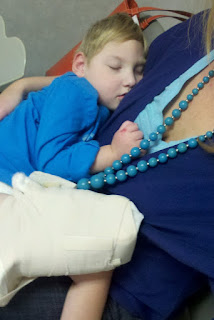 Brayden did not handle it all too well.  He screamed until he fell asleep in my arms, of course before the doctor came in.

The orthopedist reviewed the x-rays from the ER.  Yes, a break in the femur.


Time for a cast.  Choice of color, blue.  The tech removed the temporary splint and it had already bruised his shin and cause a spot of skin break-down.  Then the doctor gently pulled on Brayden's leg to straighten it a bit for the cast placement.  Did I mention Brayden is screaming in pain?  The cast was gently wrapped around and around, from his toes to the top of his hip.  Brayden still screaming.  I did pack an extra dose of Tylenol with codeine. 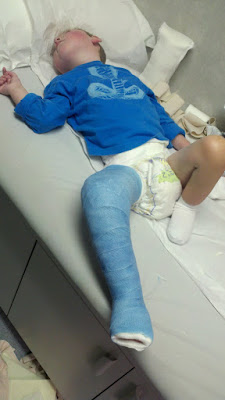 The cast dried and then he had a few more/better x-rays.
Thankfully the break in the femur is not too bad.  Brayden could have the cast on for only 3 weeks.
The cast seems to weigh more than his does.  Picking him up, putting him in his wheelchair, loading him in the car, carrying him up the steps, putting him in the bed...all very awkward and while trying not to upset him anymore.  He is not too happy this afternoon.  He screamed all the way home from the doctor.

He is not pleased with having a cast.

Answered prayers that we got in with the orthopedist quickly this morning, that the break is not too bad, they could straighten his leg in the office, it is shorts season and we do not have to struggle to put him in pants.
Posted by Jenkins at 4:47 PM

I am SO pleased that you were able to get in this morning!! I hope B settles into the cast soon and that the next 3 weeks pass by quickly for all of you. Praying!

Ohh, that is good, GOOD news! Thank God! I hope now that the leg heals perfectly and beautifully and that there are no other complicating factors. I also hope Luke is doing well :)

Praise the Lord, so glad they could get him in for the cast. Praying that the pain decreases quickly.

Oh my...that certainly does not look easy to maneuver! You will need some of that Tylenol for your back after 3 weeks!!!
Praying he heals quickly!

Sounds like a trying day for both of you! But, glad to hear that the break isn't too bad.....and that he will likely have the cast on for a short duration! Hope it goes well for all of you, and that Brayden is able to adjust to this well! Love, Hugs and Prayers!

Wow Carrie- so glad you finally got in and got settled, but sorry it was such a hassle to make happen! I pray he heals quickly and thankful is is shorts season:) Always a silver lining, right?

So glad that you were able to get in with the doctor and were able to get some good news (not a bad break, only a few weeks with the cast). That cast does look cumbersome. We just did serial casting on Emily and I know exactly what you mean about it making regular activities so much more challenging! Hope Brayden is able to adjust to the cast very soon.