Acute Pancreatitis it is...or is it Chronic? 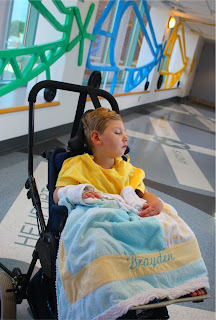 Brayden's pancreatic levels are coming down. The GI doctor is treating him for acute pancreatitis. Brayden vomited blood in the wee hours of the morning and a few times, just stomach bile and saliva, throughout the day.

Brayden's gut has rested and seems to be doing better. He was quite happy most of the day and excited to have some visitors (Great Grandma, Great Grandpa, Aunt Janine, Aunt Heather and Youth Pastor Shull from our church). He was "talking", smiling and pleased to have people around. We even had a couple of opportunities to unhook all the monitors and stuff, for a ride around the floor in his wheel chair, a look at the playroom and a chance to sit outside in the children's courtyard.
Doing all of that to pass time until the doctor came in.
The GI doctor at Fairfax did speak with Brayden's GI doctor at Children's. They reviewed Brayden's lab work and tests from his stays at Children's and the pancreas was never tested. I don't think because of negligence on the doctor's part, it just never came up, he never had history of things that would bother the pancreas and other indicators of such a problem were not apparent (other than vomiting).
That is why a fresh pair of eyes helps. These doctors at Fairfax, that we have never met, thought to look at the pancreatic levels (amongst many other tests).
We have no idea if this was a problem in the past and the only way to know if it is a chronic problem is that each time these extreme vomiting episodes come up in the future then his pancreas will be looked at.
The plan for now, is to continue the IV fluids, start Brayden on Pedialyte via his J-tube, then a bit of Pedialyte and formula, to formula. If everything goes smoothly then home is the next step.
It looks like the pancreatitis, at least the acute version is being taken care of...the chronic version is yet to be determined and still a BIG question mark for the vomiting.
I cannot forget the mention that we have the best neighbors...we love the Olivers. They treated Carter and Luke to an afternoon at a pool, lunch, snacks, dinner, lots of lovin' and fun.
Posted by Jenkins at 7:29 PM

Well, I am glad to hear they're figuring it out. Get better, Brayden!

Hopefully this will be the start of some answers for you. We'll keep praying for you all!

Dear ones: my prayers will b/w Brayden & your family.

The Lord specifically led me to this sight. I'm presently being treated @ U of M, however now instead of thinking about my needs; I will be praying for precious Brayden.

"May the God of hope
fill you with all joy and peace in believing, so that you may abound in hope by the power of the Holy Spirit" Rom.15;13