What does the EEG say? And GI?

Brayden had an EEG today. 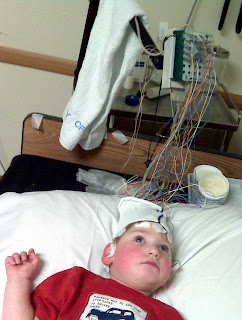 Brayden has had a few EEGs in the past and needless to say, the tests have been stressful. Each electrode is strategically placed; if he wiggles to much the electrodes can come loose and need to be put back until all are on properly. Try putting twenty or so electrodes on a child who cannot stand for his head to be touched. Once the electrodes are in place, he must be still and then hopefully fall asleep. Once asleep for several minutes, we wake him up and flash a strobe light in his face (to try and induce some seizure activity). Sounds fun right?

Brayden did amazing today. He was a little frustrated when the tech was placing all of the electrodes on but he settled in and actually feel asleep.

Once the EEG test was completed, Brayden's neurologist stopped in to quickly review the results.

What did the EEG say?

Brayden's left side of the brain had very little activity. At first I thought that was good, right? Not really, there was very little activity, as in not much at all and there should be more. But this was not a surprise to us, that is what his other EEGs have said. We were hoping that as he got older there could be more going on...maybe next time.

Brayden's right side of the brain showed lots of abnormal activity; many little spikes in the reading. This is probably where Brayden's seizures are originating.

Brayden's is still diagnosed with partial complex seizures. The neurologist still thinks that he will be moving from partial complex to generalized. For now, his seizures are dealt with as partial complex and he will continue on the same medications, just increasing the dose.

On the way out the door this morning (as we were heading to Children's for the EEG), Brayden's GI doctor called. Brayden's vomiting has not been any violent retching for about five days and no signs of blood so the doctor said NO hospital stay! We will continue to watch him and for now, live with a moderate amount of vomiting a day. Of course we were told that if Brayden's vomiting gets out of control or shows signs of blood again, then we are to check into the hospital.

I have given Brayden a stern talking to about the vomiting. He is going to do his best to keep the vomiting to a minimum (and seizures).
Posted by Jenkins at 6:02 PM