Carter, my oldest, is starting kindergarten next week. I know that he will handle this new step in his life with ease and excitement. He has always been able to step in to new situations without much concern. He might be timid at first but that quickly fades and he will be comfortable with new friends. As his mom, this makes me more comfortable with him starting kindergarten. Of course I have normal concerns about taking the bus, adjusting to a new teacher, new school and new friends. I was talking with a neighbor, whose son will be in Carter’s class. We both agreed that we are concerned about our children fitting in, making new friends and not being left out.

Isn’t that everyone’s concern; for ourselves and our children? No one likes the feeling of being left out.

My heart aches when we are at the playground and I see a child being left out. I never want my children or any child to feel less important and left out.

This past week we joined the Jenkins families at the lake. I was concerned about going weeks before we went. I did not know how Brayden was going to handle the situation and I did not know how I was going to handle Brayden handling the situation (did you understand that?). The first couple of days were a bit rough for him. He seemed overwhelmed with being in a new place and all of the noise that comes along with cousins playing everywhere around him. He vomited several times and threw in a few seizures to start off the week. One vomit was so big that the entire pac-n-play was covered and required a huge scrub down, yuck! Immediately I was feeling left out. I knew that I needed to stay at the house with him instead of heading out on the boats. Brayden needed to settle and adjust. I was concerned that once we are able to take him on the boat, things would not go well for him. Then we would have to have someone drive the boat back to drop us off and we would disrupt everyone’s fun.

Over the summer we have discovered that Brayden does not sweat. He does not seem to have the ability to control his body temperature effectively. Instead of sweating his gets a fever. Just by touching him, you can feel how hot his little body is but not a drop of sweat to be found. The doctors are finding that Brayden’s autonomic nervous system does not seem to function properly. Yet another reason, the boat might not have been a good idea for him.

I always want Brayden to be a part of the action. He actually is a people person. He likes for the noise (not too much noise) of people talking and playing to surround him. We found that he seems to call out for people to come and be around him.

The weather at the lake was marvelous. Cool in the morning; cool enough for Brayden to join everyone on the boat. After a rough first couple of days and my worries, Brayden loved the boat. He did not mind the life vest, the boat ride or the kids playing around him. When the boat was parked by the shore for the children to play, we placed Brayden in his KidKart and he was happy just being there.

This summer has been difficult for Brayden. He had so many doctor 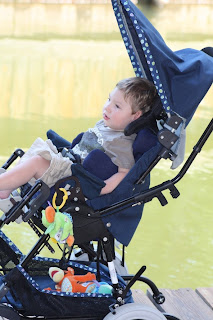 appointments, more tests and hospital stays. I have been feeling left out because not being able to go to bible studies, play dates, parties or just popping over to a friend's house. My time has been consumed with taking care of my boys, a bit of tunnel vision. I talk with friends and neighbors; the world continues to move on with or without me being there.

As least for the lake we were there, in the action. No reason to feel left out.
Posted by Jenkins at 8:47 AM