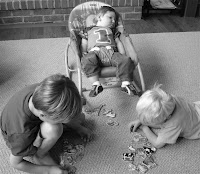 Today Carter and Luke were making up their own game. They had pictures of animals spread out all over the floor. One would describe the animal’s characteristics then the other would guess which animal. If they guessed correctly, they got to keep the picture. I was walking around doing some house work when I noticed Carter ask Brayden if he wanted to play too. Carter and Luke then pulled Brayden, who was sitting in his chair, over to their game.

I stepped back to watch. They each had a turn. When it was Brayden’s turn they would say something like “It is little with lots of feathers.” Pause for a moment. Then, “That’s right Brayden, it is a rooster!” Then they would move on to whom ever was next. They went around and around. Each taking turns and filling in for Brayden’s lack of words. By the end, each of them had a pile of animals.

Later this afternoon they decided, Brayden also, to watch a movie they checked out at the library. Carter pulled him over and they all sat together watching a movie.

I loved watching them include him. They love him completely and unconditionally. They do not see all of his abnormalities and struggles. While they are aware that something is different about Brayden, it is not a big deal to them. When Brayden is upset, Luke sits beside him and sings Brayden’s favorite songs (according to Luke), Twinkle Twinkle Little Star and Jesus Loves Me. Carter always talks to him as if he was talking back; he has also learned to recognize some of Brayden’s seizures and comforts him when they happen. The boys do not question why Brayden is not doing much or why mommy and daddy have to spend so much time caring for him. They love him and his is their brother, that is all there is to it.

I pray that it will continue this way; that they will love him, protect him and learn from him. Brayden’s life will help shape their lives as much as it is shaping mine.
Posted by Jenkins at 6:40 PM

What precious boys you have. Noah was pretty sad about the trampoline picture from your other blog after the storm. I wish he had boys like your's to play with here!