The past few months, Brayden has been sleeping 18-20 hrs a day, without much cause or reason. 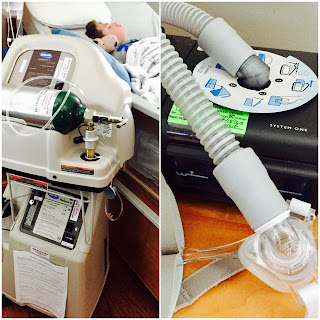 The past few months Brayden has had severe apnea episodes during the day (not at night when we expect them to happen during deep sleep)...basically his brain forgets to tell him to breathe/exist.  He becomes unresponsive, even to the most obnoxious stimulus.  These episodes seem to come on quickly.  His oxygen saturation stats drop significantly.  We have to quickly attempt to wake him (which does not work every time) or hook him up to his BiPAP or oxygen.  Then it takes awhile for his oxygen/breathing to normalize.

We sent video to the doctors.  Then we went in for bloodwork.  All of his blood work looks good.  All except the CO2 levels in his body.  They are elevated, not quite to a hospital-needed-level, but elevated enough to show there is a chronic problem with his breathing and his body not properly releasing the CO2.  Thus the likely reason for many hours of sleeping and the other apnea episodes.

Brayden's brain does not always seem to be sending him proper signals.  And now it is having an impact on his breathing.

There is no intervention that we can do (or are willing to do) to improve his breathing.  We will continue to use BiPap and oxygen at home, while these provide him air, it actually serves as a constant annoyance to remind his brain to breathe.  Unfortunately, this is does not seem like something that will get better for him over time, it would get worse.  As for the amount of time that it would get worse, is very undetermined, it could be weeks, months, years.

But we have crossed over in to a more severe/serious category with Brayden's health, as well as decisions that Jeremy and I would need to make regarding any (if any) medical intervention from here on out.

The last few weeks, Jeremy and I have been attempting to lay the groundwork for Brayden's undetermined future.  We have not shared much until now because we really needed to take in a lot of information, sort through it with his doctors and decide how best to handle it all.


We talked with Palliative Care at Children's, Brayden's pediatrician and neurologist.  All have given their honest opinions and helped lay out our next options.

Here is where we are thus far: 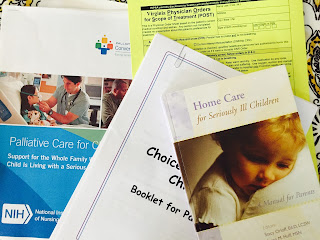 Basically, the overall plan is to focus on Brayden's comfort and quality of life, rather than seeking out any major medical interventions.  All of his doctors agree with this (in fact were the ones who brought it up to us anyway).  Also for Jeremy and I to plan for what-if scenarios, so that he and I are on the same page and we can communicate that to those who help care for Brayden day-to-day or in an emergency. 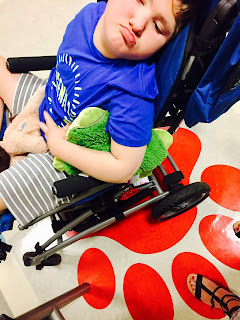 Honestly, we are attempting to just shift in our mindset of how we take care of Brayden.  For example, I spent many years talking (or arguing, depending on who it was) with Brayden's home care nurses about his time in bed.  I have always been adamant that he would NOT be a bedridden boy, basically he was a little boy and needed to get out participate in life, however he could.  Now, it is more like...well, Brayden is so very content and happy in his bed so why push him. He loves his bed.

We will be focusing more on Brayden being content, comfortable and happy, rather than seeking further medical interventions (but still continuing with his current plan of care) and even just in basic things like not forcing him to school all the time (school is still good for him but I will let up with trying to get him there as much as possible).

Lots of very heavy, hard conversations over the past few weeks.  We very much trust and respect Brayden's pediatrician and neurologist, who are all on the same page.

And we whole-heartedly trust God, for whatever the plans may be.

One thing we do not have to worry about is Brayden's weight...the scale hit 85 lbs this week.
Posted by Jenkins at 5:34 PM

Oh Carrie, knowing what you are going thru, I can only say follow your heart and trust in God. You guys are awesome parents and we all are here for You,Brayden and your beautiful family...♡♡

God goes before you in every step you must take. And although He also walks beside you on your journeys, He also calls us to walk beside you with encouragement, comfort, and powerful prayer. I am praying for you and am here for you what ever you may need. Uplifting prayers for you and thinking of you with love.
Sincerely,
Elena

Dear Carrie, You and Jeremy have done and are doing a wonderful job of caring for and nurturing Brayden. Your equanimity in the face of trials is remarkable. Ephesians 1 tells us that God works all things according to the counsel of His will. Heidi and I will pray for you as you wrestle with difficult decisions, even as you trust God's perfect care for your family. God's grace to you!!

Carrie, thank you for how you parent and care for all of your children, just a wonderful example. We love you guys.

Sending love from Colorado and praying for you guys. Love you.

What a wonderful gift from God to have a medical team that you can fully trust and respect and have confidence in their guidance as they walk through these decisions WITH you.
Praying for all of you - your decisions as parents, the conversations with Luke and Carter, your families; the creation of a working plan of action that can be clearly communicated. Lord God, go before Carrie and Jeremy as they walk the path you have chosen for them. Give them wisdom and discernment, bless them for their reliance on you. Walk right beside them in the hard conversations and above all give them YOUR Peace, which passes all understanding. Amen.