That is right, I am posting about the White House.  The real White House in Washington DC, where the President resides.

Many months ago, I was stuck in traffic in DC.  Sitting in my car on Constitution Ave in front of the White House.  An idea got in my head and I could not get it out...lets take Brayden's class to the White House.  So I made a phone call to a very special contact that could help me make this happen.

The next couple months were spent convincing the school (school system and transportation) that we could really pull this off, thankfully the school assistant principal was on our side.  Brayden's class gets one "field trip" a year and it is down the road to the high school, would going to Washington DC even be possible? I thought we hit a road block with transportation.  Each child in Brayden's class is in a wheelchair.  Each school bus hold 2 wheelchairs.  We needed 4 school buses at the cost of $5,000, money the school system does not have.  Determined to find funding, I starting searching for a donor.  Went to several businesses around the school, they were willing to help a little but nothing was a good fit (like a restaurant night...not going to work when most of the kids are tube fed).  I looked into other possible modes of transportation but getting 7 wheelchair bound kids, their families and school staff to DC was quite a big task.  I was talking to Jeremy about my efforts and he suggested reaching out some of the local Jenkins Restoration offices.  The Sterling, VA office and Rockville MD split the cost.  We had transportation!

Now we needed security clearance for all those attending and an actual date.  Each one of these children have an entourage.  Parents, nurses, aids, teachers, therapists...and that is the short list.  We gathered everyone's information, submitted the list to the White House and waited.  Once all were cleared through security, we got the date, December 4.  We were going to see the White House at Christmas, could it be any better?!

We still needed a place to tend to the children's medical needs before and after the White House visit.  While DC is not far from Brayden's school, each of these children have significant needs that require a lot of attention.  I drove to DC one afternoon and walked the streets next to the White House.  I asked some of my favorite hotels to donate a room.  I talked with a lot of people, without any real answer.  Finally, with some great assistance, a very swanky hotel offered us a conference room to use.

It was all coming together.  I also got word that some surprises were in store for the children. 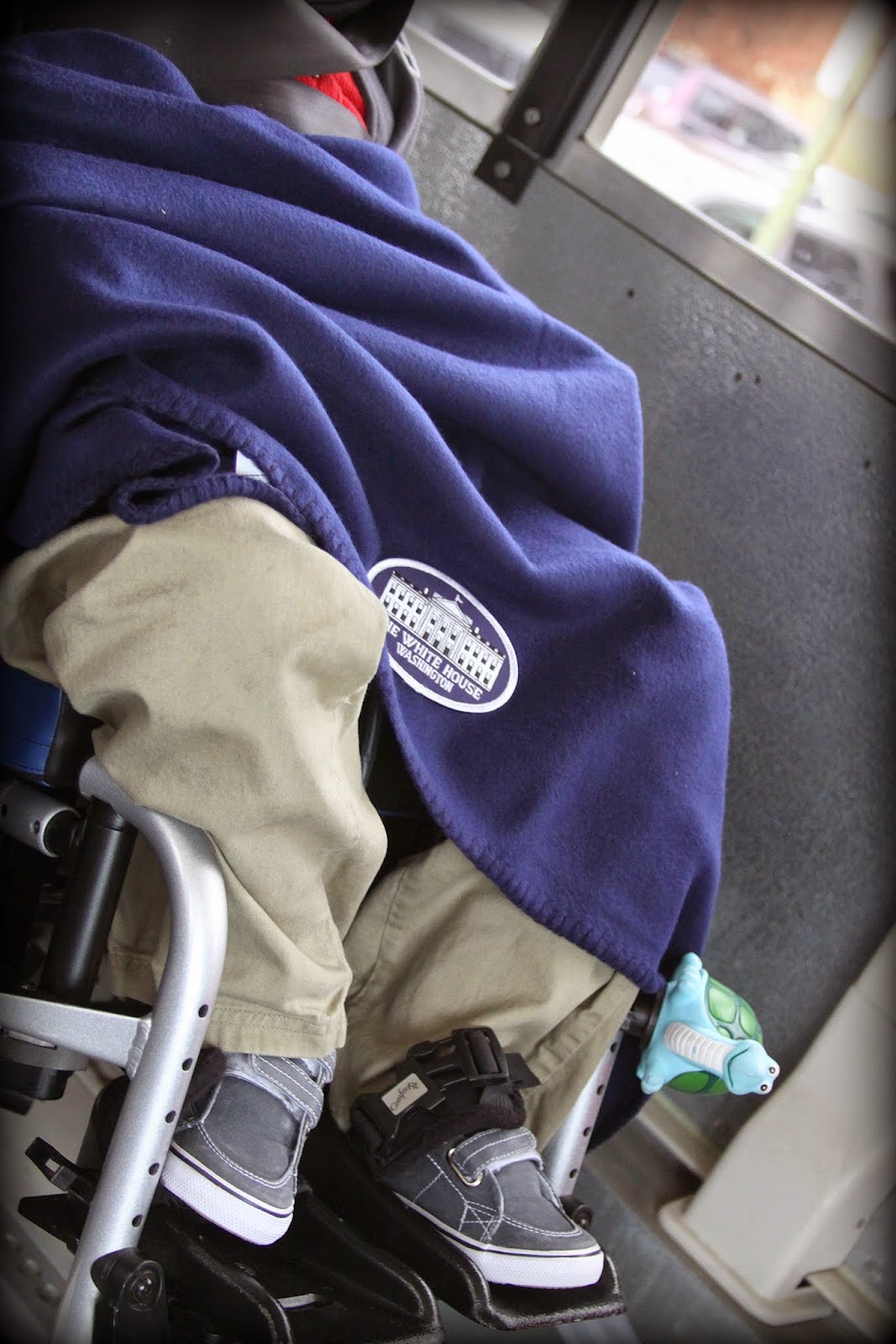 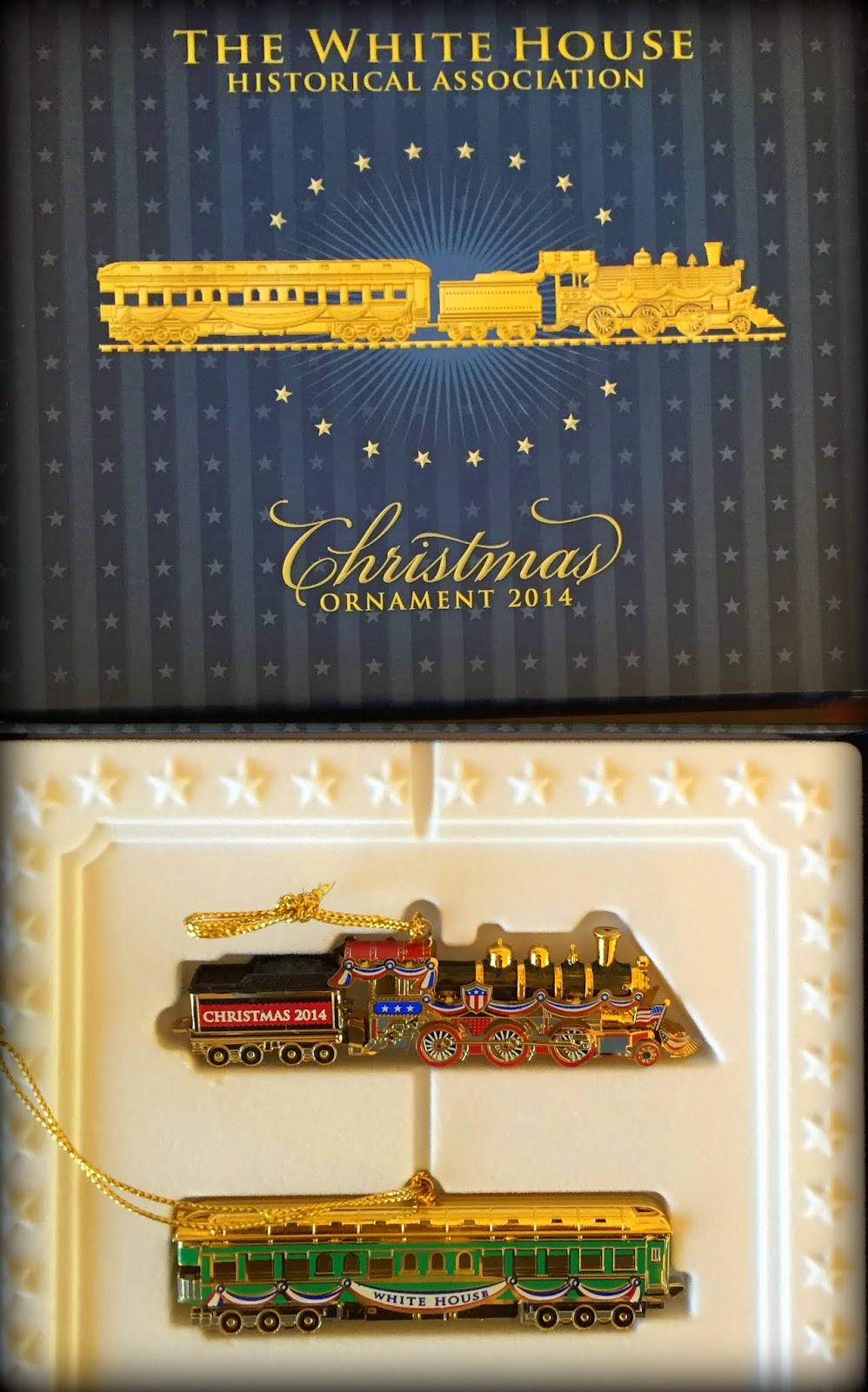 To make it all the more special we put together some goodies.  A White House fleece blanket for the kids to use the day of the tour, the official White House Christmas ornament for 2014, a lighted desktop Christmas tree and White House post cards.  Carter and Luke helped me stuff the bags and write tags for the kids, "from an elf".

Finally the day came.  We loaded the buses...a bit later than I would have like but getting 6 special needs kids (and their families) can be a challenge.  One of the students was not able to come since she had recently been in the hospital.  We had amazing bus drivers and bus aids that helped us with the ride, they were comfortable with driving/parking in DC.

Because of our very late departure, I worried we would not make our tour time.  The White House was very specific and firm about where to meet and what time to meet.  We could not be late.

We barely made it.  The buses unloaded (ended up with 3 buses).  But no time to go to the hotel.  I hopped in a cab, with a couple of helpers, to run the kids equipment and supplies to the hotel since you cannot take anything into the White House (not even a purse).  Made it back to join the crew and we walked over to the White House entrance where we met our special White House contacts.

Entered the White House grounds, went through security, another round of security and then metal detectors (fun with kids in wheelchairs and some medical equipment).  Circled around the outside of the White House for a ramp entry.  As we entered, everyone was given the official White House Christmas book, that explains the theme of this years decorations, A Children's Winter Wonderland. 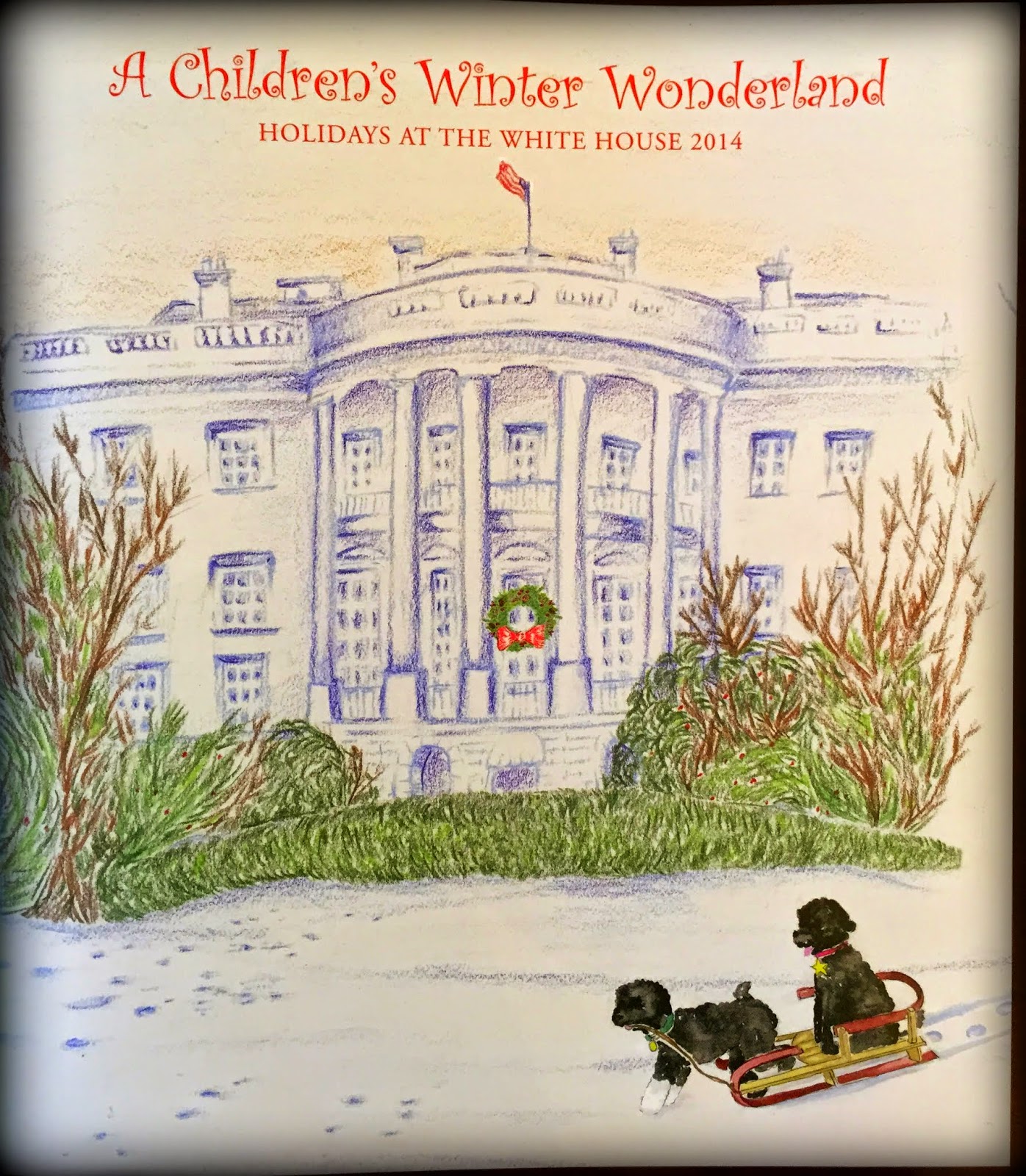 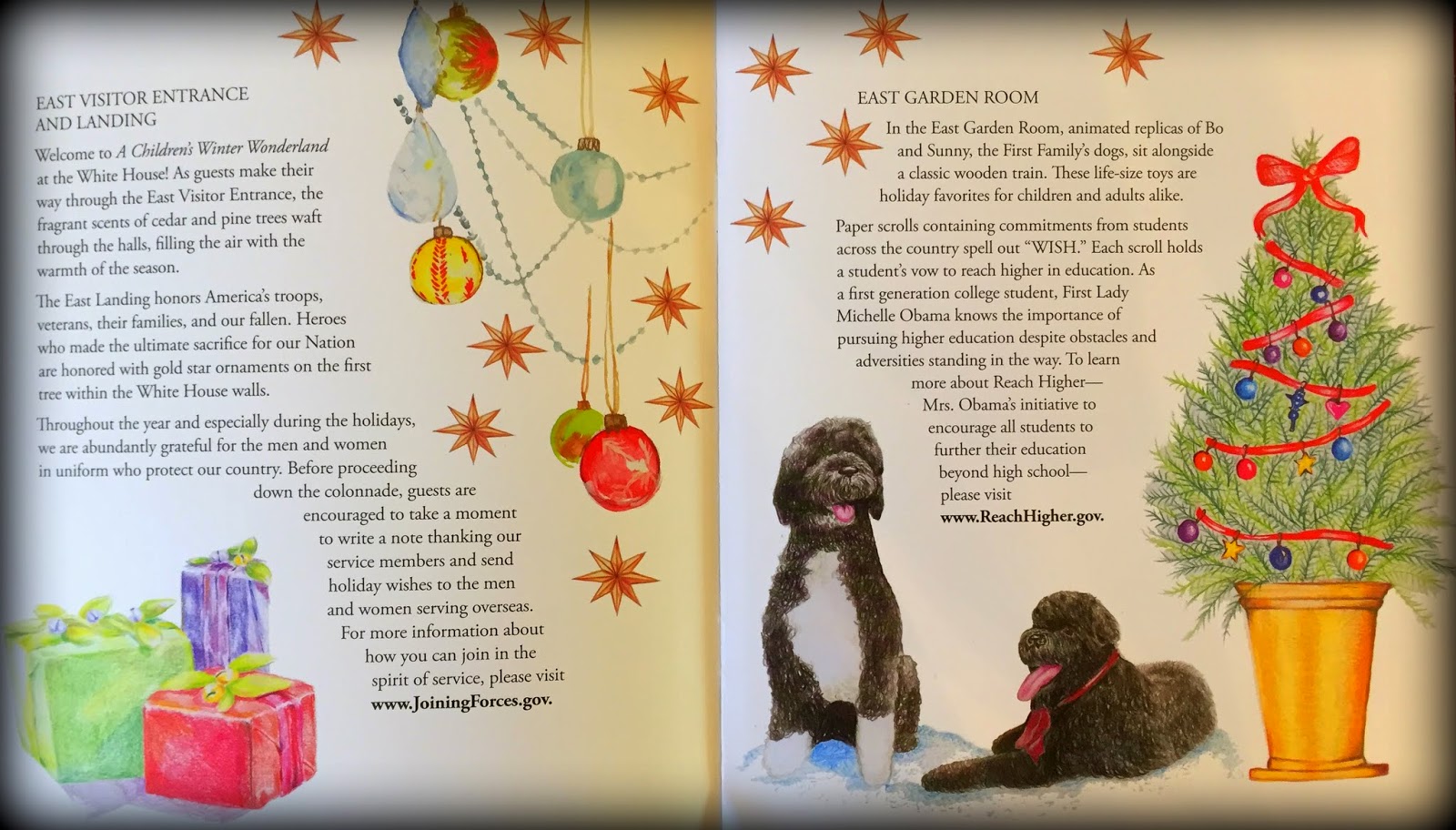 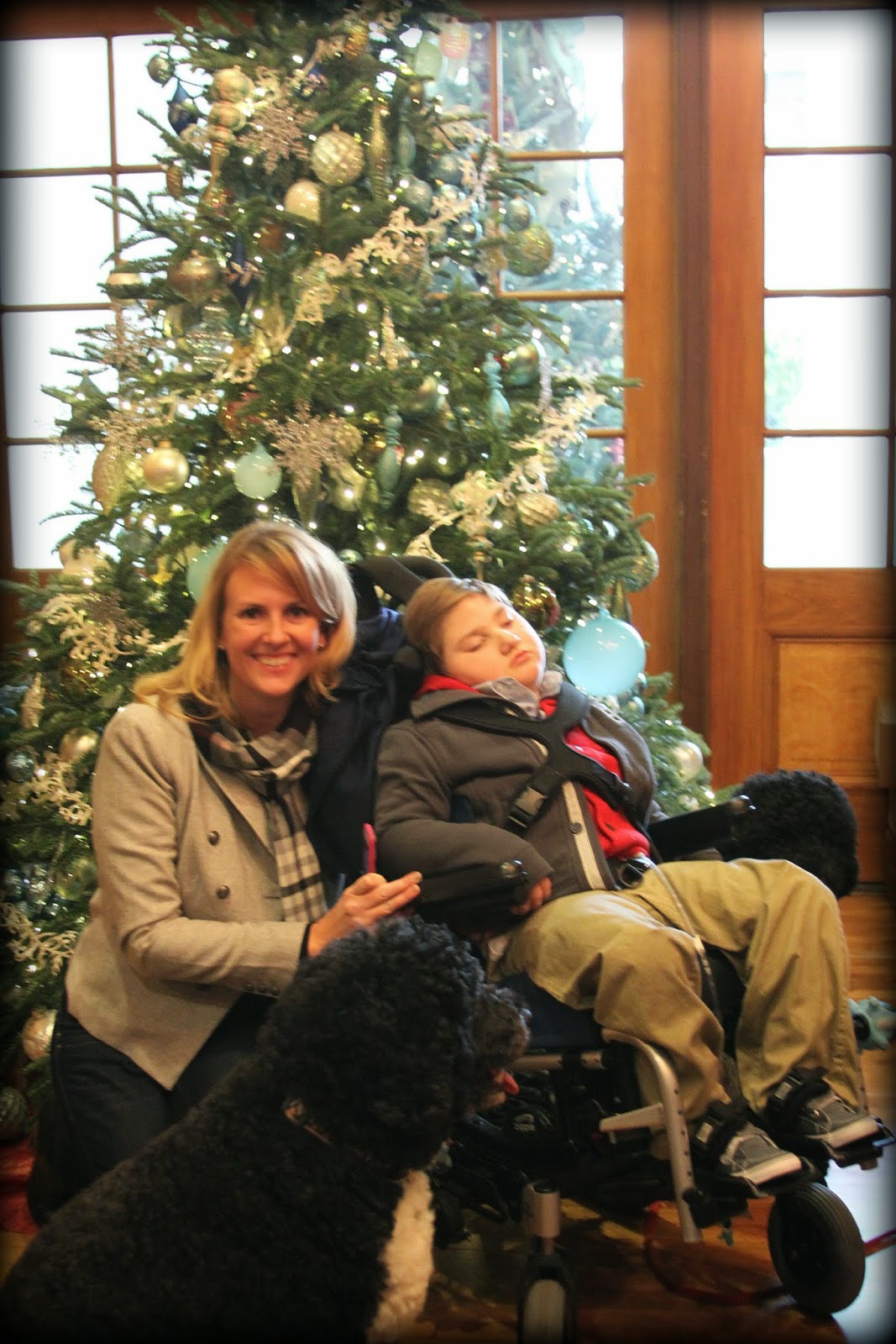 As we gathered inside, our group was quickly ushered into a private room.  A staffer from the First Ladies office spoke with us and told us that someone else would be in shortly to talk more about the First Lady.  Then a back door opened and in came two dogs.  The Presidential dogs, Bo and Sunny, along with their handler.  The dogs were precious.  Letting the children pet them and pose for pictures.  The dogs were absolutely sweet and so well mannered.  We went through rounds of photo ops, talked with a few staff members from the First Ladies office and then headed out for the Christmas tour.  Very few people can say they have spent time with the Presidential dogs and our children had this amazing opportunity (and truth be told they would rather spend time with the dogs than the POTUS or FLOTUS).  The dogs were there just for our children, special arrangements were made by some wonderful people to give them this special meet and greet.

The White House was VERY busy this day, the President was coming and going (saw motorcade preparing for him). the First Lady had an event down the street and everyone was prepping the White House Pageant of Peace (the White House Christmas tree lighting) that hosted several celebrities.  Any direction you looked, people were every where.  And others were in the White House for a tour. 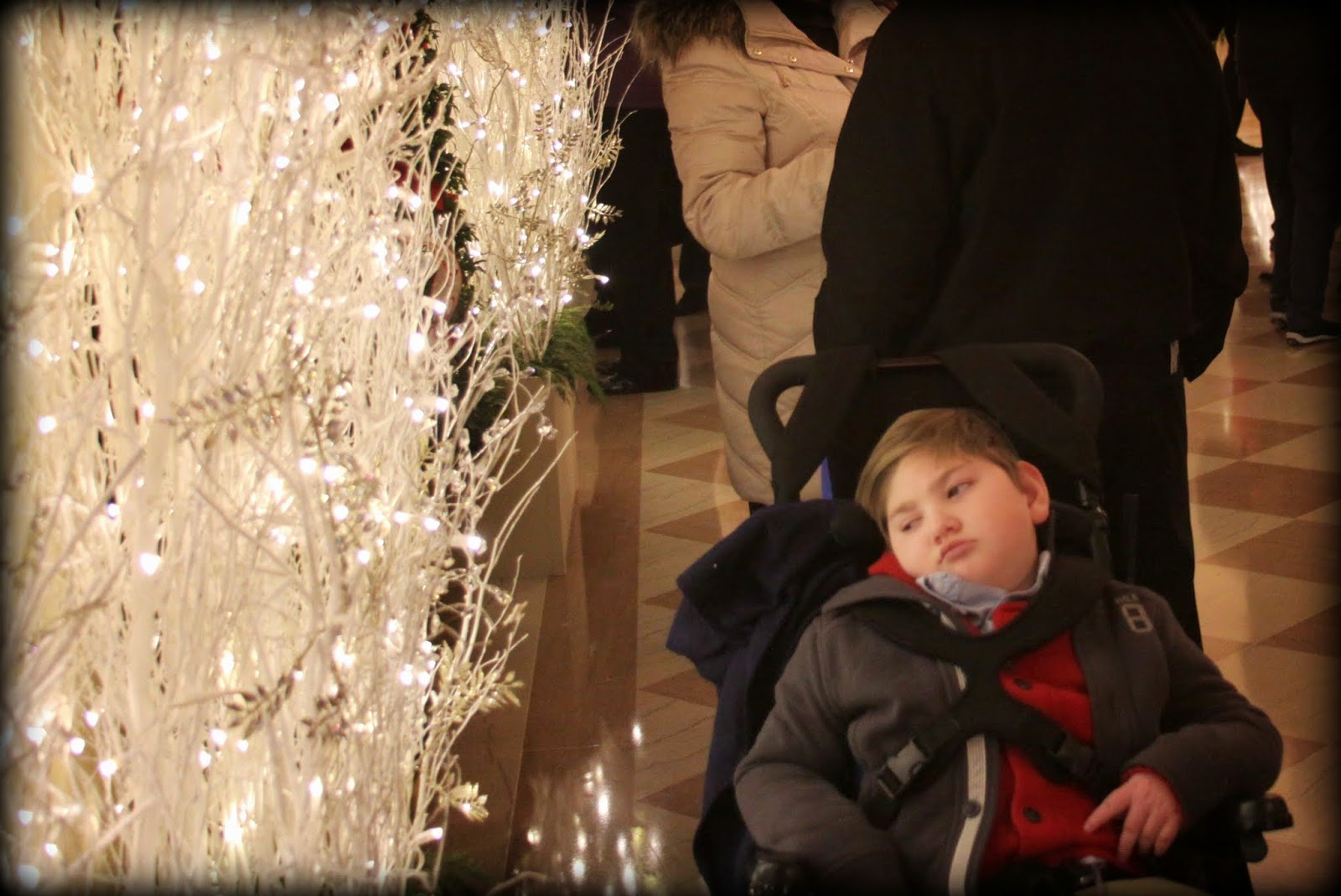 After the dogs, we started our tour.  Wandering the halls and looking at the room of the White House.  Lot of pictures and memory making moments.

And since the White House has many stairs, we had to take some alternate routes through the White House, places we felt like we should not be...even passing by the press staging area outside and press room. 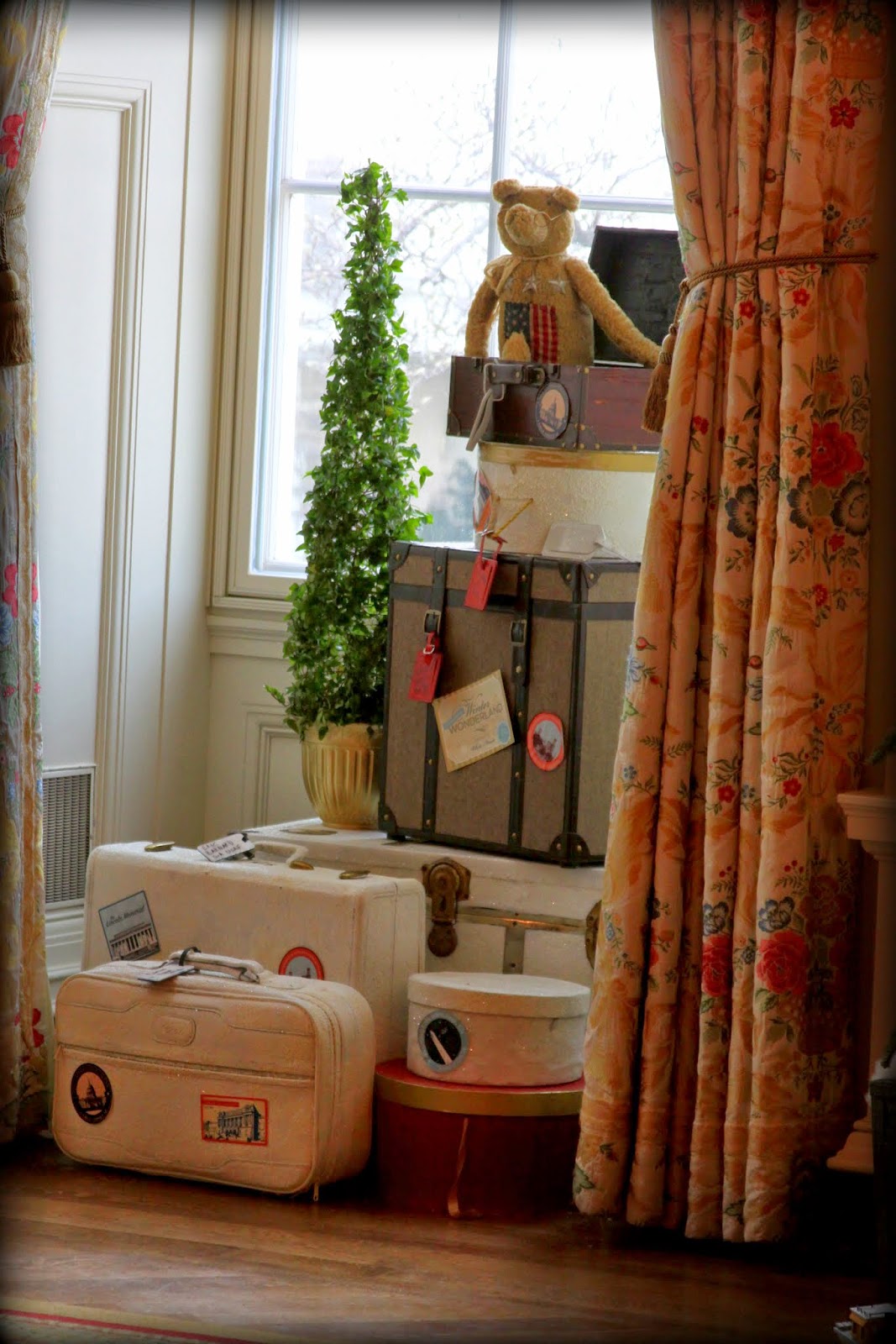 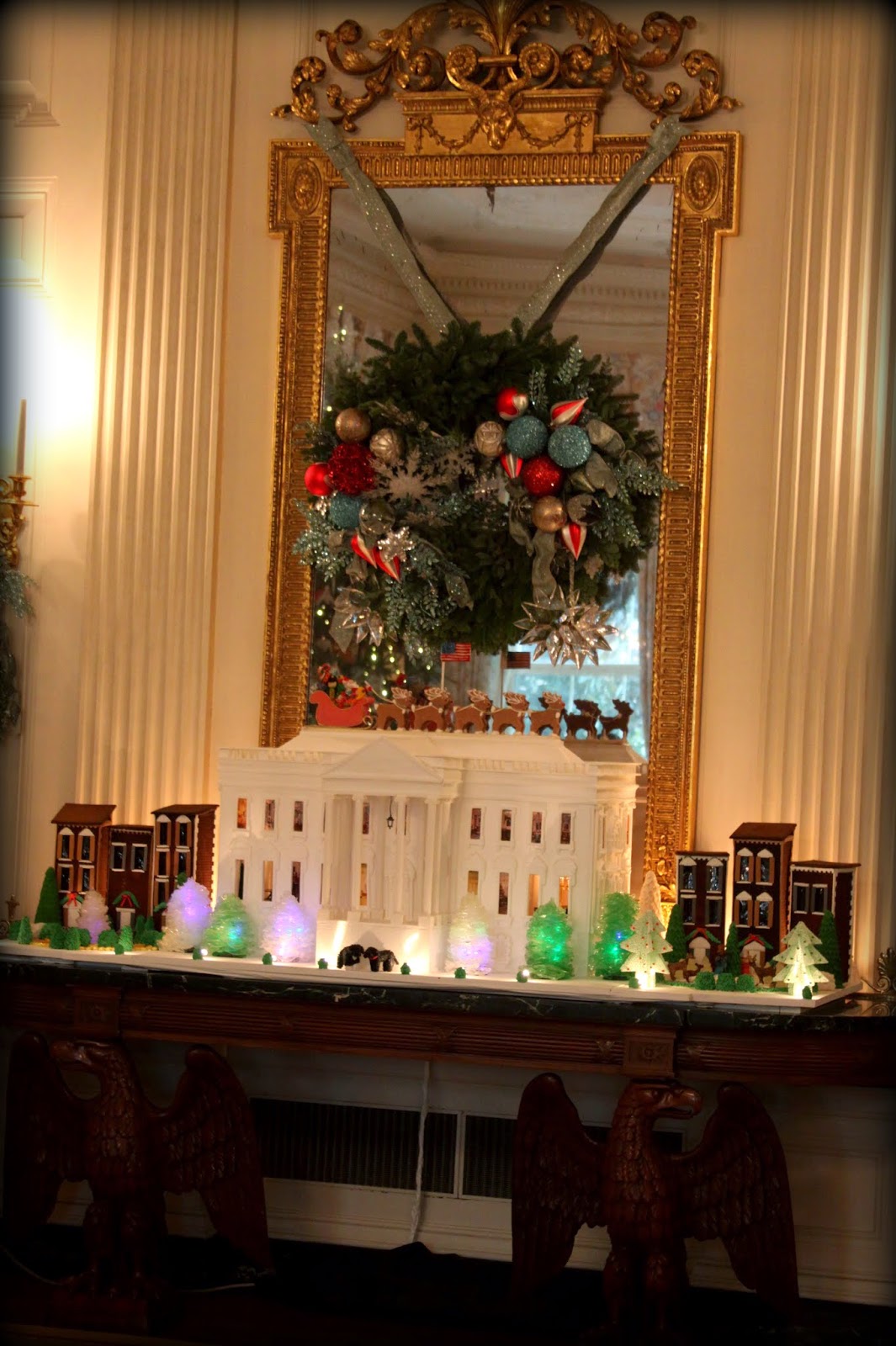 It was almost hard to take it all in.  Wanting to study each area, thinking about the history, the people that have been in the rooms and seeing all of the decorations.  Brayden could not have been any more content.  Spending the day with his mom, being pushed around and lots of lights. 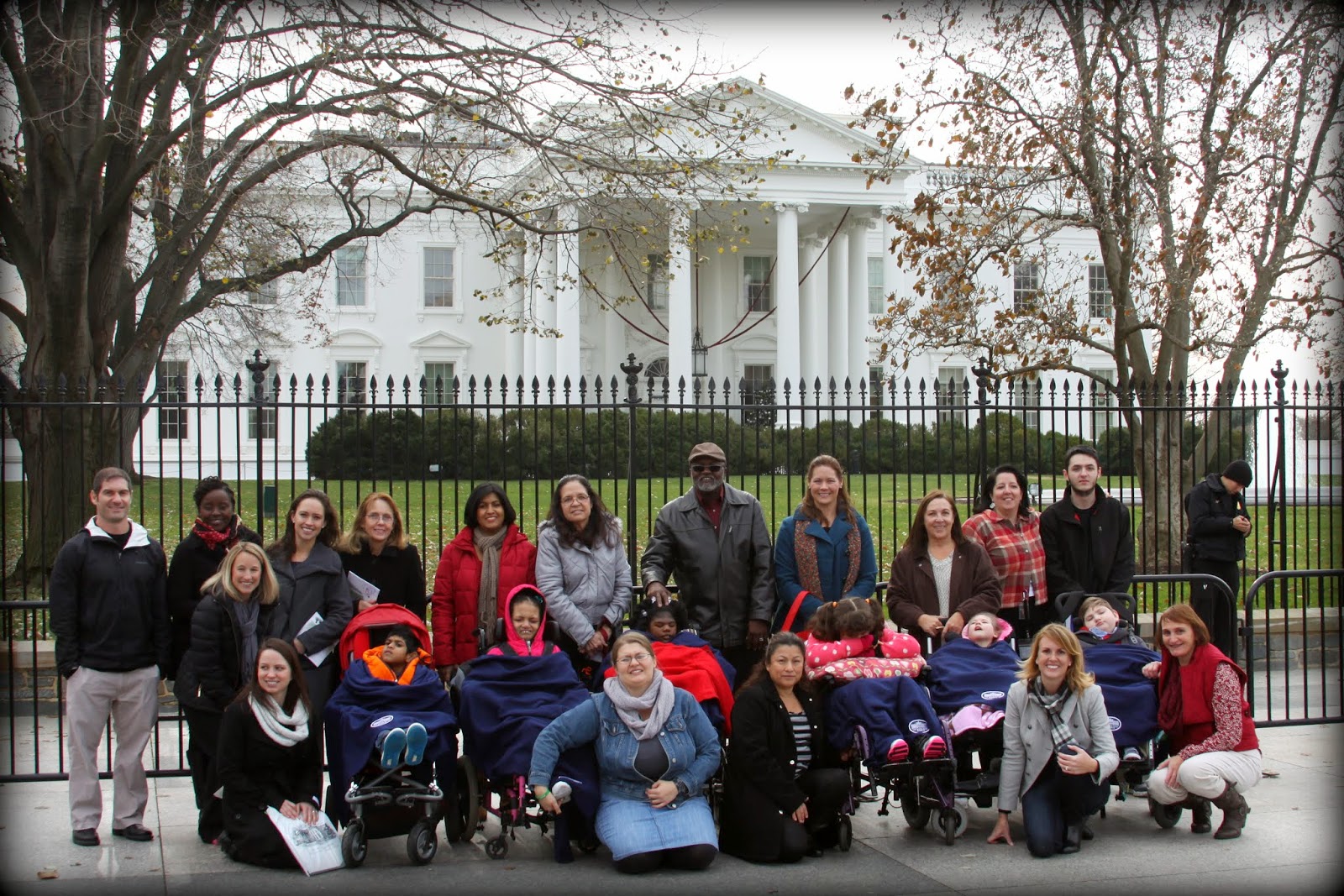 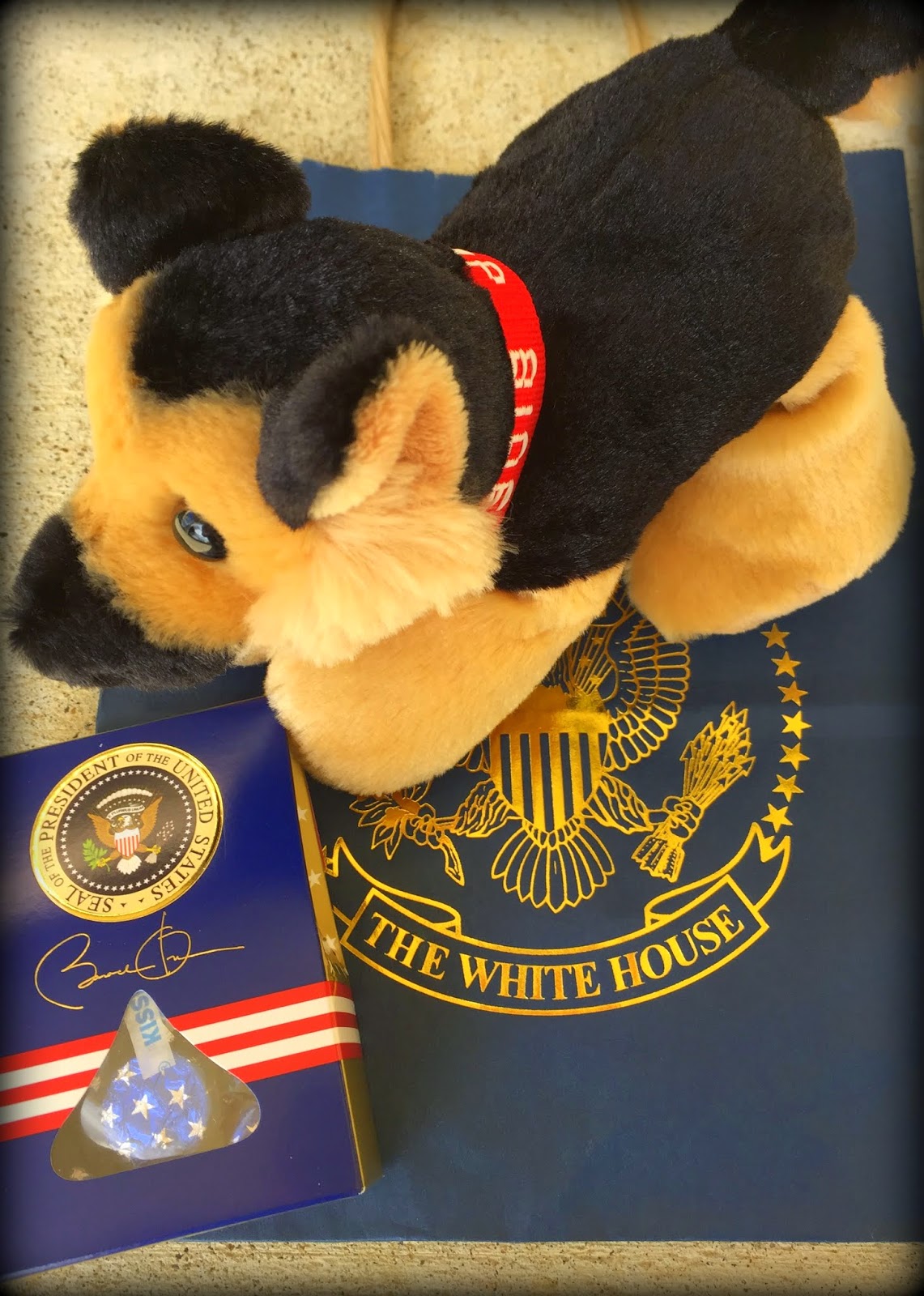 Once the tour was complete, we went outside to take more photos.  We thought all the excitement was starting to wind down but then each child was presented with a personalized letter from the First Lady.  We snapped more photos and someone else appeared with gift bags from the Vice President's office, inside was a stuffed animal of the VPOTUS's dog, Champ, and official White House candy.
Could this day get any more special?!

We left the White House and headed toward the hotel, thankfully quite close to where we exited the White House grounds.  We had very little time till the buses needed to load and head back for school.  Several of us gathered the children in the room provided (the rest stayed in the lobby).  The hotel had hot chocolate ready for us and adorable glass jars of gummy bears for our crew.  We tended to the children's needs as quickly as possible.  I did not plan for the White House time to take quite as long as it did because of each different surprise.  The children did great, most were tired and a bit hungry, and this might have been the quickest change around anyone had ever done for them.

The buses were loaded in the midst of very busy streets but everyone made it on and the ride back to school was very quiet, adults and children resting from the adventure.

It is hard to believe we actually were able to take the class to the White House for Christmas, an unbelievable experience.