It is a long day for him.  It was a long week for him.

Mon - First day, he did really well
Tues - He made a two day streak of doing really well
Wed - He realized that the school things was not a fluke and he was really going all the time.  He was not a happy camper this day.
Thurs - He surrendered to the idea of school and did pretty well.  But still protested in his own way.
Giving such a look (during his PT time).  Such a look that they snapped a picture and sent it to me. 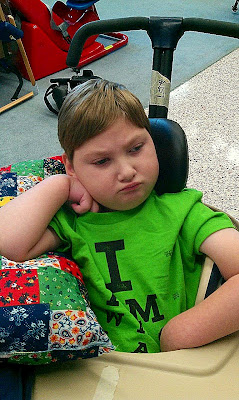 Fri - A great day...actually fantastic from beginning to end.  He seems so grown up this week.

I think Mon-Fri will work for him.
Posted by Jenkins at 5:43 PM

wow -- looks like brayden approves of his later school schedule. it's wonderful to hear that he's adjusting so well!! YEAH!

i LOVE his t-shirt!