This blog is all about Brayden.  But what about his older brothers, Carter and Luke? 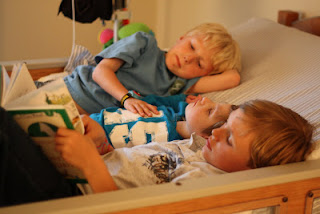 How is it to be Carter and Luke?
My heart has been heavy for them lately.  In their short lives, they have seen and heard, had front row seats to very serious and traumatic events.

As Brayden’s big brothers, they had to quickly learn that life is not about them.  They have seen their brother in very dire situations, ICU, hospitals, tests, etc.

They know how to operate the feeding pump, pulse ox, and Brayden’s other machines. They know how to handle Brayden’s seizures, poor breathing, projectile vomit (even with blood), hold gauze over open holes in Brayden’s body when tube comes out…all have become somewhat of a disturbing norm to them but nonetheless it can add chaos to a day.

Their life always has a level in instability.  Many years they have watched their parents rush off to the hospital or spend days with doctors, not quite knowing where they would end up, whether at a neighbors or in the ambulance with their brother.  Not knowing when anyone would be home and learning to be self sufficient.

Even when not rushing to hospital, there is always a chance for instability within the house.  A simple example, I was loading Brayden so I could take the boys to practice.  But as I was loading, Brayden’s feeding tube popped out…which delays leaving and possibly making them late for practice.  Many nights they cannot be loud, have friends over, etc. because Brayden needs to a quiet environment.  When Brayden does come out with us, we always have an exit plan or a plan in case things go sideways with him.

Plans constantly change, vacations not taken, events not attended/adjusted but we still try to find fun for them and keep their routine as best as possible. 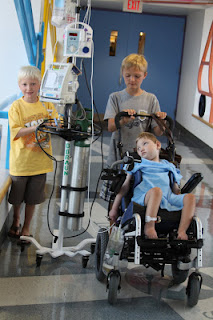 The boys handle people constantly in and out of our house who are part of Brayden’s care (some of which have been good and some have not).

Brayden’s needs trumps all others.  Fair or not.  Every bit of their life, has to go through the filter of Brayden.  We try to not make it seem like that is not the case but there is just no way around it.

They have seen (most often than I care to even admit) their parents completely depleted, exhausted and checked out because of dealing with the heaviness of Brayden’s medical events and needs.  They have seen fear and sadness in our eyes and in our countenance.

They know the seriousness of life as we have had discussions with them about Brayden’s health status. 10 years they have been a part of their brother’s roller coaster.  And now, as we enter a new phase of Brayden’s care in the palliative path.
-----
Then in the last couple of years Carter and Luke have seen and heard too much beyond just Brayden’s needs.  Things that will mark their childhood and how they see life and death. Just how many hard conversations have we had with them?!

Jeremy’s mother.  Carter and Luke realizing that their dad found his mother and we had to rush to the ER to help in some way.  Then Jeremy spent the next several (many) months rushing to find her, talk to her and to check on her.  Leaving Jeremy and his siblings in a constant state of concern and worry. Carter and Luke have seen their father physically collapse from those events.  Not even two years ago, Jeremy got the phone call that his mother died.  Carter and Luke were standing right next to him as he heard the words from his father.  Jeremy rushed off to his parent’s home.  Carter and Luke knew immediately what the call was about because of the months leading up to that day.   They found out the dramatic, awful details of the past several months (not by our choice, we tried to soften the details).  The loving grandmother that they saw many times in a week, was gone and even the previous months, she was just not herself.  Depression and suicide is now part of our family story and words they know all too well.  Since then, every holiday, birthday and event are now different since their grandmother was the center of the Jenkins activities.  The ripple of effects are constantly around.

Our house fire and rental house.  Being displaced for several months, the chaos and troubles that it brought.  And if I went into any detail about it, you just would not believe it…if anything could go wrong with the process and the rental it did.  It was awful.  A home should provide safety and comfort was just not happening.

Carter and Luke watched as other families have lost their child or loved ones, been to services and seen those moments.  People that had been a part of their lives.

This summer the boys and I planned to have a day with my brother and his family.  We planned to meet at the zoo.  As we packed the car that morning, I got a message that their 3 week old baby was up all night and they were taking him to the ER; seemingly nothing to concerning but wanted to have him checked.  The boys and I decided to still head to the zoo, thinking we could pick up the baby’s older brother and/or still see them either for lunch or at their home after they saw the doctors.  About an hour later, as we were driving to DC, I got a phone call.  It was my mom, screaming and sobbing that baby James had died, without cause or explanation.  I had to pull the car over on the highway, sat and sobbed with my mom, my boys sitting in absolute silence…they have heard that kind of phone call before.  I attempted to gather thoughts, get back on the road and figure out the next steps.  The following days were hard.  Carter and Luke saw their normally fun-loving, funny, joke-cracking Uncle Matt and Aunt Betsy broken in a way that is indescribable.

Just over a month later, Jeremy had a surprise for my 40th birthday.  He had all the boys situated for about 24 hours, so he and I could get away for a night.  As we were settling in to our hotel, my parents were in the car with Luke, heading to Carter’s basketball tournament.  My father got a phone call.  His father passed away.  Luke heard it all.  Luke’s healthy Great-Grandpa-at-the-Beach, had just seen his doctor a few days before and got a clean bill of health.  Luke riding with his Papa and Mimi as they had to turn the car around.  Jeremy and I left my birthday get away and headed to get Carter from his basketball.  Carter seeing us arrive, he obviously knew something was not right.  After his game, we explained to him what was happening.  We headed home so we could pack up and head to be with family.

-----
In all of this, we have constantly talked to the boys about God’s plan.  The promise of heaven. It is hard to have those conversations with them.  Because, even as adults, it is hard to understand these events, let alone help your children understand.  Sometimes we just do not know how they are taking it all in.  Oh how much I want to protect their hearts, want their faith to grow and not be crushed by the seeing the hardest parts of living in such a broken world.

As we make decisions for Carter and Luke, moving forward, trying to help find the best path for them, I ask that you pray for them and for us.  So much of our efforts have been in different directions over the years. The more people that look out for them, pray for them, love them and mentor them, the better, especially as we enter the teen years.

Thankfully Carter and Luke have been handling all of it quite well.  It seems as though their hearts have been protected in some way but there are times that they just want to be care-free kids.

And please pray for our family and friends that are grieving the loss of their children and loved ones.

Trauma and grief changes everything.


Proverbs 3:5 Trust in the Lord with all your heart and lean not on your own understanding.
Posted by Jenkins at 1:01 PM

Wow, you are probably the strongest person I know and yet we have never met. I have followed your blog for several years now and I just have no words. (I found you through mutual friends and was curious about your blog because of the title, then was drawn in because of the "story"). I have thought about writing before, but I never quite know what to say. Reading this recent post I still don't. But I have wondered about your other two boys, a lot actually. I am certain it is extremely hard for them for all the reasons you write, but yet somewhere in there...God appears. And somehow your entire family has continued on this incredible journey still in tact, still faithful. It amazes me. I don't want to write my opinion or anything that could be viewed as critical. I just want you to know that I am in awe of what you must go through every single minute of every day since Brayden was born and you must be one strong cookie to survive it! I can't say good luck, or hang in there, or anything because it sounds contrite. So I will just say hang onto your faith and God. He will see you through no matter what your choices or non-choices bring. He has proved that time and time again and it's good for people like me to see that. Sending you thoughts of peace and comfort. Your blog "friend" Sandy