Two Clinics in One day - One Big Decision 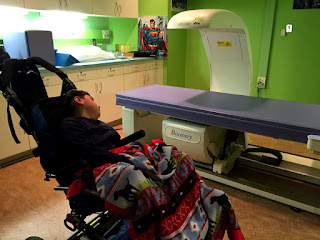 Brayden started the day in Bone Clinic at Children's.  First a dexascan to check his bone density, then talk with a team of doctors.  The scan did show his bone density is improving but still not on the chart.  It is improving, which shows he is benefitting from the bone infusions.  The ortho wants him to get his AFO braces very soon (which he has been wearing for years but his last pair was tossed from the fire and we have not had time to replace them yet).  She also wants Brayden to see a Physiatrist at Children's to help with Brayden's equipment, braces and positioning since Brayden's hips roll out, he has significant curvature in his spine and his ankles roll up; all things the otho and physiatrist watch and address.  Brayden also needs to get back on schedule for the bone infusions every three months (he is off schedule because this summer's mess). 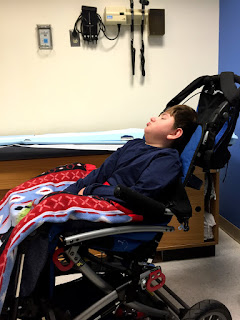 The afternoon was spent in the GI Motility clinic.  The appointment we have been waiting for, the appointment that determines the next major step for Brayden.  The doctor walked us through all of the test results (barium enema, biopsy, sitz marker, colonic manometry, anorectal manometry).  Brayden lower GI system is not working, colonic inertia.  And when he does have a bowel movement it immediately wipes him out/depletes him in some way that he is very lethargic and sickly.  As the doctor said, "teetering on the edge" and that "we have become accustomed to being on the edge we do not realize how close we are with him" (translation: he could spend more time being critically ill or in the ICU similar to this summer, if we do not address things properly).  There are many specifics that show his system not working properly, too many to list right now, but the doctor has the test results that show it all.
It has been recommended that Brayden has a surgery for ileostomy (any other options were ruled out because of Brayden's many other medical concerns).

Ileostomy can refer to a stoma (surgical opening) constructed by bringing the end or loop of small intestine (the ileum) out onto the surface of the skin and to the surgical procedure which creates this opening. Intestinal waste passes out of the ileostomy and is collected in an artificial external pouching system which is adhered to the skin.

We left the GI Motility clinic, walked down the hall and made an appointment with the surgeon.  On Monday we will meet with the surgeon to discuss options within the ileostomy surgery and when it will actually happen.  We assume the surgery will be sooner than later and Brayden will be in the hospital for about one week.

I dread even the idea of Brayden having an ileostomy.  But Jeremy and I both know it is what he needs.  It has been decided, Brayden will have an ileostomy.


And our house is slowly but surely becoming our home again.  The boys are absolutely thrilled to be home.  It will take some time to get things back in some sort of order (which, as you know, Jeremy and I are oh-so patient people, serious sarcasm).  There is still so much to do.  We are absolutely exhausted, an exhaustion I did not even know existed.  We are thrilled to at least be exhausted in our actual house.

Please pray for Brayden, he has just not been himself for several weeks now.  Pray that we are clear about the path to take for him.  Pray that Jeremy and I find some rest (and not the sleeping kind, our exhaustion is mentally and emotionally).  Pray that Carter and Luke handle every thing as well...praying we are not scarring them for life but shaping their character for the better.
It was a long day, long week, long month...long, long, long...
Posted by Jenkins at 11:00 PM

Glad you have answers yet hurt with you and Jeremy. Prays continue that God will supply all your family's needs. Love you-

If there is one thing I am confident of, it is that you are wonderful parents. Most of all, we have a big God who walks beside you always! You are not scarring anyone, but demonstrating what love looks like. As a result, character will be built. I am sorry that you all have been chosen to walk this path, but I stand with you in prayer so that you will be strengthened, comforted,and blessed every step of the way.

Prayers! We are feeling that type of exhaustion after a year of surgeries, recovery upon recovery - all of this for just our warrior princess. Amazing how it all of a sudden hits how exhausted in all realms one is!
Dannette