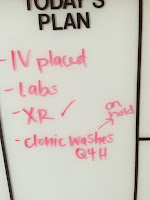 An abdominal x-ray was done right away last night, we could still see all of the things from the sitz marker testing.  An IV was placed (I demanded/politely asked for the IV team since he is still pretty poked and bruised up from the last stay).  Labs were done.  He is on gut rest, meaning no food. 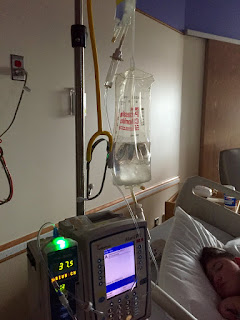 Shortly after being admitted, the plan to clean him out was put in place.  Start with an enema and then colonic washes several times throughout the night/day, till all things came out clear.

Brayden made it as far as one enema and one colonic wash.  They were able to get some stool out.  Then labs were done.  He did not handle the enema and colonic wash very well.  His electrolytes were starting to take a hit.  His potassium was not looking good.

Everything was stopped.  They added potassium to his IV fluids and stopped any sort of cleaning out.  And he was put on more monitors.

Things settled down at some point in the wee hours of the morning.  I have no idea because I crashed out on the couch.

Morning came and time for the doctors.  In walks my not-so-fav GI doctor (really, this guy?) who was with us during the PICU stay.  He was the one who prescribed a daily dose of Miralax when he discharged us from the PICU a few weeks ago.  Well, clearly that did not work and we are back (which I tried to explain/reason with him during the PICU stay). 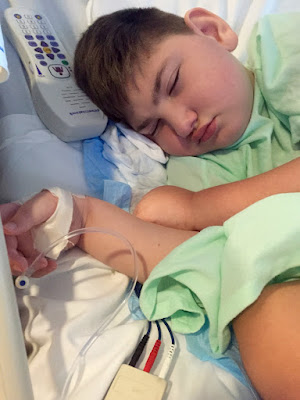 Thankfully this visit seems to be led by the GI motility team.  They do not work on the floor but they are working with this GI doctor to make sure we are all on the same page, in theory.

By the afternoon more potassium was given.  More labs done.  His potassium lab came back looking better.  So things have started back up but not as aggressively.  They are trying to clean him out with an hourly dose of GoLytley.  The GoLytley was started several hours ago (and will continue through midnight) but there has not been a bowel movement, ugh.

The goal is for Brayden to be ready for a colonic manomety test on Thursday.  This test should be able to tell us more specifics about the strength of the muscle contractions inside Brayden's colon.

Brayden has been sleeping a lot but he did not get much sleep last night.  He has been moderately comfortable, lots of gagging/retching.  His sleeping at least gave me the chance to head to the cafeteria and a quick walk outside. 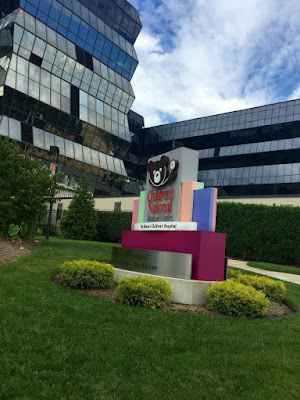 Pray Brayden is ready for the colonic manometry testing done soon.  We need to get a full assessment of Brayden's GI system sooner than later so the doctors can start making a real plan to deal with his severe lack of motility.  Pooping is a very important part of life.