Well, not really skiing with Brayden but he did sit in the lodge.

Yet another canceled day of school because of the winter weather.  Yet another day of nothing to do, with all activities canceled.  Jeremy was out of town.  It was a day with no nurse.  Carter and Luke wanted to go skiing.

A very last minute decision to load up the car with ski gear and head out.  Brayden loaded in as well.  But Brayden had other ideas, he was told that snow days meant lazy days in bed...so why was he out in this cold yucky weather?! 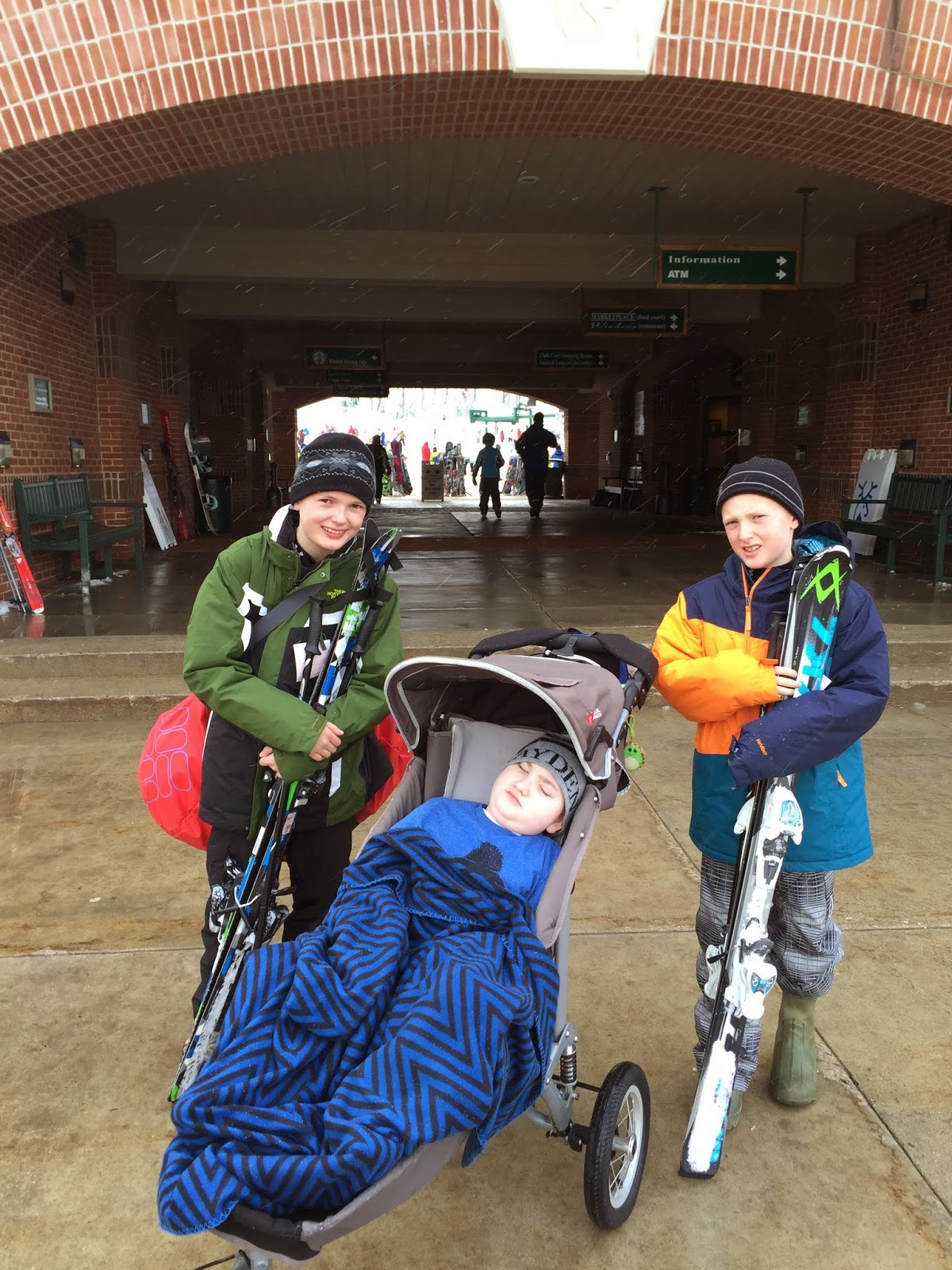 Brayden decided to let us know his dissatisfaction with being out...he let us know for the entire hour drive...on and off screaming...it was a very long drive.  Then when we are almost to the exit for ski slopes, Luke pipes up from the back of the car, "Mom, did you get our passes?"  I did not get our season passes for skiing, they were sitting in the kitchen...oh how I hoped I did not have to pay for skiing that day when they had passes sitting at home.  I was consumed with getting all of Brayden's gear for the day, it didn't even occur to me to get the passes.

We arrived and circled the parking lot looking for a handicap space.  I needed a space to unload Brayden and not have to navigate a couple flights of stairs.  Obviously there are not many handicap spaces at the ski resort.  And those handicap spaces were the "extra" spaces where the snow was pushed when clearing parking lots.  I had a choice of two spaces.  One space that was 1/2 covered with snow and the other that was 3/4 covered with snow.  And the snow piles were on the side of Brayden's door.

I pulled into the 1/2 snow covered handicap space, sticking out a bit so I could unload Brayden.  I have the handicap tag hanging from the rear view mirror. I barely turned off the car, when I realized an SUV pulled right up next to mine.  I rolled down the window.

A man (not a gentleman) asked me to move spaces.  I started to explain about the snow, trying to unload my son into his wheelchair, and the space I needed.  Well, that man was NOT interested in my explanation or anything I had to say.  He proceeded to give me a piece of his mind and had some choice words for me.  I was flabbergasted.  He pulled away in a HUGE huff, saying "Well, I guess I don't get to come today and will just to go home!"  Off he went.

I could not believe a grown man (about 50-60 years old), came up to a mom with three children in the car (a car with a handicap tag) and proceeded to yell/scold about parking...basically he deserved that space more than we did.  Not only did it fluster me, it flustered Carter and Luke.  They were upset and worried.  I tried to reassure them there was nothing we did wrong and there was nothing else the man could do...but just in case I reported it to the main office.  And we already had to go to the office since we forgot the passes, thankfully they printed ones for the day.

Finally in the lodge and it was packed.  Where to park and sit with Brayden?  Finally a family cleared a space for us.  They realized the difficulty of space in the lodge as well because the grandmother was in a wheelchair.  Their kindness was appreciated after the no-so-kindness we encountered in the parking lot.  Although,  I wondered if they may have regretted the decision since Brayden was not a happy camper for the day.

Carter and Luke had a blast.  Lots of time on the slopes together, trying out all of the slopes (I made them promise no black diamonds when dad is not here).  It was a cold windy day so I was happy to be in the lodge with Brayden in my lap keeping me warm. 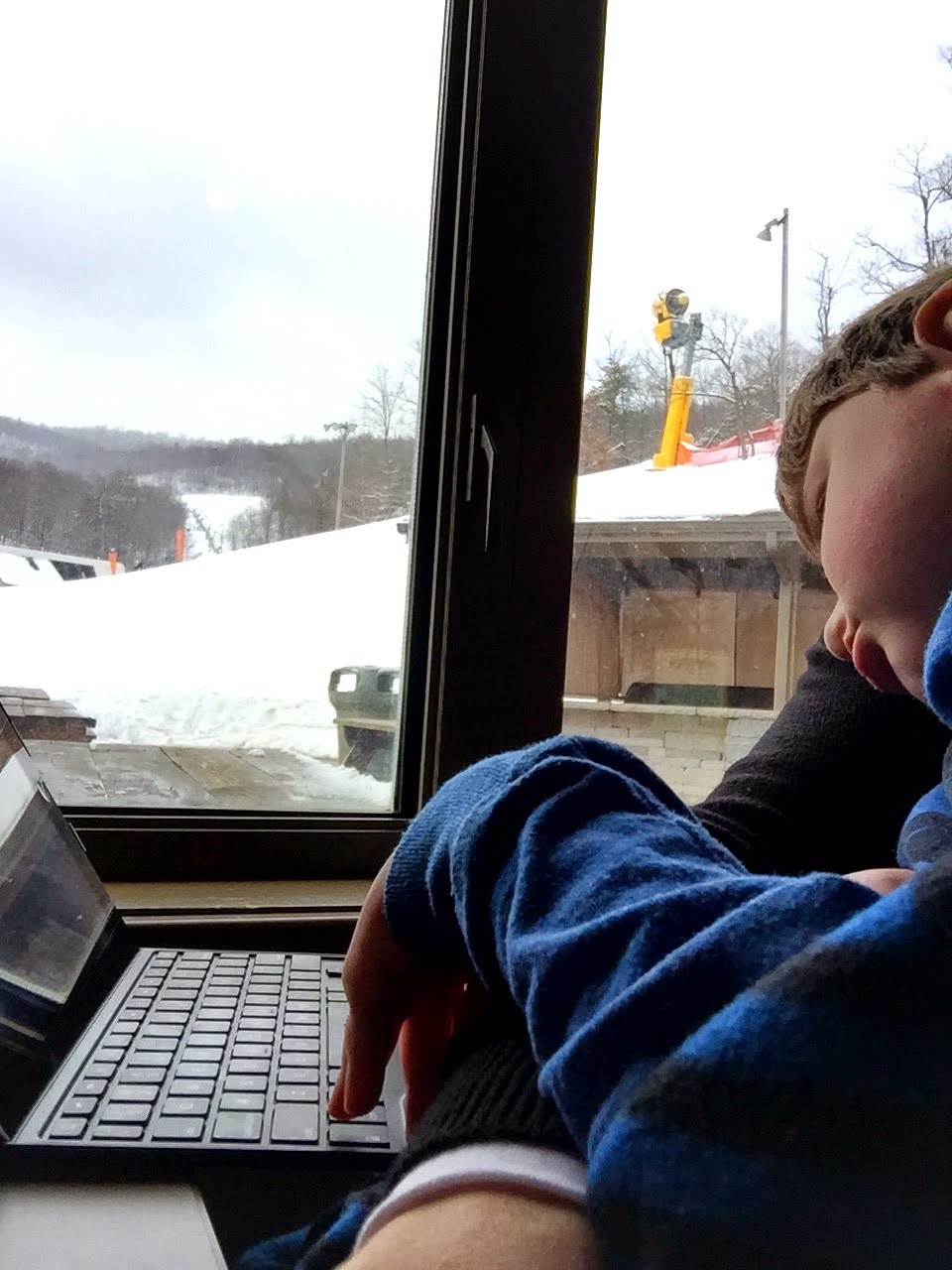 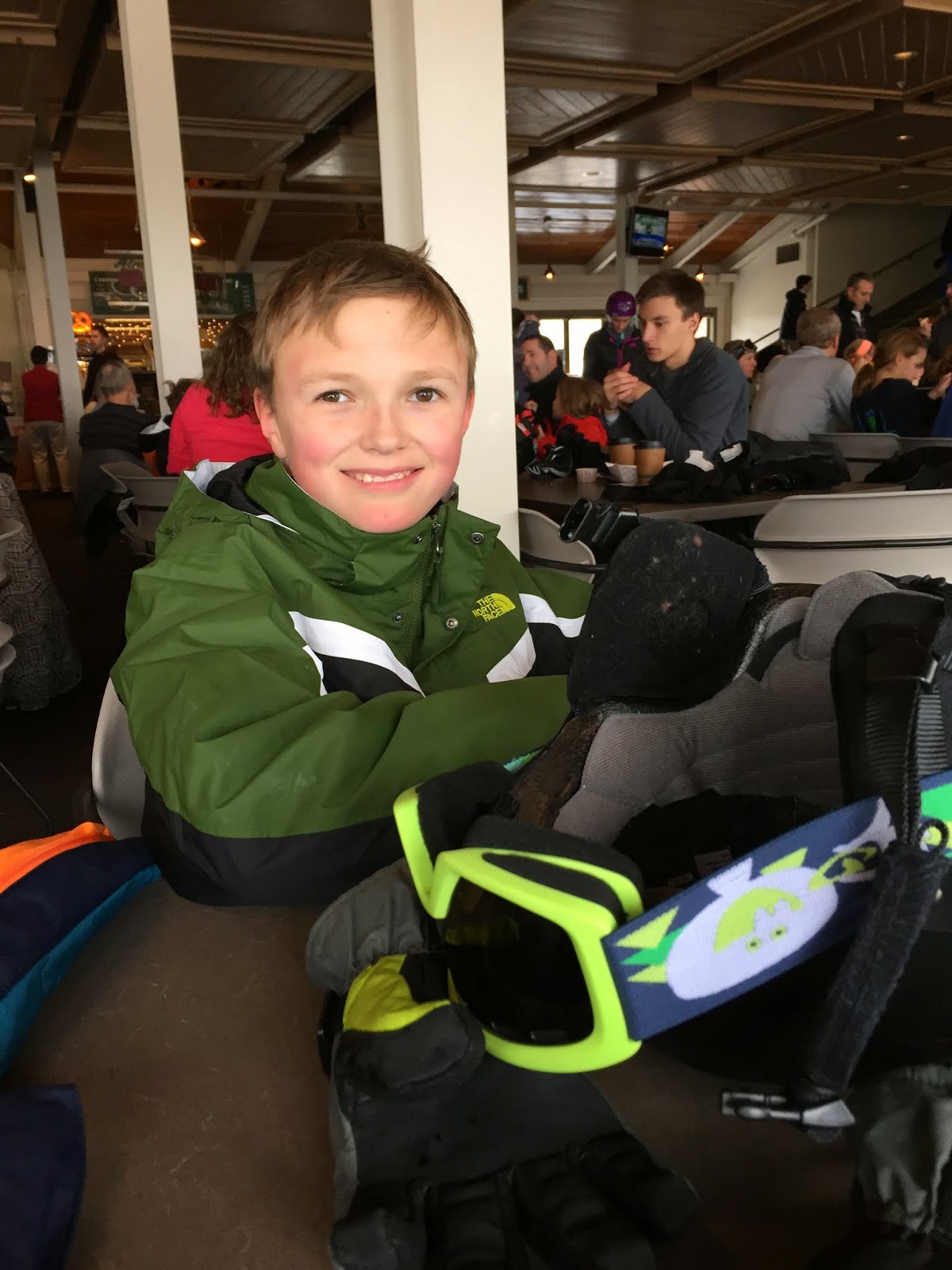 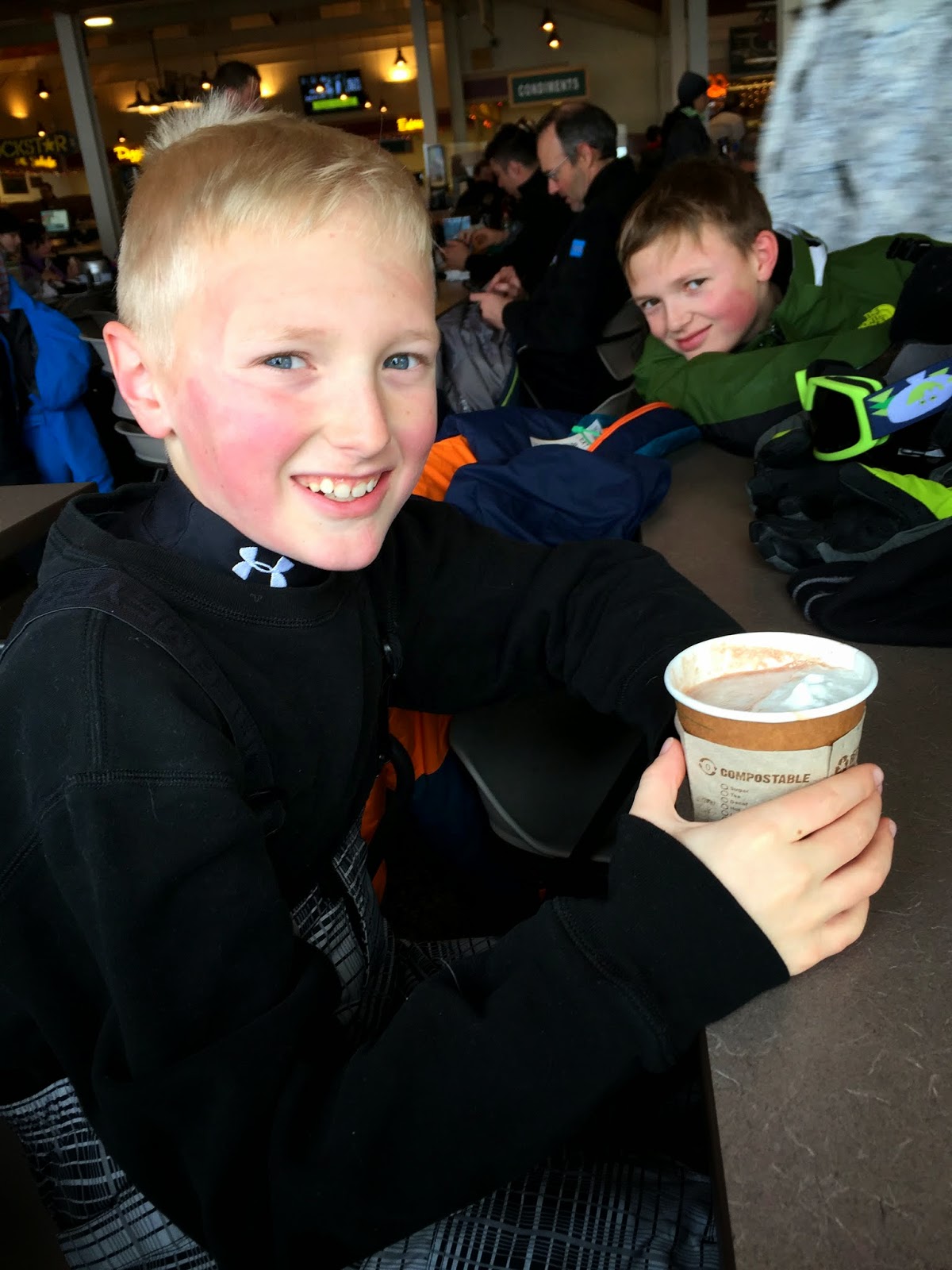 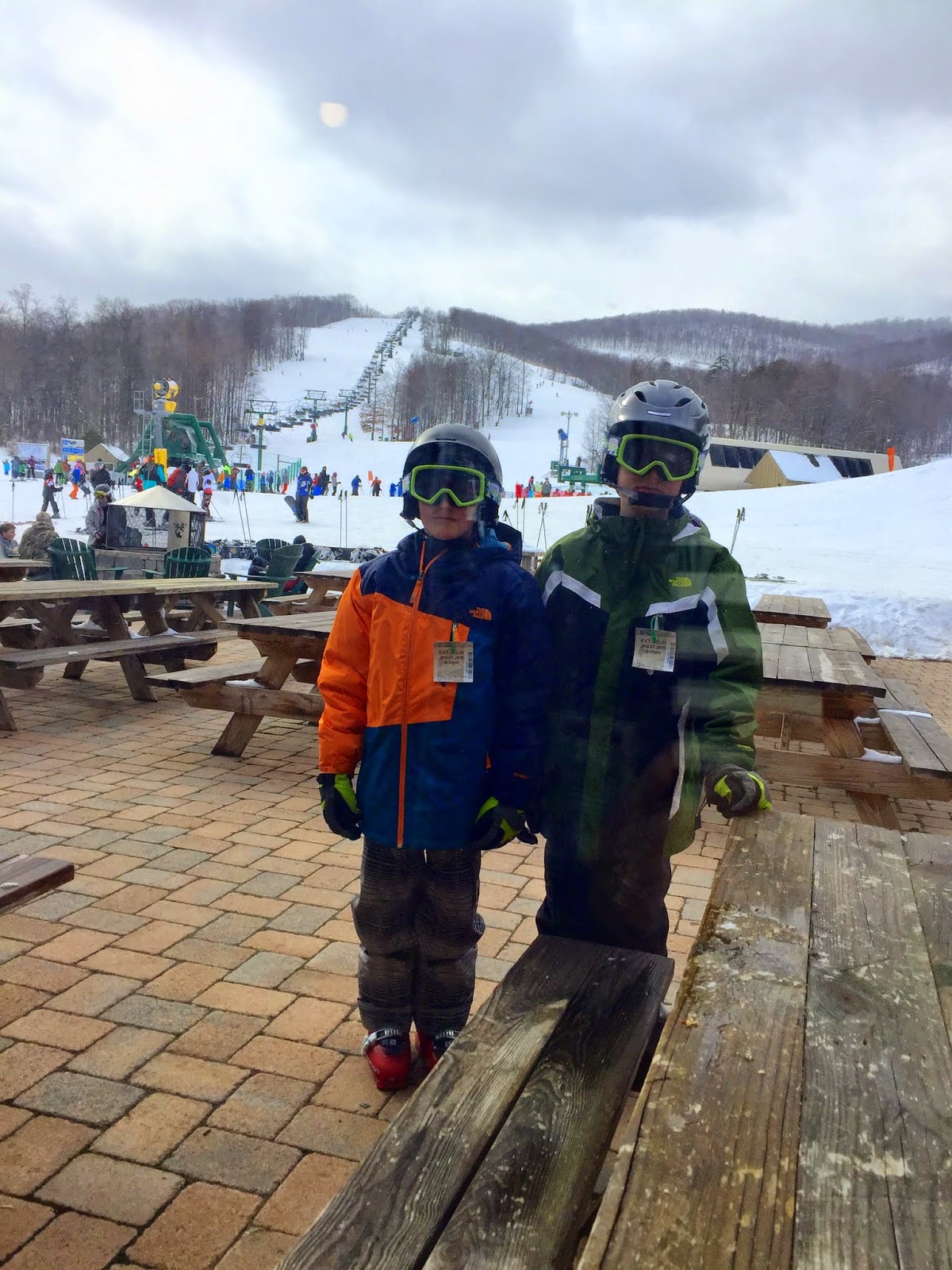 After a long day, Brayden was exhausted...like he was the one skiing all day but apparently being very grouchy is exhausting. 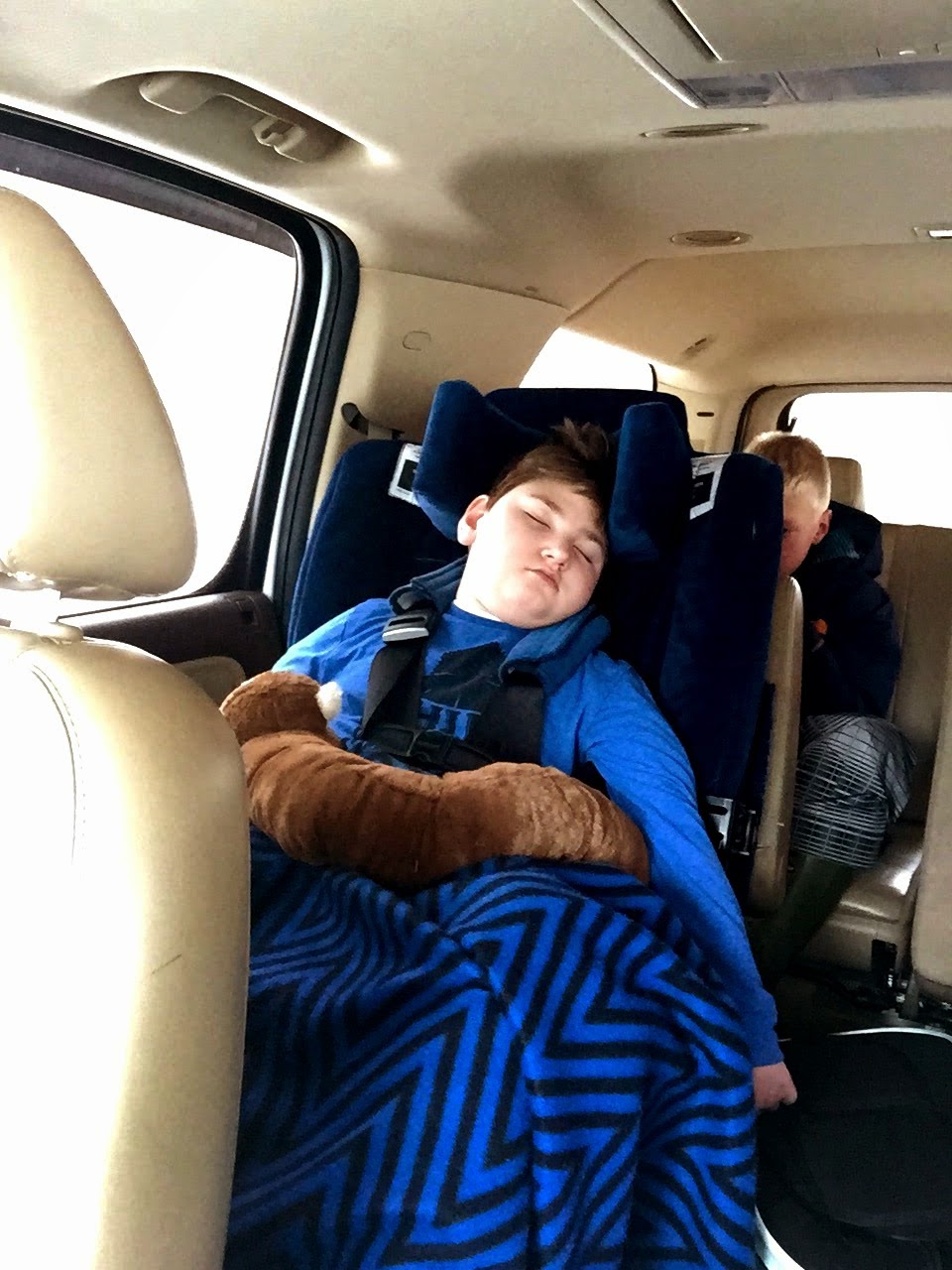