And not the good kind.  I used to get daily doses of adrenaline rushes from Brayden.

We have settled into a routine with Brayden, we can even handle the "routine" seizures and not be too frazzled by them.  Last night was one of those hear pounding, adrenaline rush moments while watching him go through a seizure.

My oldest had a football game.  Brayden already had a long day of doctor appointment, school and then (much to his dismay) a weeknight football for his brother.  Brayden settled in nicely at the game but as the evening went on he became more upset.

By the time the game was over, Brayden was screaming mad.  My father-in-law pushes Brayden around most of the games and this was another night Brayden was working his grandpa for some constant pushing in his jogger stroller.  As it came time to load Brayden in the car, I realized that he was not just crying he was seizing.

It was the awful ugly seizure where he screams and cries like he is trapped.  A cry that is like a high squeal, a sound that Brayden only makes during these seizures.  He then started pounding his head against the car seat.  Screaming and crying with the pounding...my heart was pounding.

The majority of Brayden's seizures do not upset him in anyway.  But this seizure...he sounds terrified.  And it upsets me to see him go through it.

I drove home with Brayden and his other brother, Luke.  Brayden screamed/cried and continued to pound and thrash his head.  All of sudden the screaming stopped and not in a good way.  I started shouting to Luke, "Turn on the light!  Is Brayden still breathing!"  Just as I said it, Brayden started screaming and crying again.  Then he went silent again.  I asked, in a not-so-calm manner, for Luke to check Brayden again.  He seemed to be breathing but he looked as though he was trying to fight his way out of the seizure.

We arrived home and scooped him out of the car and went straight to his bed.  He continued to seize but then stopped.  He was wiped out.  I did not give him any extra medication.

He slept great (and I checked on him many times).  I could not get myself to calm down.  I feel so helpless when he is seizing like that...and I am planning in my head how to handle a trip to the ER, thankfully he did not need it this time.

This morning he started again with seizure activity; some of his daily seizures with a dash of these "disappearing" seizures, where his face gets stuck...no moving, no blinking, he just disappears.

He was stuck in this look for several minutes, no matter what I did to him (which includes loud clapping, squeezing and kissing his checks, sitting him up, etc.) 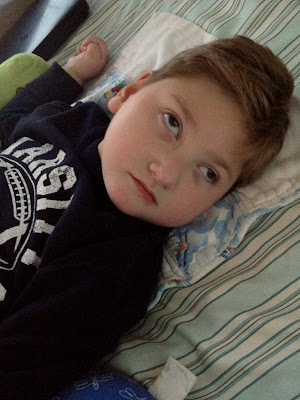 He came out of the seizure and then went on to have a great day...even at school.  As for me, I called his teacher to warn her of his seizure activity.  I hovered around Leesburg today anticipating a call from his school (and did not get one, he was fine).

No need for this kind of adrenaline rush...I am content with riding an actual roller coaster for that and not watching Brayden go through these seizures.
Posted by Jenkins at 5:15 PM