We stayed at a place right on the beach.  We rented an umbrella and chairs for the week.

Every morning we started at the beach (sometime around 8:30 a.m., after going out for breakfast).  Not many people on the beach for a couple of hours, just joggers/walkers and some people fishing...and of course a few other families that were blessed with early risers and started at the beach early too. 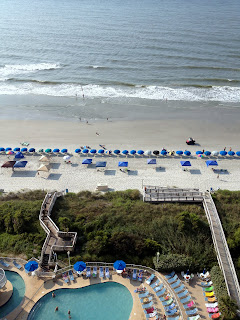 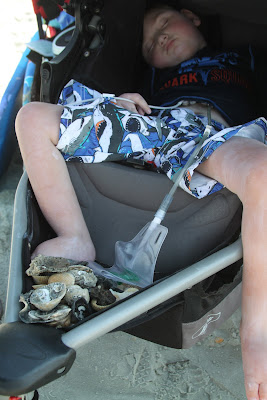 Carter and Luke would wander from playing on the beach to riding the waves.  Jeremy and I would take turns on who was in the water with the boys.  Brayden was always parked under the umbrella, peacefully enjoying the sounds of the beach.  He would usually enjoy a nap.

One morning (sometime 8:30-9:00 a.m.) Jeremy was in the ocean with Carter and Luke.  Brayden was under the umbrella settling in for nap.  I scooped up my camera and stood on the water's edge to take a few pictures of the boys.  My camera was fogging up from the humidity so I only took a few pictures.  I came back to the umbrella and was talking to Brayden, when a police man (the beach police that drive up and down the sand) approached me, peaking under the umbrella to see me. 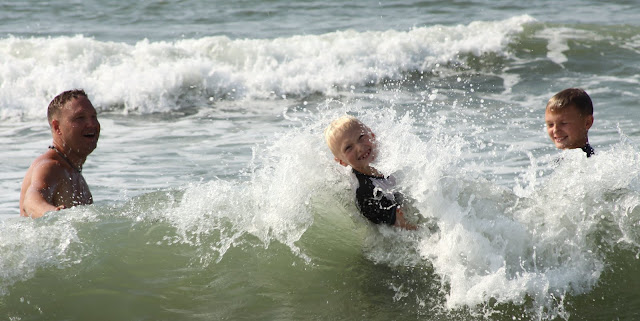 Officer:  "Ma'am, it was reported that your child was left unattended." (referring to Brayden)
Me:  "I am sorry, excuse me?"
Officer:  "Ma'am, someone was concerned and reported that your child was upset and left unattended."
Me:  "While I appreciate some one looking out for children, we have been here the entire time.  I did walk to the water to take a few pictures."
Officer:  "This is a safe beach but please make sure you keep an eye on your children."
Me:  "Ok, thanks."
And he said some other things but I was not listening quite so well at this point because I was focused on the part when some one said my child was left unattended. 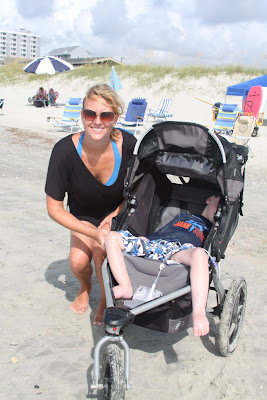 Kind of jarring.  We have no idea who said anything.  Why anyone would have thought he was left unattended; maybe someone walking on the beach?  a lifeguard?  Some one from the hotels/condos looking down at the beach?  There were not that many people on the beach that early in the morning.  And someone thinking Brayden was upset was really just his happy 5 year old noises, not a little baby crying.

The funny thing is...Brayden and I are attached.  We have been attached from the moment he was born.  The only break I get is when we have his nurse.  He is the most "tended" to person in our family.

Oh honestly, some people just take it too far. One woman in QLD was reported for leaving her 3 children in a car for less than 10 minutes while she ran into a shop to quickly buy something. She was gone less than 10 minutes, her youngest was 3 yrs old, the oldest was 12. It was undercover parking, and they were not left in the heat. Someone reported her and she came back to find a police officer ready to charge her. The charges were dropped in the end, but I felt so sorry for the lady. Some people really do go too far and just like to make life difficult for good parents.

Carrie - I love the picture of the shells that Cater and Luke must have gathered for Brayden. Such nice brothers!!