This trip was a quick one.  Drive to Outer Banks Monday and drive home on Thursday.  We were invited to stay with our friends during their vacation.  I loaded up the car with Luke (my middle boy) and Brayden.

Brayden has been at a really good place, medically.  No major issues, no emergencies, etc.  I felt pretty comfortable going away (without the help of Jeremy or the nurse) for this quick trip.  For any previous trip that we have taken, I make lists.  Lists of everything Brayden needs.  I meticulously pack everything and check things off the lists one by one.  A few times in the past, I have emailed a couple of Brayden's doctors to let them know we will be heading out of town, in case they get a call of random hospital.  I usually find the location of the nearest hospital...just in case.

This trip, I packed quickly...not from lists, just from memory.  I also made no plan for any emergencies.

Brayden did like the ocean.  Very relaxed on the beach. 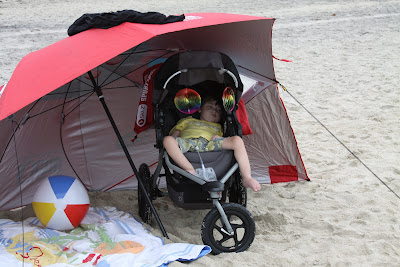 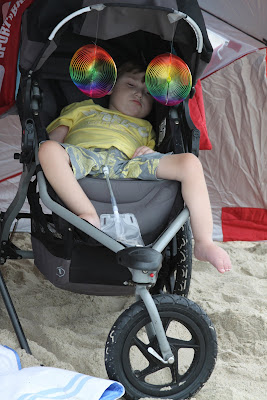 Loved the king sized bed and lots of kids climbing in bed with him (he loves attention).  Loved laying bed, with the door open listening to the sounds of the ocean. 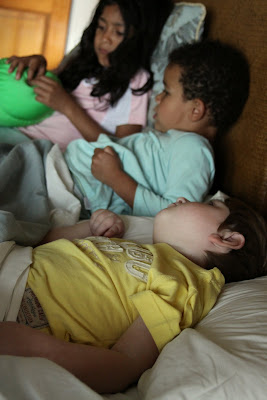 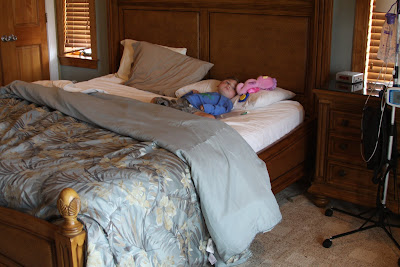 One night, he was upset and I could not calm him.  I tried to snuggle him but he was thrashing around.  I thought he did not want to snuggle and he was trying (in his own way) to push me away.  He continued to be awake through the night.  Luke and I left him in bed and headed for the living room couches to get some sleep.

I checked on him in the early morning and realized that he was having a seizure and was probably having one since the middle of the night.  I gave him all of his morning medications, hoping that they would take effect and help control this seizure.  The seizure continued.  I needed more medication, that I did not have and did not pack.  I called one of Brayden's doctors.  She called in a prescription to a pharmacy.  I left Brayden at the house (watched by a few adults who care for another special needs child).  I drove 40 minutes to a pharmacy that did not have the medication.  I spent more minutes calling pharmacies to find one that did have the medication.  Then I followed the GPS to the wrong location (I wanted CVS and it kept taking me to Rite Aids).  I finally got the medication and drove back the 40 minutes to the house.  I was not taking him to the little Outer Bank hospital.

When I arrived back to the beach house, it seemed as though the seizure was stopping.  I still gave him the medication.

We had planed to drive home that afternoon (and my friend ride with us).  Brayden SCREAMED for the first couple hours of the trip.  Then he went into another long seizure.  We had to stop and give him yet another medication.  I was bordering on giving him too much medication but I did not want to go to a hospital that was not one of his normal ones (Inova Loudoun, Fairfax or Childrens).  The medication did work and he passed out asleep/snowed by medication.

I gave myself a headache and some new/deeper wrinkles from the stress.  We finally arrived home.  I HATE seizures.  Really, really hate them.  I hate what they do to his body.  I hate that he looks trapped and sometimes it seems like he is screaming for help.  I hate that I cannot do enough to help him.

We did have a nice time at the beach.  Just not a nice ending.
Posted by Jenkins at 8:41 PM

Sounds like things went really went up until the end. So sorry that your vacation ended on such a stressful note! I am with you on seizures - HATE them!

What stress! Sorry you had to go through all that! Glad you got to enjoy part of your trip though!