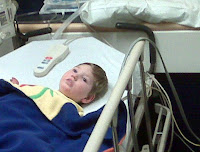 Late yesterday afternoon we had to call to 911 for Brayden.

Jeremy was on his way home from work. I was getting the boys ready to go out for dinner and run errands with Jeremy. I left Carter and Luke playing outside (not the best idea, they ended a muddy mess from the snow and ice melting) while I went to get Brayden up from his nap. I walked in Brayden's room to find him in the middle of a seizure. I continued to pack up his things to get ready to go. I looked at him...still seizing. I ran downstairs to grab something, came back to Brayden's room...he was still seizing. Just then Jeremy came home, we decided to give him the Diastat, a rectal dose of heavy duty anti-seizure medication to be used in case of prolonged seizures.
Brayden had the Diastat.
We waited.
He was still seizing.
We were told that if the Diastat does not take effect in 15 minutes to call 911. It had been 15 minutes since the dose of Diastat, seizing for 25+ minutes total, so we called 911.
The ambulance quickly arrived. A couple of the EMTs knew us from our previous calls. Sad right? The EMTs are starting to know us?! In our defense, we live in a small community and only called 911 three times, it just happens to all be in the past 9 months.
As the ambulance was pulling up to our house, Brayden finally came out of the seizure. It lasted at least 35 minutes. FYI, his usual seizures are only 15-30 seconds. Take a moment to slowly count to 30, that feels like a long time to have a seizure. Now imagine 30 minutes. There has only been two other times that he had seizures last that long and both times ended up at the hospital with heavy duty meds (Do they give parents Ativan to calm down?).
The EMTs asked us if we still wanted to take him in. We said yes for fear that the seizure might not be under control yet. Brayden and I loaded into the ambulance and headed for the hospital. 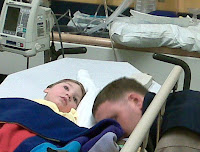 Once we were in the ER, Brayden was acting himself. They ran some tests to check for illnesses since he has been congested. Everything came back fine. The doctor seems to think that since Brayden has had a bad cold, his threshold for seizures is lowered and caused the prolonged seizure. And I am thinking that if just a cold causes a seizure like that, what happens if he actually gets sick?! We don't know yet because thankfully Brayden has never really been sick.

After 4 hours in the ER (our shortest hospital trip with him), we headed home.
Back to normal life.
Being bored in the ER, I was playing around with features of my new phone thus the photos. I have stepped into a whole new world with Blackberry!
Posted by Jenkins at 7:32 AM

For a while we came to know the whole ER staff on a personal basis we were there so often with Regan. I am so sorry that you had to go through this again, and it would make me panic on if he became really sick.

we are thinking of you and sending you all, all 5 of you, well wishes. what a strong family you have. love to everyone.

I think of you adn your family everyday now that I have"found" you again thru FB! I am so amazed at teh strength and patience you show raising your family, and I am learning from you to take things one day at a time and to look to God to help us through the times we just think we can't handle alone, and he will give us what we need.

He's taking after his great aunt Mary...her 911 knows her too! Hang in there!! Debra

I just found your blog today on the Life of Logan site, and was surprised to see Evan Weise's name--it is a small world! We "know" Evan and his mom as well--my son Dakin suffers from the same really rare NMD as Evan. Just thought I'd introduce myself and say hi. I'll be following your blog. Your little man is beautiful and I hope he can stay at home!!!